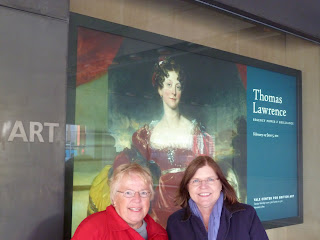 Last week I was fortunate enough to visit the Yale Center for British Art to view the art exhibit, Thomas Lawrence: Regency Power and Brilliance. I must credit Victoria Hinshaw of Number One London with the idea to go to New Haven for this exhibit. The only other time this collection of paintings was shown was at the National Portrait Gallery in London.

Every year Vicky visits Washington, D.C., and we have lunch with my friends Julie and Carol. The four of us went on the same tour of England in 2005 and we’ve been friends ever since. This year we not only had lunch, but Vicky and I conned my husband into driving the two of us to New Haven (6 hours from here) on Thursday and back on Friday so Vicky could get her plane home on Saturday. The dh thought we were crazy but he went along with the scheme!

Vicky had also contacted the Public Relations staff for the exhibit and so when we arrived we were treated as VIPs! But even if we hadn’t been welcomed so warmly, the exhibit would have been worth it. It was spectacular!

Thomas Lawrence (1769-1830) began his art career in Bath at age eleven when he supported his family by selling portraits in pastels. At age eighteen, he moved to London and trained for three months at the Royal Academy. By age twenty-one he exhibited twelve portraits, including this one of Elizabeth Farren, and actress who eventually married the Earl of Derby. 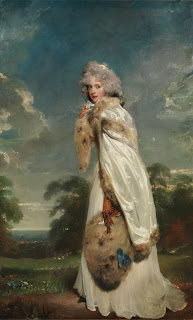 This is my absolute favorite of all the portraits and that is saying a lot, because there were so many beautiful ones.
This painting is on loan from the Metropolitan Museum of Art in New York City.
Here is another beautiful lady on loan from the Art Institute of Chicago, Isabella Wolf. 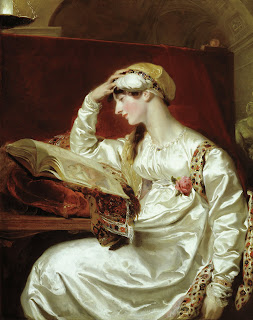 Isabella Wolff was an intimate friend of Lawrence’s. Some say she bore him a child, although there is no conclusive evidence that this was true. Certainly she was a long time friend. This portrait was thirteen years in the making.
Here is another one on loan from the Albright-Knox Gallery in Buffalo, an image of Rosamund Hester Croker, later Lady Barrow. 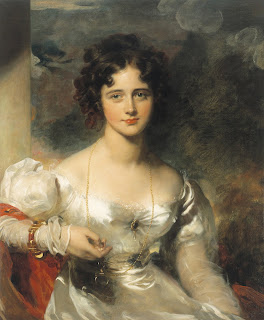 The portrait of Miss Croker was exhibited before she was presented to society. You can imagine it attracted a great number of gentlemen admirers. It figured in the arrangement of her eventual marriage to George Barrow, oldest son of Sir John Barrow, author of Mutiny on the Bounty.

Dated 1827, the portrait is a bit later than the Regency, but, to me, she epitomizes a Regency heroine.
For more about Thomas Lawrence, read Jo Manning‘s blogs on him at Number One London.
And if you can get to New Haven before June 5, the end of the exhibition, GO!!!!
Vicky and I toured the exhibit twice. Once upon arriving at Yale on Thursday and then again the following morning before we had to leave. I rather wish I could go through it again….
Today I showed you some of the beautiful ladies of the Lawrence exhibit. This Thursday on Diane’s Blog, I’ll share some of the gentlemen who could possibly be heroes in a Regency romance.
And I’m giving away a prize! Some postcards from the gift shop of the Yale gallery. Comment here and on Diane’s Blog for a chance to win. Winner will be announced on Diane’s Blog next weekend.
Tell me which of the ladies above is your favorite. Or tell me what has been your favorite experience with art. Or anything!!
And visit Heroes and Heartbreakers for my first blog with them, The Naked Truth: Courtesans in Real Life vs. Fiction
0 0 votes
Article Rating
Subscribe
Login

What a super post today! I loved seeing the beautiful portraits, the amazing ability of the artist to make the gowns look like real cloth you could actually ‘feel’.
And I’m grateful for the link to Number One London. What a great blog, and now I’m a follower there too. Wish I could see this exhibit.

I tried, but I can’t choose. I like each of them for different reasons. The clothes in all of them, as Linda pointed out, are remarkable. I find it interesting that the actress looks quite pensive and not confident at all. His supposed lover looks bored or exasperated, while the innocent miss looks a bit world weary. Or they may all be saying, “Do hurry up!” 🙂

I loved wandering through the museums in London.

I’m just praying for the exhibit to somehow be extended for another month so I can get to it while I’m on the East Coast for RWA!

Linda, viewing the art itself and not just an image, the fabrics are even more amazing. (Glad you are following Number One London!)

Judy, to me, Farren looks as if the artist caught her by surprise as she was walking. I suppose Isabella would have been pretty bored after thirteen years of posing!!
“Do hurry up.” fits her to a T.

Susanna, even if the exhibit is not still there, you can go to the Metropolitan Museum in NYC and see the Elizabeth Farren portrait and others.

This post has left me speechless. The paintings are just so beautiful I cannot stop looking at them. New Haven is 9 hours away from me…….but I’m still seriously considering the drive.

I cannot tell you how envious I am that you got to see this fabulous exhibit!! I love Lawrence’s work and so wish I could see the exhibit. Thank you for sharing your trip with us!

I think the last portrait is my favorite. I like the idea of her being captured before embarking on the stage that was Regency society. There is something in her face that speaks of anticipation and also worry that it won’t live up to her expectations. Lawrence just has a way of capturing his subject’s thoughts on canvas.

And onelondonone is one of my favorite places to visit !! Fabulous blog and I could spend hours touring all of the little features on it!

The most memorable art exhibit I saw was the Vermeer exhibit in Washington DC about ten years ago. I went twice. It was a wonderful experience, seeing all the paintings together.

Rachel, I hope you decide to go!!! If you do, be sure to go to Yale’s rare book library, too. They had a great exhibit on Psychiatry. Maybe I’ll to a blog on it, too. But you can see a Gutenberg bible and I’m sure other treasures.

Louisa, if you get to NYC for RWA, we should go to the Metropolitan Museum to see Elizabeth Farren’s portrait. She should be back. viewing the actual art makes the subjects seem even more alive.

Janet, I would have loved to see the Vermeer. There is a terrific Canaletto exhibit at the East Gallery in DC. Might do a blog on that, too.

I’ll have to say Miss Croker is my favorite. She is a lovely young woman with the look of sweetness about her.
These paintings are gorgeous. What amazes me it the texture and feel the painting have. The white clothing in all three pictures has an iridescence to it.
It is really tempting to make a trip up to see this exhibit. 6 hours would be no big deal. It would however, be more of a 14 hour trip for me to make it up there. We have two other trips planned already this year and neither are even remotely close.
I am glad you got to see it.

I luckily got to see this is London in December. Also a Caneletto show. Wonder if it’s the same one you mention. I’m green with envy of Janet about the Vermeer exhibition ten years ago.

Of interest to Regency buffs was a Turner show at London’s Tate a couple of years ago. It showed work at different times in his career, alongside works he is known to have seen. Really interesting curation.

I’m an art show geek. There’s little better than wandering through the permanent collection at the Metropolitan Museum, or the Frick Collection. Heads up for RWA in New York.

You are definitely on for a trip to see Elizabeth Farren’s portrait during RWA !

Never knew about Thomas Lawrence, but these portraits are stunning. Have to check out some more…

The exhibit must have been very moving. I like Isabella the most.

Miranda, the Canaletto show was “Venice: Canaletto and His Rivals” http://www.nga.gov/exhibitions/veniceinfo.shtm

Louisa, I feel a field trip is definitely on the agenda!

Kirsten, I hope you get to view some of these paintings in person someday, but thank goodness for the interet where we can see great art from museums all over the world!

Miranda, the Canaletto show was “Venice: Canaletto and His Rivals” http://www.nga.gov/exhibitions/veniceinfo.shtm

Louisa, I feel a field trip is definitely on the agenda!

Kirsten, I hope you get to view some of these paintings in person someday, but thank goodness for the interet where we can see great art from museums all over the world!