So I now have 17 days to get to the end of this WIP! How did that happen?? Last time I looked it was January and I had weeks and weeks until deadline, but it always happens this way. Now I am living on green tea and protein bars as I try to wrap up the story arc, but I’ve enjoyed spending time with these characters in this time period, learning more about Mary Queen of Scots and life in Scotland in the early 1560s.

There are so many things I love about the Elizabethan period–the raw passion of the era that inspired such a golden age of the arts (there was never a time when more genius poets and playwrights and composers were living in one place at one time!), the clothes, the strong women, the dances, the earthiness and bawdiness. It can make such an exciting backdrop for romantic tales! And since I have no creativity left in the well at the moment, I will turn this post over to Shakespeare, the personification of the era. 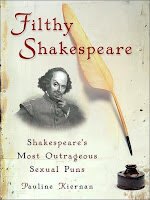 Warning: Dirty words ahead! But they’re Shakespeare so they’re good for you… One of the books I got with my Christmas giftcards is a delightful look at Shakespeare’s real themes–Filthy Shakespeare: Shakespeare’s Most Outrageous Sexual Puns by Pauline Kiernan. I laughed so hard at some of them I almost fell off my chair. It’s too bad they don’t teach this stuff during the obligatory Shakespeare unit in high school–I’m pretty sure it would catch students’ attention in a big way….

The Introduction features a quick look at life in the Elizabethan era, the major role the theaters played in everyday life, the importance of espionage and codes, and bits like “Dildos and the rediscovery of the clitoris,” “Women win the prize for raunchy punning,” “The Bard makes up a new word or two, or three thousand and counting,” and “Shakespeare’s sexual puns sizzle” where the author states “Shakespeare’s sexual puns are sometimes simple, often complex, and range from the cheeky and playful to the blatantly filthy. A ribald joke…is invariably a means of revealing character, creating mood and tone, exploring the moral world of a play, or even forwarding the action. He can offer straightforward, obvious sexual quibbles like other playwrights of time, but he often does something more…expressing subtle, ambiguous interpretations of a character or a situation where we are not quite sure of the precise meaning. Creative, inventive, clever wit makes many of his sexual puns sizzle.” (There’s also an extensive appendix at the end listing Elizabethan slang terms for sexual acts and genitalia–very useful!)

I knew some of the hidden meanings in Shakespeare’s plays and poems from my college work, but many of these took me by surprise or were deeper than I imagined! Here are a couple of the cleaner examples I came across:

Portia: They shall think we are accomplished
With that we lack. I’ll hold thee any wager,
When we are both accoutered like young men
I’ll prove the prettier fellow of the two,
And I’ll wear my dagger with the braver grace,
And speak between the change of man and boy
With a reed voice, and turn two mincing steps
Into a manly stride, and speak of frays
Like a fine bragging youth, and tell quaint lies
How honorable ladies sought my love,
Which I denying, they fell sick and died…

Nerissa: Why, shall we turn to men?

Portia: Fie, what a question’s that
If thou wert near a lewd interpreter!
But come, I’ll tell thee of my whole device
When I am in my coach…

Portia: They’ll think we’re equipped with pricks which we haven’t got. I bet you anything when we’re both dressed like young men, I’ll prove the sexier of the two, and wear my false penis with its most fine erection. I’ll certainly be well-hung. I’ll turn two mincing steps into a manly stride, and speak of sexual conquests like a youth talking out of his arse, all cock and codpiece, and tell quaint lies about the cunts of chaste ladies who wanted to make love to me. Ladies who, when I turned down their advances, crouched down and begged to be f*****

Nerissa: What, shall we turn into men and f*** women?

And from the chapter “Pertaining to Virginity” from The Tempest:

Prospero: Take my daughter. But
If thou dost break her virgin-knot before
All sanctimonious ceremonies may
With full and holy rite be ministered,
No sweet aspersion shall the heavens let fall
To make this contract grow; but barren hate,
Sour-eyed disdain, and discord, shall bestrew
The union of your bed with weeds so loathly
That you shall hate it both.

Prospero: Take my daughter, but if you break her virginal membrane before all sacred ceremonies are carried out with full and holy ritual, no sweet-tasting showers of semen shall the heavens let fall to make this marriage grow. Barren hate, cruel-eyed disdain and discord shall be strewn on the union of your semen with weeds so abhorent that you shall both ending up hating to have sex.

And that doesn’t include anything from the other chapters like “Pertaining to the Clap” or “Pertaining to Brothels”! What are some of your favorite “dirty” works in literature? And what are you planning for St. Patrick’s Day this week???

(Here are a few Shakespearean scenes to enjoy for your Tuesday! The last clip from Get Him to the Greek is not, of course, strictly Shakespeare, but Aldous Snow struck me as a weirdly modern Shakespearean character–plus the song is hilarious)

Looks like no one is on the blog today! 🙂 So I will add that as well as Shakespeare I quite like “Lady Chatterley’s Lover” (and somehow end up watching every movie version too…)

Wow. Things are quiet today. I’ve been writing all day (well almost all day. Also cleaned my “book” room a little because I have to find all the papers for our taxes.

Loved this take on Shakespeare!

Lady Chatterley’s Lover was an important book for me. I loved it so much I decided to do an independent study on D. H. Lawrence in college. Can’t remember a thing about it, though.

I have to admit I DO love Shakespeare’s way with innuendo and his dirty insults!

And Lady Chatterley’s Lover is another favorite.

I guess some people would consider the Kama Sutra dirty, but I’ve always found it rather enlightening.

And I’ve been a fan of the poetry of John Wilmot, Earl of Rochester, for quite some time.