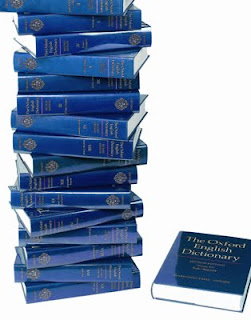 There’s nothing that can pull you out of a good historical like an anachronism.

Of course, that can be taken too far; which among us has not rolled our eyes (if not literally, then mentally) when some member of the Historical Police has said that something could not POSSIBLY be because it didn’t exist until a year later.

To which I always say, “It’s fiction. Deal with it.”

(That doesn’t excuse just missing or poor research, such as when a Duke is called My Lord instead of Your Grace, or if a divorce is regarded as blithely in a Regency romance as it is today.)

But there are circumstances, certainly, where things existed prior to being documented. For example, language. Many of us Regency authors own Captain Francis Grose’s 1811 Dictionary of the Vulgar Tongue (I have two copies, myself), and it’s fun to skim through and realize many words were in existence then that you wouldn’t have thought.

And just this week comes news that the Oxford English Dictionary has added new words to its definitive tome: he words “OMG,” “LOL” and “FYI,” as well as ♥, as in “I ♥ NYC.”

The last one is just nuts! It’s the first time a symbol has been defined as a word. But certainly it has been around for much longer than its acknowledgment within the OED, and one can surmise that certain words and phrases were around a lot longer in Regency times than documentation allows for.

What words jar you from a story? What words surprised you by being extant at the time? What word do you think the OED should add next–or never allow within its pages?

I try to be so careful with this, yet I still screw up. I used “memory bank” in my debut book…well, there were banks and memories in 1820, weren’t there? But I’m always amazed when modern-sounding words (like shag) prove to be old.

I remember being sort of shocked when Dorothy Dunnett used the word “mesmerized” in one of her Lymond novels (which were set in the early 16th century!) She was usually quite meticulous about that kind of thing, but that slipped through!

Regina, I always have to stop myself from using “mesmerized.”

When I see them, I’m immediately pulled out.

It is so easy to check on word usage these days. Just go to http://www.etymonline.com/

This is actually the topic of the author’s note in my second book, LOL! I have a whole list of favortie words I’m not allowed to use (like lummox, miffed, frazled, hello, sorry, tweak, thug, snob). But I’ll admit upfront that I willfully misuse mount (1856 as a synonym for horse rather than the action of mounting).

The word that sticks out like a sore thumb for me is ‘sibling’. I was always a voracious reader but never met this word until about twenty years ago as an ‘americanism’, used in magazines. Now it appears in Regency tales written on both sides of the Atlantic.
On the other hand, my editor has reproved me for using terms too archaic for a modern readership. I do get carried away…

I had to stop reading one book about Scottish highlanders when the men’s kilts were mentioned too many times. It was set at least a century before kilts were worn, and it not only took me out of the story, it eventually slapped me up the side of my head.

I came darn close to including “defeatist” in my April release, but in the final round of edits something bugged me about it, so I looked it up on OED online and discovered it was indeed an anachronism.

Isobel, now that I look at it, my cover copy includes “snob.” But A) I don’t write the cover copy, and B) anachronisms don’t bother me so much there because it’s not supposed to be fully in the author/story voice.

@Maggie Robinson — I think words that relate to sex and being drunk are probably among the oldest words still in use, which must say something about human nature.

@ Isobel — Is thug not allowed? I thought that came over from India or one of the other British colonies fairly early.

The word that pulls me out of a story because it sounds like something a middle manager (which is exactly what I am) would write in a memo: finalize. It most definitely does not sound like something a Georgian or Regency character would say. I once put a historical romance back on the shelf in the bookstore when someone asked the heroine if she’d finalized the sale of her land.

Wow, I just added Captain Francis Grose’s 1811 Dictionary of the Vulgar Tongue to my “need” list. What a resource that sounds like!

And to a heart being added to the OED? I say, that’s ridiculous!

So many words, great words that can’t be used… I always had trouble with okay because I thought in terms of astronauts and A-OK, and then I looked up okay, and discovered there was a document using it in 1790. I’m more likely to be pulled from a historical novel by a hero or heroine with 20th century ideas. Like the heroine who decides she’s going to London to become a bookstore owner. :-/

I want froust added to the dictionary, that lazing in bed right after waking but before actually crawling out of bed.

There are any number of words added to the OED every year which have no place on those pages. The line between English and slang is blurred more and more each day. Yes, I am a language snob. I’ve studied so many of them and the etymology of the words therein, that the use of slang or symbols seems a step back to me.

I do have Grose’s dictionary and I use etymonline daily.

And can I just say CONGRATULATIONS LAUREL MC KEE for her Rita Nomination for Countess of Scandal !!

OMG Laurel was nominated for a RITA? I bask in the reflected glory …

How about chipmunks in the grounds of a medieval monastery.

Judy, please give us your source for ok! In the US, right?

Trouble with Grose’s dictionary is that you don’t know who knew what when. Be cautious.

All too true, Janet. I always check etymonline just in case!

I just love language so much, hearing you guys obsess as much as I do is delicious! Sorry I was away all day–I went to that Lawrence exhibit Diane blogged about today (with RITA-nommed Cara Elliot, Myretta Robens, Loretta Chase and Sandy, whose last name escapes me at the moment). It was as incredible as Diane said.

I don’t think that one should be able to use “it’s fiction” as a cop out not to do the research, or worse, shoe-horn anachronisms into a book just because that fact is interesting. I read a book recently where the author made a big deal of the penny black which didn’t comeinto use for another 3 months. one day, one year, one decade out, I don’t see it makes any difference.

My favourite site of this ilk is

“You Can’t Say That!” which shows many anachronisms that people make in historical books, like biscuit coloured breeches etc–but also shows some surprisingly accurate ones which one would think were modern like barbecue and chubby.

Janet, you’re right that it’s originally American. When I first looked it up, last year, I found a site stating it was a corruption of a French term. I wish I’d bookmarked it, or at least knew where to look again. Now, all I can find is that it was in a letter from a Tennessee lawyer, in 1790. In my search I found the wikipedia entry to be interesting. I don’t use it in my own writing, but I no longer worry about it in someone else’s.

So the abbreviations texters think are uniquely theirs aren’t.

What I hate is not getting to use words that ARE period, but that have changed meaning since then. E.G. I adore gaudy (colorful and ornate), but my editor hates it because to her (and probably most readers) it means tacky.

Sometimes I will let an anachronism slip by because you simply can’t expect authors to research every word, but include too many and the book goes into the recycling bin.

If the anachronism is really glaring – like calling a red-head “carrot-top” in a historical novel taking place before orange carrots existed – I get annoyed, and it mars my enjoyment of the book. I did solider on through that particular book, but I have been known to stop reading books when an anachronism offended me too much.

However, factual errors annoy me much more than anachronistic word usage.