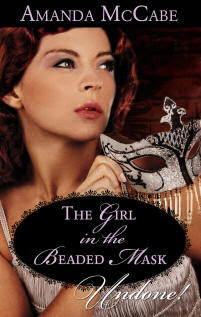 “There was music from my neighbor’s house through the summer nights. In his blue gardens men and girls came and went like moths among the whisperings and the champagne and the stars” –The Great Gatsby

Happy Tuesday, everyone! I am on my way back from the Vampire Diaries convention as we speak, exhausted but happy–watch for posts in the very near future about all my adventures in Mystic Falls. But today I’m talking about my April release from Harlequin Historical Undone, a 1920s short story called The Girl in the Beaded Mask, which I am sooooo excited about!

Ever since I read my first F. Scott Fitzgerald story in school (A Diamond As Big As The Ritz) I’ve been in love with this era. I love the gorgeous clothes, the music, the fancy cars, the cocktails, the sense of wild new freedom. But the 1920s were also so much more than that, a period of extreme and swift change after the horrors of World War I (which wiped out almost a whole generation of young men, and changed the way society worked in Europe forever). There is so much scope for drama and beauty in a story, not to mention beaded gowns and t-strap high heels. So I was practically jumping up and down when Harlequin gave me the go-ahead to write Lulu and David’s story. 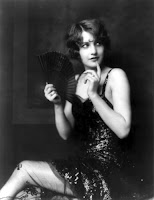 Another thing I love is a good friends-to-lovers story, which Girl sort of is. Lady Louisa “Lulu” Hatton has been in love with David Carlisle for as long as she can remember. He was friends with her older brother and often visited the Hatton home, and he always loaned her books, took her swimming–and then danced all night with other girls. Until the war. Her brother was killed and David horribly injured. He’s turned into a recluse, never leaving his country manor, but she’s heard he will attend the infamous Granley masquerade ball, a wild, debauched spectacle beloved by all the “Bright Young Things.” So of course Lulu devises a way to sneak off to the party and find him, make him see how much she loves him, how much he has to live for–from behind her beaded mask.

Since I switch up time periods in my writing, I always try to immerse myself in whatever the setting of the next WIP will be, even for a short story like this one. Reading books of the era (non-fiction, primary stuff like diaries, even novels), watching movies set in the era and digging around on-line for images gets me in the right mood for Elizabethan, Regency, Georgian, whatever, and I had so much fun with the 1920s. (Did you know there was a version of Gatsby with Toby Stephens aka Mr. Rochester as Gatsby?? And Baz Luhrman is making a new version with Leonardo DeCaprio and Carey Mulligan…). Here are a few of the books I found really useful, if you’d like to look into the era more closely yourself:

Ronald L. Davis, ed: The Social and Cultural Life of the 1920s
Stuart A. Kallen, ed: The Roaring Twenties
Nathan Miller: New World Coming: The 1920s and the Making of Modern America
DJ Taylor: Bright Young People
Humphrey Carpenter: The Brideshead Generation
Mary S. Lovell: The Sisters: The Saga of the Mitford Family (a bit later than the 1920s, but very useful for seeing how a certain segment of English society lived in the period; also lots of fun!)

And I will be giving away a free download to one commenter on today’s post! What do you like best about the 1920s? What would you wear to a “Gatsby” party???

Lots of beading! I’d love to wear a heavily beaded dress and see the fringes swing as I charlestoned.

I can’t wait to get my hands on your Undone–I love that you hop time periods and never fail to write an amazing romance!

I love that you included a Gatsby quotation. My favorite part of Fitzgerald is the way he uses color to describe things you don’t think should be colorful….okay I know a garden is colorful, but how often is it blue? It just creates this amazing picture.

I saw The Great Gatsby as a ballet and adored it. It was one of the best ballets I had ever seen. I wish it would play again.

The Diamond As Big As The Ritz was also my first Fitzgerald although I didn’t read it for school. I read it for fun.

Wat I like most about the 1920s have to be the clothes…have you seen Thoroughly Modern Millie? It’s worth it for the clothes….the costume designer did some great things. I’ve always wanted a flapper dress. Haven’t found one I like yet, but one day I will and I will go to West Egg and have my own party in a blue garden.

PS In my collection of 60 vintage hats I have some great flapper hats. One is dark brown with a lilac bow.

Such great things everyone!! I am also crazy about the 1920s fashions–they are beautiful, and also very flattering (and the shoes and hats are great too!)

The imagery in Fitzgerald’s stories is always amazingly beautiful. I wonder if that’s why film adaptations of them don’t always work out very well? they are very not plot-oriented, it’s all about the atmosphere. Hmmm.

But I was so excited to give this period a try…

I have the Kindle version on pre-order, Amanda!!

I once wore a full length fringed vintage dress to a 1920s party. An authentic dress!!! It was probably my favorite dress of all time. Alas, I merely rented it. I should have purchased it. I still have the shoes, though.

And I distinctly remember reading Zelda, the biography of Fitzgerald’s wife while on my honeymoon!!!

This season the Washington Ballet did a full-length Gatsby. I know movie adaptations haven’t worked so well for this novel, but the ballet was lovely (even if it didn’t have all the marvelous Fitzgerald language).

Did anyone else hear the story this month that the mansion Fitzgerald used as model for Daisy and Tom’s house would be demolished if not purchased? The asking price was in the multimillions, and the monthly upkeep was around $45,000. Far too rich for me, but I do hope someone bought it and saved it from the wrecking ball.

As for the 1920’s, part of what I love is that it was such a period of social and artistic ferment. Think of music such as jazz, expanding roles for women (although sadly one cause was the loss of so many men in the war), the Harlem Renaissance, modernism in painting and literature. All in all, a fascinating period.

I can’t wait to download this book Amanda. The 1920’s have always been my favorite period of the 20the century for some of the reasons Evangeline mentions along with Prohibition, the rise of the mob, Gershwin, the murder of William Desmond Taylor, Fatty Arbuckle, Clara Bow, the Ballets Russe, F. Scott Fitzgerald (and Zelda), Hemingway, Paris, Art Deco, Tamara de Lempicka. I could go on and not to mention the Charleston, the Fox Trot and the Quickstep.

I have no idea what I would wear because beads are not my friend. I would look hilarious.

As for what I like about the 20’s it would have to be the fashions.

I have no idea what I would wear because beads are not my friend. I would look hilarious.

As for what I like about the 20’s it would have to be the fashions.

Love the cover of your book — and the setting — one of my favorites! I love almost everything about the 1920s for the reasons you mentioned — there’s a piece in Journalistas by Zelda Fitzgerald, from…1925, I think?, bemoaning how the flapper has been co-opted by the general masses, thus taking away the flapper’s dangerous oomph. It was so eye-opening to see how cutting edge the flapper was and what it meant when a woman declared herself a ‘flapper’.

Good luck with the release — it’ll definitely be on my TBR!

Can hardly wait to read your book and see how you experienced the 1920’s.

As for me, my grandmother was in her teens and early 20’s in the 1920’s, and I’ve always had a kind of fascination with that time. There’s a certain innocence, and yet still a seductive side. The black and white movies give it even more mystery. I love the clothes, the hats, gloves and bags, strong, feminine women, and dashing, dangerous men….well in my head anyway!

As to the fashions, I think they’re gorgeous but am afraid they would not be flattering on me, other than in fantasy. 🙂

When I was a punk rocker in my wasted youth I wore a vintage lace flapper dress with army boots. Of course it got destroyed while dancing all night in clubs. Perhaps it was the dress’s second life in nightclubs.

My favorite thing about the Twenties is the beauty and gaiety layered over sadness and ennui. Oh, and George Gershwin!

Looking forward to this book!

I have to admit I know very little about the 20’s beyond a vague impression of glamor and inter-war, pre-Depression decadence. I love the look of the clothes, but I don’t even remotely have the body for them.

Your short story sounds exciting. A masquerade is always fun! The ’20’s have a feel of freedom about them. There were still a lot of social restrictions but it doesn’t feel that way. I love the work the suffragettes did to get women the right to vote. I would have been right there with them, in my flapper dress and beads of course!

I grew up with older relatives who had lived through the 1920s in NYC, as children, so their impressions and family photos have always given this era a certain mystique that I think is beautifully suited to romance.

A recent issue of one of the Somerset Studio mixed media art magazines had an article on a piece called “Gatsby’s Ghosts” where the artist gave ghostly effects to some period illustrations, and described their idea of a party attended by the ghosts of that era, struck me so hard that I didn’t want to put down the magazine -and my next stop was the romance section, so this says something. The art and the idea had an arresting beauty to them that I think would translate wonderfully to a romance.

Squeeing and flailing over Baz Luhrumann doing Gatsby. I shall prepare to be dazzled.

Can I hug you for hopping around different time periods? Seriously, I love when authors do that and that’s what I prefer myself.

LOL, thanks so much, Anna! Jumping around to different time periods is the only way i can really write fast without burning out. It keeps my interest fresh. 🙂