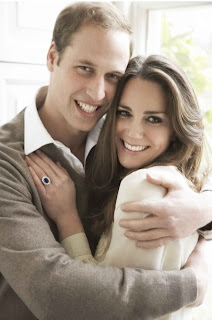 Are you anticipating the wedding of Prince William and Kate Middleton? I am. I think they are such an appealing couple; I’m really hoping they achieve a happily ever after.

Here is what Senior Editor Linda Fildew said about them:

“These seven short stories brilliantly capture the drama, pomp and ceremony and high passion of real-life royal weddings. From Eleanor of Aquitaine to Queen Victoria, these royal romances through the ages bring history vividly to life.”

As you might imagine, the authors had only a short time to research and write these stories. It was up to each of them to decide to use the royal couple as the hero and heroine or to choose other characters.

Here are the stories and the royal couples the story celebrates:

Terri Brisbin’s WHAT THE DUCHESS WANTS (Eleanor, Duchess of Aquitaine and Henry of Anjou, the future Henry II, 1152)

–As one of Europe’s most powerful women, Eleanor, Duchess of Aquitaine, has a chance most can only dream of—to choose her own husband! One glance at the young, forceful Henry of Anjou and her choice is made. Able to match her wit for wit, Henry’s a true warrior and not afraid to disobey a royal command… But his love of life—and the bedroom—promises Eleanor a brand-new world of excitement!

–Princess Berengaria’s lady-in-waiting, Adriana, takes her duty to the future Queen of England seriously—she will defend her to the death! When their sea voyage to the Holy Land ends up in shipwreck and capture Adriana knows her only hope lies with the mysterious Irishman, Liam MacEgan. Liam escapes to reach Richard the Lionheart and together they plan a rescue mission. Nothing will stop these warriors from succeeding—their future brides are captive on Cyprus and they’ll raise hell to claim them!

–He might be the future King of England, but Prince George seeks a marriage that’s more than a mere political alliance. Masquerading as a lowly nobleman, George heads to the court of Ansbach to woo the renowned beauty, Caroline! Caroline has no knowledge that he’s the most sought-after bachelor in Europe. But however much she’s charmed by the mysterious gentleman, her duty is to accept a blue-blooded proposal… Still, she cannot deny she’s wickedly tempted by his red-hot proposition!

–George, Prince of Wales, with his mistress in tow, only lays eyes on Princess Caroline of Brunswick three days before their wedding, and his resentment is palpable. Christopher, Duke of Severn, knows all about arranged marriages—his new wife’s fortune is the reason plain Linnet is wearing his ring! Severn and Linnet must persuade the spoilt princeling and his soon-to-be bride that a paper marriage can become something more. But in trying to convince the royal couple, a tantalizing spark ignites between the duke and his convenient duchess…

–As Princess Charlotte prepares to marry Prince Leopold, her most trusted lady, Isabelle Fenwick, must remain chaste and beyond scandal. Yet she has never forgotten darkly handsome Count Nikkolae Grazinsky and the kiss he stole…She later discovered the Russian had only used her for a wager, so why does he still seek her company? And why does the air tingle with anticipation when they are together? Surely this rake cannot be thinking of following Prince Leopold’s example and making a love-match?

–Preparations for the young Queen Victoria’s wedding have thrown all of London into a frenzy—but for Lady Emily Sumner, her own marital dilemmas eclipse all the excitement! Forbidden to marry her beloved Lieutenant Richard Lawrence by her strict, status-conscious mama, Emily’s chance at wedded bliss seems out of reach… But as Maid of Honour to the Queen, Emily discovers she has a secret weapon—royal approval! And with Queen Victoria’s blessing, surely Emily’s happy ending can’t be too far behind…?

Lucy Ashford’s THE PROBLEM WITH JOSEPHINE (Emperor Napoleon and Archduchess Marie-Louise of Austria, 1810)

–It’s springtime in Paris and Emperor Napoleon is about to marry Archduchess Marie-Louise of Austria. All around the city Napoleon’s courtiers are preparing for the spectacularly lavish wedding. Everything must be just right…Ordered to remove all portraits of Josephine, the Emperor’s first wife, seamstress Sophie has to track down a talented artist called Jacques. He promises to carry out the commission, but only in return for a kiss for every hour he works…

The stories are specially priced at $1.99 each, discounted to $1.79 at eHarlequin.
This should be the perfect way to prepare for “our” Royal Wedding!
What’s your favorite royal wedding? Will you be watching the wedding on April 29? How else are people celebrating the wedding?
Posted in Uncategorized | Tagged Royal weddings | 14 Replies
0 0 votes
Article Rating
Subscribe
Login

I probably won’t watch the royal wedding, but I certainly wish them well. It must be SO difficult to be in the spotlight all the time.

Our family has already got a 3 am party arranged so we can sit together to watch all the pomp and circumstance on tv.
I haven’t missed a royal wedding yet!

They seem like a sensible couple, hopefully that will help them work though the ups and downs of marriage.

I do wish them their happily ever after.

Everyone, please notice that Ann, who commented above, is one of the Royal Weddings authors!!!

Thanks for featuring the Royal Stories, Diane! I was excited to do Richard the Lionheart’s story. When I researched their wedding story, it had such a perfect plot, you couldn’t make this stuff up–a shipwreck, a kidnapped bride, and storming the island of Cyprus? Such fun!

I remember getting up early to watch Sarah Ferguson and Prince Andrew get married. So many of the royal marriages didn’t turn out well, sadly.

My parent let us kids watch the Prince Charles/Lady Di wedding which I don’t recall very well since it was sooo early. I just remember having the Lady Di haircut a lot as a kid. I’m not sure if I want to watch this one.

Sheree, I just happened to be home from work when Charles and Di married. I thought I was so lucky to be able to see it, even though I never liked her dress. I really want to see this one, too.

Michelle, thanks so much for stopping by!!!

These stories look like such fun although a few of them I question a bit….I’m not sure the Prinny story is really going to make me go gaga for royal weddings. But maybe it’s just me. I never was a Prinny fan.

I don’t know if I will watch the royal wedding or not. I will openly admit to wanting to watch the Lifetime movie William and Kate, but I’m just a sucker for lame Lifetime movies….what can I say? I like to get away sometimes and forget about my life and Lifetime helps me do that.

I know what you mean about the Prinny story, Rachel! Regency royal weddings are a bit tough to work with, since Prinny’s was such a farce, and though Charlotte and Leopold were happy while they lasted, knowing her fate makes hers a tragedy.

Rachel, LOL! Prinny is not one of my favourite characters either. I picked on his wedding because I figured it was a textbook case of how NOT to conduct your marriage, arranged or otherwise. Naturally my hero and heroine do a great deal with their marriage. I had a lot of fun with this one, especially what Susanna refers to as the farcical elements.

I hope they’ll be out in print! I’m not a fan of Prinny, but love Elizabeth’s books!

I was in London for Fergi and Andrews. Too young to recognize the significance. I stayed home and watched in on the tellie, while my friends went to watch. They lamented that I saw more than they did.

I don’t know enough about royal weddings to have a favorite. I don’t even know what I was doing when Charles and Diana were wed. I agree with you, Diane, about her dress. Just too overdone with the ruffles on the bodice. I think this wedding will be more elegant with not as much pomp. They seem to be stronger individuals than his parents, much more likely to stand up for what they want. I wish them both the best. I think they have a better chance than most to have their marriage be a success. We’ll have to wait and see.

I definitely want to see what she’s wearing, but it ends right there.

LOL! You know I will be watching. I have a party planned with some friends, with champagne and cake. Can’t wait to see the dress. 🙂

Oh I am so looking forward to reading these stories by some of my favorite authors! What a great idea!

I did sit up and watch Charles and Di’s wedding. I won’t be able to watch William and Kate’s but my Mom is recording it for me.

We will be doing some Royal Wedding party cakes at the bakery for those people who are going all out to watch the wedding!