Inspiration–Where Do You Find It? 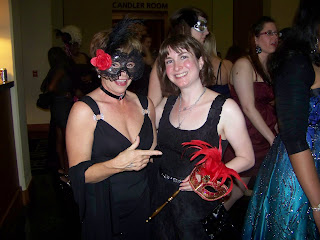 So it’s been a busy couple of weeks here, so please forgive the short post today! I got back from the Vampire Diaries convention in Atlanta (see me at the masquerade ball here! And you can read about my adventures there on my new Heroes & Heartbreakers post), barely recovered from that craziness, finished one book and dove into another. (Also, FYI, Girl in the Beaded Mask is now available at eharlequin and Amazon!)

Since I got back from Atlanta and dove back into writing work, I’ve been thinking a lot about inspiration. I know I’ve blogged about it here before, but this seems to be the number one question I get when people first find out I’m a writer–“Where do you get your ideas?” I always mutter something like “Well, er, everywhere, I guess,” but it’s the truth. I find ideas for settings and plots in historical non-fiction, movies, songs, paintings. I can find character inspiration in the same places, and also just from watching and listening to people. I love people-watching. 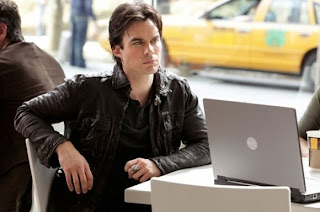 And I was very inspired indeed by the Vampire Diaries convention. I always like to come up with hero and heroine models when I start a new WIP, just to get their image in my mind and figure out what sort of people they are. Contrary to what some of my friends think, my heroes are not always Ian Somerhalder, or as my brother calls him “your vampire boyfriend.” (For my just-finished book it was Henry Cavill from The Tudors; for the just-started book it’s Daniel Gillies from Vampire Diaries–I’m not even faithful within one show, sadly). I admit though, often the hero in my mind does look an awful lot like Ian Somerhalder, and I think this weekend just added fuel to that inspiration. (And if you really want to be inspired, check him out in an HBO show from a few years ago, Tell Me You Love Me…) 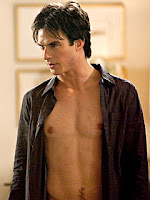 But this does bring up a dilemma in my mind. I’m a huge fan of the “brainy, bookish heroine gets hottie hero everyone wants” storyline–it may be my favorite romantic plot. But how does said brainy heroine even manage to talk to said hottie hero without collapsing into giggles? (I confess, I had my photo taken with Ian S. at the convention, and almost fainted when he just put his arm around my waist and smiled at me. What would I have done if I was a Regency deb at Almacks and had to waltz with him?? Yum, Ian Somerhalder in Regency garb…). How does said hero walk down the street without being mobbed all the time? The hero and heroine would have to hide out just to get two words together, let alone the chance to make out. It’s all something I never really considered while writing a hero before.

So, now it’s your turn. Where do you get inspiration? Who would make you faint if you met them in real life? (Megan and Clive Owen? Carolyn and Alexander Skarsgard? Diane and Gerard Butler?). What have you been watching/reading lately?

It’s true. Mr. Skarsgard does inspire me. These days I am also inspired by Upen Patel, My Other One True Love.

If I actually met A.S. I would probably say something boring like, “a pleasure to meet you, Mr. Skarsgard. I enjoy your work.” And then I would pass out.

I will not comment on your decision to attend the Vampire Diaries convention. How can I? I once attended a Gerard Butler convention, even knowing he would not be there! Yours sounded like more fun!

Alas, this is a part of our popular culture that is passing me by. No vampires for me….I even got bored with True Blood.

But I do watch every episode of Say Yes To The Dress.

I would probably be tongue tied if I had the opportunity to meet Gerard Butler (or almost any celebrity )!!! I doubt I would faint, though. I’m made of sterner stuff than that!!

Your Other True Love is yummy, Carolyn! And yes, panic (as in “How did this deadline get here so fast??”) is a huge motivator…

And LOL Diane! I wouldn’t have gone if the actors weren’t there, though it would have been fun even if they weren’t. I met so many interesting people and saw some hilarious stuff. 🙂

“Say Yes to the Dress” is one of my favorite guilty pleasures, though I always end up yelling at the people to please, please, please buy a dress that doesn’t look just like everyone else’s!!

Oh, and I did manage to not actually faint, I even was able to say something semi-coherent. But I didn’t believe real human beings could actually have eyes that blue…

I think that I actually know one of the people working on The Vampire Diaries. She is a friend of my sister’s and used to hang out at my house. She has told us some interesting stories about shooting and such.

My current heart-throb of the moment is Tobias Menzies….for those of you not familiar with him, he played Brutus in the HBO series ROME. He also has a Regency link since he was William Elliot in the Sally Hawkins version of Persuasion. So lucky for me, I’ve actually been able to see my hero in Regency garb and not just imagine it. He has a new DVD coming out in May where he sings and plays the guitar….. I like to think if I met Tobias I would sweep him off his feet with my intellect and fine eyes. But how am I to know? My face would probably be bright red from blushing so much.

Since starting my novel I have taken some tips that I have learned on Riskies and did mentally cast my characters with actors and it’s amazing how much they have come to life. Dylan is my character I have cast as Tobias Menzies and it’s amazing how three dimensional he has become. He was actually a villain at first, but I have come to learn that he is not a villain. He is just dark and brooding and a bit misunderstood. I must have some Bronte blood in me. He has even worked his way into his own story which I will write when I finish his brother’s.

As for inspiration I get them from everywhere, but I take a few from my own life as well. I have had some very interesting adventures and little pieces of them are making their way into my stories. I guess I better keep living an adventurous life if I want to keep writing.

PS Riskies: have you seen this?
http://napoleon-fashion.com/wordpress/

I hope it comes to the US.

Amanda you look fit and gorgeous! The swooning may have been mutual.

I still have my same old Alan Rickman crush. If I ever met him I’m sure the scene would greatly resemble Mrs. Weasley and Gilderoy Lockhart.

As for what I’m watching, I started Being Human, the British version, because I’m waiting for Dr. Who new season 2. Being Human is okay but I must be a bit bored because I’ve had the disc for two weeks.

I sound like a terrible anglophile, but I’m not. Really.

I’m not sure I’d want to meet anyone who inspires me. I might be disappointed. Or make a fool of myself. Or both. 🙂

As for inspiration, ideas are everywhere. Some people think that’s the hard part. Not for me!

Rachel, I would LOVE to hear the backstage dirt on “Vampire Diaries”! 🙂 And I actually ordered the catalog for that exhibit not too long ago–it looks totally gorgeous, and I hope it comes a bit closer soon.

Jane George–I think you are my new BFF. 🙂 I’ve been going to yoga 5 times a week, hopefully it is paying off, LOL. And Elena, I was afraid I might be disappointed as well, but was amazed to find out they actually look pretty much exactly like on the show. So now I am even more desperately in Damon love…

“As for inspiration, ideas are everywhere. Some people think that’s the hard part. Not for me!”

Me either!! It’s finding time for all the ideas that’s the problem…