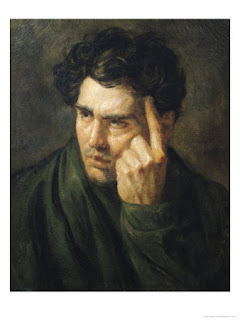 Lord Byron, 1788 to 1824. The man died 187 years ago. If I go to Google and search on Bryon, just the man’s title, nearly all the hits are about him. Here’s a link: search for Byron Note, if you will, that ALL the images that show up on this search result are, in fact, of Lord Byron. If you click on the images link, you’ll see that Lord Byron is STILL the predominant Byron image with some posers in there. (Who do they think they are?)

That’s a powerful name. For us in the English speaking world that’s something.

Since April is National Poetry Month, here’s a little Bryon, first the familiar, then something perhaps a little less familiar.

She walks in beauty, like the night
Of cloudless climes and starry skies;
And all that’s best of dark and bright
Meet in her aspect and her eyes;
Thus mellowed to that tender light
Which heaven to gaudy day denies.
One shade the more, one ray the less,
Had half impaired the nameless grace
Which waves in every raven tress,
Or softly lightens o’er her face;
Where thoughts serenely sweet express,
How pure, how dear their dwelling-place.
And on that cheek, and o’er that brow,
So soft, so calm, yet eloquent,
The smiles that win, the tints that glow,
But tell of days in goodness spent,
A mind at peace with all below,
A heart whose love is innocent!

The Destruction of Sennacherib

Lord Byron
The Assyrian came down like the wolf on the fold,
And his cohorts were gleaming in purple and gold;
And the sheen of their spears was like stars on the sea,
When the blue wave rolls nightly on deep Galilee.
Like the leaves of the forest when Summer is green,
That host with their banners at sunset were seen:
Like the leaves of the forest when Autumn hath blown,
That host on the morrow lay withered and strown.
For the Angel of Death spread his wings on the blast,
And breathed in the face of the foe as he passed;
And the eyes of the sleepers waxed deadly and chill,
And their hearts but once heaved, and for ever grew still!
And there lay the steed with his nostril all wide,
But through it there rolled not the breath of his pride;
And the foam of his gasping lay white on the turf,
And cold as the spray of the rock-beating surf.
And there lay the rider distorted and pale,
With the dew on his brow, and the rust on his mail:
And the tents were all silent, the banners alone,
The lances unlifted, the trumpet unblown.
And the widows of Ashur are loud in their wail,
And the idols are broke in the temple of Baal;
And the might of the Gentile, unsmote by the sword,
Hath melted like snow in the glance of the Lord!

Sometimes it feels as if Byron is the only poet of the Regency, his legacy and wicked personal history looms so large. But of course there was that Wordsworth fellow who wrote a poem or two, and his sister Dorothy. Not to mention Keats and Shelly. But what about this one?

Elizabeth Hands
Ye tender young virgins attend to my lay,
My heart is divided in twain;
My Collin is beautiful, witty, and gay,
And Damon’s a kind-hearted swain.
Whenever my lovely young Collin I meet,
What pleasures arise in my breast;
The dear gentle swain looks so charming and sweet,
I fancy I love him the best.
But when my dear Damon does to me complain,
So tender, so loving and kind,
My bosom is softened to hear the fond swain,
And Collin slips out of my mind.
Whenever my Damon repeats his soft tale,
My heart overflows with delight;
But when my dear Collin appears in the vale,
I languish away at the sight.
’Tis Collin alone shall possess my fond heart,
Now Damon for ever adieu;
But can I? — I cannot from Damon thus part!
He’s loved me so long, and so true.
My heart to my Damon I’ll instantly bind,
And on him will fix all my care;
But, O should I be to my Collin unkind,
He surely will die with despair.
How happy, how happy with Damon I’d been,
If Collin I never had knew;
As happy with Collin, if I’d never seen
My Damon, so tender and true.

I particularly like this last poem because it works so well to explode the very prevalent notion we seem to have that women of the period were dis-passionate creatures who would NEVER have two lovers and be unable to so delightfully decide between them. And hint, all the while, of passion.

I’ve never seen that portrait of Byron before. Do you know who painted it?

Byron’s poetry is wonderful – we studied ‘the Assyrian’ at school [anapestic rhythm]. Is that portrait really “our” Lord Byron, it could be a descendant?
What a glorious flirt the young lady is – there’s a novel in there. And I have a novel coming out in July where the heroine is an ardent Byron fan, determined to roam the world in search of adventure…

Thank you for this lovely post. I read your blog on Google Reader, and since I can’t post there, at the time of reading it, I seldom comment, but this was special. And, I’m not a big poetry fan except for children’s poetry which I read with my children over 40 years ago. Anyway, thanks for reawakening an appreciation of poetry.

I’m so glad you guys enjoyed the post. I don’t pick up poetry often enough and every time I do, I ask myself why I don’t. ::shaking my head at myself::

@Linda: One of my fav children’s poems is The Doom Merchant — I’ll have to look up the book and author when I’m home. It’s really funny.

Carolyn,
Back in the early 60s I bought a beautiful book for my children entitled Everyday Poems Every Young Child Should Know. It has beautiful illustrations, and darling poems. My favorite being Wynken, Blynken and Nod. It is out of print, but I’ve managed to locate copies for the grandchildren. A wonderful book!
Linda

Everyone knows I am a huge fan of Byron’s work. Wonderful selections, especially the last Byron poem you posted AND the final poem was lovely. I’ve never read any of her work.

Thanks for the poems. I used to read poetry all the time and really do enjoy it. For some reason, I haven’t picked up any of my poetry books to read in ages. Will have to rectify that in honor of National Poetry Month.
My favorite poem is actually a children’s poem, HALF WAY DOWN by A. A. Milne.

Lord Byron is even a character when he doesn’t appear. Part of the action in Tom Stoppard’s “Arcadia” (my favorite 20th C play) concerns contemporary characters trying to figure out what Byron did on his visit to an English country estate 200 years before.

As to the choice between Damon and Collin, I’m currently reading Jude Morgan’s “An Accomplished Woman”, and one of the secondary characters has exactly the same problem choosing between Mr. A and Mr. B (as her friend/companion calls them).

Oh good lord, I never responded to any of these lovely comments! Thanks and I’m glad you enjoyed the poems.

Diane: I don’t know who painted that portrait of Byron, but after I turn in the book, I can probably find out.

Some of my favorite poems are childen’s poems, too.