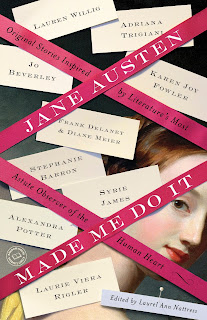 It’s always fun to share a cover, and here’s a very lovely one–a short story anthology of stories inspired by Jane Austen, edited by Laurel Ann Nattress and to be released in October, 2011. Jane Austen Made Me Do It can be preordered now!

A whole bunch of us are participating–you may recognize some of those names on the cover–and mine, Jane Austen, Yeah, Yeah, Yeah, is probably the only one about Beatlemania in the collection. It was inspired not so much by Jane Austen, although the story is, sort of, about Sense and Sensibility, but by the movie An Education.

When I saw the cover I was curious about the painting used, and Laurel Ann told me it was Portrait of the Misses Mary and Emily McEuen by Thomas Sully (June 19, 1783 – November 5, 1872). 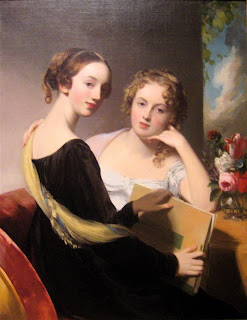 I was curious about Sully, and his name was familiar, so I thought today I’d tell you a bit about him. First, here’s the whole portrait. Sully was born in England to a family of actors who traveled to Richmond, VA, where his uncle managed a theater. His artistic talent was a family trait and his first real apprenticeship was with an elder brother and then briefly with Gilbert Stuart. 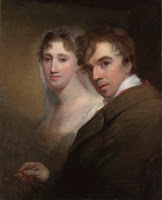 When his brother died, Thomas, at the age of twenty-one, then married his brother’s widow (his self portrait shows him painting his wife), becoming stepfather to his nieces and nephews and fathering nine more. He moved to Philadelphia, his home base, in 1806, and in 1809 made a visit to London to study with Benjamin West and Thomas Lawrence.

His own records indicate a staggering 2,631 works from 1801 onward, mostly portraits, although he also painted some landscapes and dramatic historical scenes. During his long life, his subjects included Thomas Jefferson, John Quincy Adams, Lafayette, and Decatur, but his portraits of women were most admired for their sympathy and sensuality. 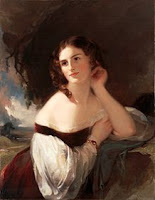 In 1837, America was in a recession and he left for London with his daughter Blanch to look for work. The day before his departure, the Society of the Sons of Saint George, a benevolent association created to support indigent English emigrants and their families, offered him a commission of a full-length portrait of Queen Victoria. Because of his connection with Lawrence and his portraits of actors including Fanny Kemble Butler, he was fairly well known in London, but the Queen kept him waiting … and waiting. He kept a journal of his experiences:

The rain has been incessant until the present time. The confined space allowed for a house in the streets of London obliges the use of water-closets and as they often get out of order, the inconvenience is great. The water pipes leading to ours have become frozen, and for the present it is abandoned – luckily there is a subterranean place, for the servants, to reach which a lighted candle is required to wind your way through dark and dismal passages… The Queen’s physician has disapproved of her sitting for more portraits at the present time. I wish I were relieved from the uncertainty of her sitting to me! I am quite tired of suspense on the subject. 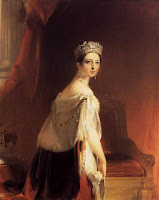 Finally he was allowed to paint her, and his portrait is a distinct break with tradition–the young queen looks back over her shoulder as she approached the throne.

Victoria was too busy to allow Sully all the sittings he requested, but graciously allowed his daughter into the palace to sit in her place “as a mannequin”. So it was that Blanch Sully became the first and last American citizen ever to wear the British crown. These unusual circumstances can only have intensified the painter’s compassionate and paternal view of the teenage queen, suddenly burdened with an extraordinary responsibility, placed almost overnight at the head of the greatest empire in the world. In his diary he wrote approvingly of her ability “to throw aside constraint and laugh and talk freely like a happy innocent girl, of eighteen – Long may she feel so light of heart!” But his knowledge that such a thing was, of course, impossible is what gives his portrait its poignancy. Andrew Graham Dixon

Sully’s descendants include writers, an architect, and artists, including a great-great-great grandson of the same name.

Had you heard of Sully? What other painters do you admire from the Regency or federal era?

I have a postcard of the Sully portrait of Queen Victoria. I bought it because it’s such a different image than we usually have of her, younger, slimmer, and less dour. I think he probably flattered her a bit, but nonetheless it’s a great portrait.

I wonder if Sully was connected to the family who owned the Sully Plantation here in Chantilly, Virginia. The Wikipedia article only mentions the Lees, though.

Diane, I wondered that too, and I think there is a connection. Will let you know.

I’m going to go a little out of the time frame, but not too far and mention a few of my favorite artists that I have just recently found:

I simply adore this Jean Beraud “After the Misdeed” http://www.nationalgallery.org.uk/paintings/jean-beraud-after-the-misdeed
It will feature heavily in my third novel.

The self-portrait shown here is in my first novel: http://en.wikipedia.org/wiki/Marie_Bashkirtseff
Marie was an amazing artist, but the Nazis tried to destroy her work because they thought it was degenerate.

And the last one is actually Regency and plays a brief bit in my second novel (it’s an art theft themed trilogy) and this is actually Regency. I just love this picture and can’t wait to get to the Met to see it.
http://www.metmuseum.org/toah/works-of-art/17.120.204

I actually have a book called “Queen Victoria and Thomas Sully” that I picked up in the Met gift shop, it’s all about his travails while doing this portrait and is surprisingly fascinating. The WIP is Victorian, so at the moment it’s all Victorian all the time around here…

No connection with Sully Plantation. From the house, “One possibility is that Sully was named for a French estate, Chateau de Sully, in the Valley of Loire. Another could be from the Memoires of Maximilien de Bethune, Duke of Sully and France’s Minister of Finance under Henry IV. English editions of this were certainly available among Virginians.”

Rachel, what interesting pics. The light and the textures in the Beraud are amazing. Thanks for sharing!

I had not heard of Sully. His portraits are lovely. I went on line and checked out the museum sites and what they had of his. Like his style.