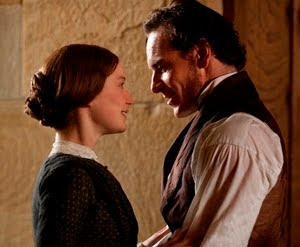 Happy Tuesday, everyone! I finally got to catch the new Jane Eyre movie this weekend, after waiting weeks for it to open here, and I am so glad I did. I enjoyed it very much–despite the fact that many aspects of the story had to be cut (as they always do for feature-length films), I thought the atmosphere and complexity of the characters was still there, as well as the dark intensity. Highly recommended! (My favorite Jane Eyre is still the old Timothy Dalton version, but this might be a close second. I’ll need to see it again to make sure…)

It was also very timely for me, since I’m deep into the first book of a new Laurel McKee series, this one set in the early Victorian era (1840s) and centering around two families who are old enemies, one a ducal family and one a family with underworld connections (and having done quite a bit of research now on the Victorian underworld, I can only say–I thought the Elizabethans were naughty, but those Victorians were nasty. Maybe it’s the whole hidden/repressed thing the Victorians had going on, where the Elizabethans had it all out there for everyone to see. The contrast is fascinating). You’ll be hearing a lot more about my research on this period later (I’ve never done a Victorian setting before, and I’m really loving being immersed in this new world), but for now let’s do what I always like to do–look at some clothes!

One reason this story ended up being set in the early Victorian period rather than the later 1860s-70s-80s was the fashion. I love the gowns of this decade (and was inspired a lot by the costumes and general aesthetics of the movie Young Victoria–my heroine, Lily, looks a lot like Emily Blunt in my mind, and she also has a great wardrobe!), before things get a little high-Victorian excessive. But I have to remember in the love scenes that there are a lot more underclothes to deal with….

So let’s look at some of the images from my Victorian Research File. I especially love that red gown–my heroine is definitely going to wear that one! 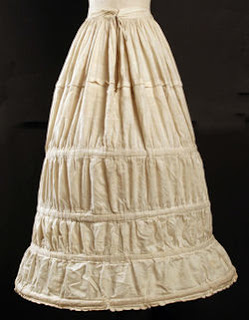 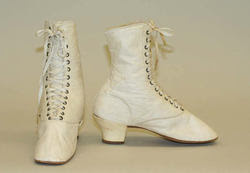 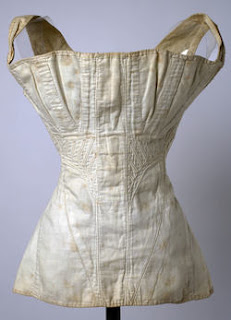 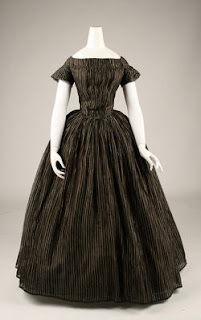 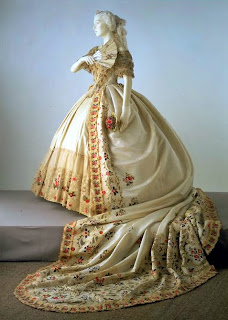 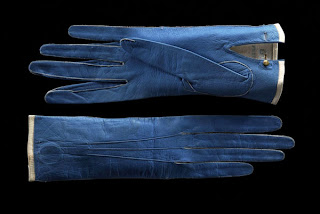 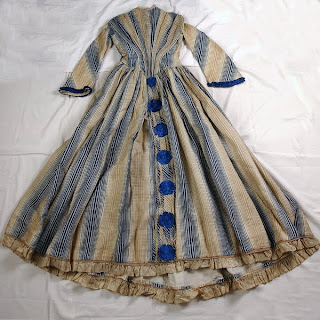 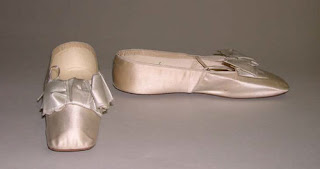 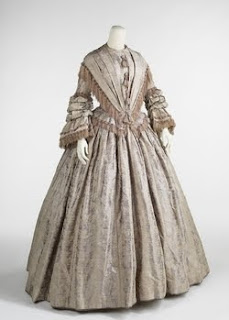 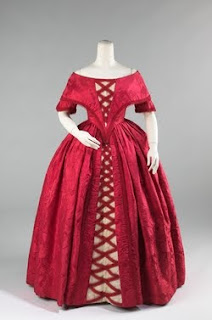 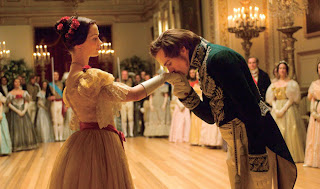 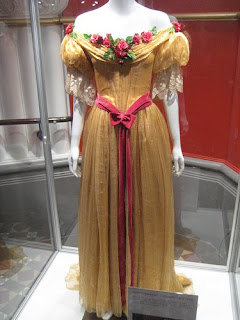 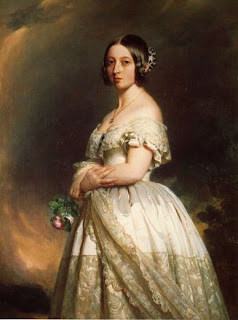 Also this week, I’m enjoying watching the new Upstairs Downstairs (though I keep getting the naughty housemaid and the naughty younger sister mixed up–why do they look so much alike?) and reading Giles Tremlett’s new bio of Catherine of Aragon, as well as working on the WIP and getting ready to go to Kansas City in a couple of weeks to see a Princess Di fashion exhibit (as well as watching the new royal wedding?). What are you doing this week? What do you think of fashion, the Victorian era, Upstairs Downstairs, or anything else in the world??

Some of the pictures in this post remind me of an informative speech I did as a freshman in college entitled “I Wonder What’s Under There”. (PS There’s a lift the flap book book of the same title http://www.amazon.com/Wonder-Whats-under-There-Lift-/dp/0788190806/ref=sr_1_1?ie=UTF8&qid=1302628037&sr=8-1)
It was about the history of women’s underwear. The lift a flap book is quite fun.

I do love the red dress.

Very jealous that you have seen the new Jane Eyre…still waiting for it to come here…I have to admit, I have never liked anything ‘Victorian’ (never understood why a woman would want to enahance her behind with those bustles – please…I know men like ‘big butts’ as the song goes, but this is kind of ridiculous) because they always seemed to be so reserved – so I will be anxiously awaiting hearing more about your research into their ‘nastier’ side…I love the boots! And the dresses! Though my favorite is the gold one with the roses and red bow at the waist. As for my week…I think I will tackle some spring cleaning, try to save my rose bushes after they were clobbered by heavy snows falling off the roof this winter…oh yes, and watch my dvds of Law and Order UK…

Rachel, I must find that pop-up book! (And LOL on the bustles. Glad my heroines won’t be ewaring THOSE yet…)

Dtchycat, that gold dress is actually the one she’s wearing in “Young Victoria”–I loved the rose trim so much. Would love to have a dress like that myself

These clothes don’t make me sigh like Regency gowns, but they are very beautiful for the time period.

Probably no Jane Eyre for me until the book is done. I did love Young Victoria, though.

WOW, Amanda! I LOVE your fashion photos! They are always fabulous! I haven’t seen the new Jane Eyre, but I definitely want to and yes, the Timothy Dalton version is my favorite.

I have to find that pop-up book! I have a thing for pop-up books. My favorite one is one I have on phobias. Very cool.

The Regency era is my one and only when it comes to writing, but I do love to read a good Victorian set romance. Looking forward to yours!

Louisa: If you love pop up books this one is a MUST:

It’s my favorite and I have a very nice one.

Oh Rachel, thank you! It looks gorgeous and I LOVE the idea. It went straight onto my wish list! My brothers always get me a present from my dogs and cats for Mother’s Day. I am telling both of my SIL’s THIS is what I want!

I really liked the new Jane Eyre. I think some versions make her seem meek and good, but this version IMHO grabbed hold of her essential nature, the girl who even as a child would question adults, teachers, authority, church teachings — anything. A real free-thinker in her own way, and stubborn as anything.

And I *loved* the countryside….

I think I still prefer Dalton as Rochester, though. 🙂 And Blanche Ingram did nothing for me.