Cara Elliott (aka Andrea Pickens, aka Andrea DaRif) is a longtime visitor to the Riskies, but today we welcome her new persona, historical mystery author Andrea Penrose! Comment for a chance to win a signed copy of Sweet Revenge, and be sure and visit Andrea’s website for more behind-the scenes info and fun contests…

Welcome (back) to the Riskies, Andrea! Tell us about your new book–and your new persona.

Sweet Revenge is my debut into historical mystery–a world I love as a reader as well as a writer. And my publisher thought a new genre needed a new name (oh, don’t ask!) so here I am, wearing my Andrea Penrose chipstraw bonnet…

I chose to set the new series in the Regency because, as we all know, it was a world experiencing change in so many facets of life–political, social, artistic, scientific, economic. Add the intrigue of the Napoleonic Wars, and what better setting is there for a mystery series? For me it presents a wonderful change to explore themes and issues that are true to the era but also resonate with modern readers: Here’s a small taste of the story:
Lady Arianna Hadley’s desire to discover her father’s murderer has brought her back to London from exile in the Caribbean. Masquerading as a male chef, she is working in one of London’s aristocratic households. But when the Prince Regent is taken ill after consuming Arianna’s special chocolate dessert, she finds herself at the center of a scandal. Because of his expertise in chocolate, the eccentric Earl of Saybrook is asked to investigate the crime. But during his first interrogation of Arianna, someone tries to assassinate both of them, and it quickly becomes clear that something very sinister is afoot within the highest circles of government. They each have very different reasons for wanting to uncover the truth, yet to have any chance of doing so they must become allies. Trust Treachery. Arianna must assume yet another identity as their search takes them from the glittering ballrooms of Mayfair to the slums of St. Giles. And their reluctant alliance is tested in more ways than one as it becomes clear that someone is looking to plunge England into chaos…

What is the inspiration behind the story?

Actually, if I told you that I’d give away the mystery! But the inspiration for my heroine–the series is tagged “A Lady Arianna Regency Mystery”–came in a roundabout way. Several years ago, for my “real” job, I interviewed the head of a gourmet French chocolate company, which was founded by Marie Antoinette’s personal physician, and was fascinated to discover someamazing tidbits about the Regency and chocolate. I worked on a story idea that never saw the light of day, but was always determined to find a way to weave that chocolate research into a book. When I started to create Arianna, her Caribbean background suddenly made an expertise in chocolate a perfect ingredient to her character.

Did you run across any interesting research tidbits you can share? 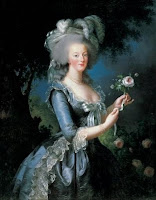 Oh, don’t get me started! There’s a lot of real history woven into the plot, based on discoveries that surprised me. Researching chocolate provided a number of “delicious” little discoveries. Marie Antoinette complained about the unpleasant taste of her medicines, so her physician came up with the idea of mixing it into a solid form of chocolate–a pistole or wafer-like disc that the queen is said to have adored. (The company, Debauve & Gallet, still offers Pistoles de Marie Antoinette. A 1.7 lb box costs the princely sum of $200. Her favorite flavor was said to be almond milk). And Napoleon commissioned a chocolate treat to commemorate his victory at the Battle of Friedland.

What are some of the challenges of switching genres?

In romance, love is at the heart of the story–it’s primarily about the two main characters, and how they overcome obstacles, bot exterior and interior, to come together. For me, the core element of mystery is the idea of justice. So the characters in the story see themselves and those around them not just through a personal prism, but through the lens of conundrum. This adds a different slant to creating personas, but I’ve really enjoyed the challenge of seeing things from a new perspective.

Since this is a romance novel blog, we have to ask–is there romance in the story??

Yes, there is! It would be pretty hard for me to write a book without having a relationship be a core element of the story, because I really enjoy exploring the interaction between people. So I felt I got to do with the best of both worlds in creating a mystery with a romance.

The hero and heroine start out as very reluctant allies, and then it becomes–complicated. They are both loners, with a lot of conflicted feelings about their past, and I enjoyed being able to thread in more ambivalence into their interaction than I might be able to do in a romance. And since the relationship will carry on for a number of books (I hope!) it allows me to wrap a lot more layers around their cores. I’m looking forward to slowly revealing who they are. (Hey, they constantly surprise me, which is part of the fun!)

What’s next for Andrea Penrose? And what about Cara Elliott?

This year is a little crazy for me, in a very good way! In february I finished off my Cara Elliott “Circle of Sin” trilogy (To Surrender to a Rogue is a RITA nominee!), and in November Cara has a new trilogy debuting. Too Wicked to Wed begins the “Lords of Midnight” which stars 3 hardbitten rogues who are tamed by love. 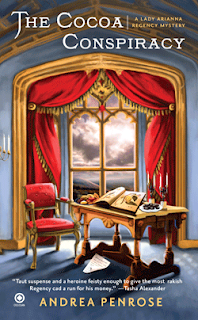 As for Andrea, The Cocoa Conspiracy, the second LadyArianna mystery, will hit the shelves in December. It’s set at the Congress of Vienna, and once again chocolate does play a small part in the plot. In my research I discovered…but that would be spoiling the fun! I hope you’ll enjoy Arianna and Saybrook’s adventures through the Regency world.

Interesting interview, and it sounds like the new series will be great. Mystery, romance, and chocolate equals wow.
thanks for the giveaway.
lcbrower40(at)gmail(dot)com

Thanks, Linda! Hope you will give Sweet revenge a nibble

Andrea!! Have you, any of you yous, ever heard of Multiple Personality Disorder? I’m worried about you. Your alters keep…um…multiplying.

Good thing that means more books from you!!! This new “personality” seems to have created a very clever book and a clever series!

Thanks, Diane! LOL on the multiple personality disorders. I’m shaking my head too some days, trying to figure out “who am I today?” But hey, it’s fun to move into a new genre, so I’m happy to have the different hats on my desk! I’m really having a ball researching and creating the mysteries. I feel that I really get to explore history, including all the fascinating little arcane details, and use it in the plots—which appeals to my inner history geek.

See! I even had to go change my “identity” to match up to the right posting (sigh) Now I am wearing the correct hat!

I really enjoyed the Circle of Sin ladies and look forward to the coming books from all your personalities!

I almost feel like I might have attended the Congress of Vienna myself since I have read quite a few books lately about it. I love it, though, since there are so many facets to explore.

So glad you enjoyed the “Sinners,” Amy Kathryn. The Congress of Vienna (which is the setting for my second book) is an amazing place for mystery, skullduggery, sexual shenanigans, etc. I’m surprised it’s not used more. (And BTW, Teresa Grant has a fabulous book called Vienna Waltz that just came out this month. It’s wonderful!)

Aloha, Andrea! I enjoyed reading SWEET REVENGE and glad to hear that you will satisify my sweet tooth with COCOA CONSPIRACY later this year.

Your new name is a welcome addition to the other wonderful books from your alter egos!

Thanks, Kim! So glad you enjoyed it!

Regencies about chocolate? I think I just died and went to heaven!

What a hoot! Your personalities are all battling to come out. They’re all here except DaRif!

And LOL, Diane. Clearly I was futzing with Google identities as I went along this morning. I think I finally got my head on straight

I love your books no matter which personality is in charge! I truly enjoyed the Circle of Sin books and I am looking forward to your mysteries. One of the things I truly enjoy when reading your books is all of the historical tidbits I learn without even realizing I’m learning them.

I’m interested in how you manage to keep the proper balance of romance and mystery in your romances and then mystery and romance in the mysteries – if that makes sense!

I enjoyed the interview, and I think Sweet Revenge sounds like a fabulous book. Having all the little tidbits about chocolate and being set in regency times, makes it all the more interesting to me. I’m looking forward to reading it and the rest of the new series.

Thank you very much for the nice words, Louisa! I’m so glad you enjoy history tidbits as much as I do.

That’s a great question about balancing romance and mystery in both genres. In romance, I try to make sure the plot don’t overwhelm the emotional development of the characters and their “love” story. In the mystery I get to develop relationships a little more obliquely, if that makes sense. They can be more ambivalent about each other, and their relationship can develop over several books, which makes a big difference in how I can work with them. It’s a little pyschological than physical, and I really like being able to do both, in two different genres.

Thanks, Barbara E and Dtchycat. I hope you enjoy the books!

chocolate mystery sounds fab. i’ll be sure to seek this out, and conrats on the rita nom

I still do not quite understand the necessity to change pen names. If you like an author’s style, you will very likely enjoy their books no mater what genre they write. It is hard to keep up with all the pen names.
I like your other books (written by your other selves) and this sounds like it will be a good series.
Best of luck, no matter what hat you are wearing.

And LibraryPat, I know the many names can be annoying to readers. Unfortunately, authors have little say in the marketing decisions that publishers make, so we have to wear the hat that is handled to us,

Wonderful interview, Andrea! I’m so looking forward to “Sweet Revenge”, which I have TBR, and to other books in the series. I love mysteries with relationships that evolve over the course of the series. And thanks so much for mentioning “Vienna Waltz.” Loved what you did with the Congress of Vienna in “To Tempt a Rake” and looking forward to Arianna and Saybrook going there for their next adventure.