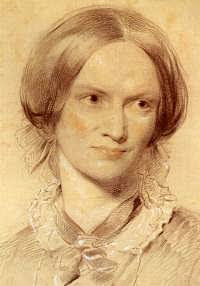 In honor of Charlotte Bronte’s birthday and as a followup to last week’s post about the latest movie version of Jane Eyre, I’m recycling a post from 2005 about the book.

[Update: I did finally publish Reader, I Married Him, and it’s a finalist in Passionate Ink’s contest for pubbed books, The Passionate Plume. Huzzah!]

It’s not my favorite Bronte–that’s Villette, also by Charlotte Bronte, a real kick-ass book that is even more brave, puzzling, difficult, and frustrating than JE.

I hate the fact that JE runs away from Rochester because he wants her to become his mistress–the fact that he’s lied through his teeth to her and taken advantage of her lowly status and lack of connections doesn’t really seem to bother her as much. The sexiest part of it is not the love scenes with Rochester (which I find cringeworthy), but life at Lowood. I remember reading it during adolescence and getting all steamed up in the early part of the book and bored with the rest of it, and couldn’t really understand why. Wasn’t it Mr. R who was supposed to float my boat? Although I have to admit that first meeting with the hound and the mysterious figure on horseback has a wonderful, mythic quality to it. The first sentence of the book is extraordinary for an era that specialized in purple prose (in which Charlotte Bronte did pretty well)–blunt, atmospheric, spare:

There was no possibility of taking a walk that day.

Very fitting for a book that is about repression, choices made from necessity, and the lack of opportunity for action.

My daughter, a tough, cynical sophomore (and English major) [in 2005] told me she was quite shocked by JE. Why? Well, there’s all that talk about mistresses, she said. It is an extraordinarily frank book in that regard–although of course all of Mr. R’s messing about took place on the Continent, where Englishmen went to behave like, well, foreigners. That makes it all the more shocking when he sets out to entrap Jane into a bigamous marriage. As for the fate of the first Mrs. R, it does make you wonder how many mentally ill female family members were quietly tucked away under the eaves. Better than sending them to a mental hospital, of course, but the same treatment could be meted out to disobedient or eccentric wives.

JE may be the first historical regency gothic. It was published in 1847, and is placed somewhere in the regency period. There are a few hints–a reference to a novel by Walter Scott, for instance–that place the novel anywhere in the first twenty-five years of the nineteenth century. I think Bronte is being deliberately obscure–it’s set in that period when England hovered on the brink of change that came about with the 1832 reform bill. It was a period that fascinated the Victorians–much of Dickens and George Eliot is set in the late 1820s–because afterward, everything was different. She’s writing about a time that is now history, from the perspective of the present, deliberately manipulating fact to fit fiction.

So, I really can’t avoid this: JE as a great love story. Well, yes, but… There’s Jane’s capitulation and surrender (on an emotional, not physical level) to Mr. R–almost–she’s always holding herself back, playing it safe, exercising caution and control. Jane is constantly reminding us of Mr. R’s brooding physical presence, his size, and ugliness, a Beast she cannot tame. It’s only when he’s debilitated by the fire that he become safe enough to domesticate. I don’t necessarily agree with the favorite theory that it’s more than his arm and eye that got damaged in the fire (and then how on earth did Jane get pregnant–I mean, I wonder anyway, but really, that’s just dumb…), but now Jane is the strong one, the heroine who makes the choice to begin her journey with him.

Over the years, I’ve been told there are Austen girls and Bronte girls. I’ve just never been a Bronte girl. I’ve read most (all?) of the sister’s collective books, but I’ve never re-read a single one of them, and none of them grace my bookshelf. (whereas Austen I have in HardBack and on my eReader).

I have to say, I vastly preferred your take on the story to the actual story.

Congrats on finaling in the Passionate Plume, Janet!

After seeing the movie, I found my old copy of JE and reread the end. I remembered the dark, intense moments like the terrible moment when Jane destroys her self portrait & her alarm at the fortune teller but I’d forgotten the tender humor in the scene when they reunite.

For instance, the exchange between Jane and R on the topic of St. John. First, R tries to get Jane to admit say she did not like St. John, then he pesters her to tell him St. John was ill-mannered and uneducated, which she can’t, and finally:

Rochester: “I forget what description you gave of his appearance;-a sort of raw curate, half strangled with his white neckcloth, and silted up on his thick-soled high-lows, eh?”

Jane: “St. John dresses well. He is a handsome man: tall, fair with blue eyes and a Grecian profile.”

I have what I call “Bronte Schizophrenia”. When I read “Jane Eyre”, see the movie, or go see a play (by the way two Decembers ago the PICT in Pittsburgh did an amazing Jane Eyre play) I simply adore it. I love the gothic parts and the crazy wife although my heart belongs to Sin Jin. But that’s just me. Then when I’m not reading or watching “Jane Eyre” I think…what a crap book that is/was. Why would I ever want to read or watch it again. My mind just can’t make itself up. One day I’m in love the next day I’m filled with hate. Hence the schizophrenia.

One of the biggest letdowns for me and “Jane Eyre” had to be “Jane Eyre the Musical”. How could you not give the crazy wife a song with a nice Rastafarian beat? I mean if anyone in the book calls out for a song, it’s Bertha. I’m just saying.

Congratulations, Janet! I’ll be rooting for you in The Passionate Plume.

I’d like at least one new film adaptation to include the fortuneteller scene, hee.

I’d say Charlotte Bronte created something noteworthy for us to be talking about it with so much emotion all these years later!

It has been so very many years since I have read Jane Eyre, that I can’t remember my reaction to it. It really is time for a good reread. You brought out a lot of good points that will improve the reread.

While I am most definitely and Austen girl I do love Jane Eyre. I love the beginning for the description of life at Lowood and for the characterization of Jane. I love the crazy wife because she shows what sort of person Rochester was as a young man. I love the rest of the book because it depicts two people who were meant to be together in spite of themselves.

@Isobel Carr, you’ve got to read Villette before you definitely decide you’re not a Bronte girl. I’m a Bronte girl for Villette, but otherwise an Austen girl all the way.

@Artie, I love the idea of a reggae song for Bertha but the idea of the musical is mind-boggling to begin with! I think tho that it would make a wonderful opera with the right librettist because there’s so much internal stuff going on.

@Louisa, I think Bertha represents female sexuality and that’s why she’s such a threat to a sensualist like Rochester.