On the Way to the Retreat

Like Elena, this past weekend I was at a Retreat–Washington Romance Writers Spring Retreat. Not to work, but to be “In the Company of Writers.” We had speeches and workshops and Romance Jeopardy and much conversation. More about that on Thursday at Diane’s Blog. 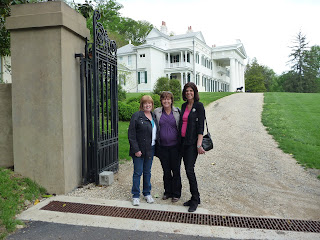 Melissa James, my Aussie friend who lives in Switzerland, and I started being “in the company of writers” even before the official start of the Retreat. We joined my critique partners, Lisa Dyson and Darlene Gardner, for lunch and a visit to an historical estate in Leesburg, VA, Morven Park. (L to R: Lisa, Melissa, Darlene)
Morven Park reminded me so much of English country estates in Regency times, not that its heyday was in the early 1800s. Rather, its grand days were 100 years later, in the first half of the 1900s. Westmoreland Davis and his wife Marguerite Inman Davis were a wealthy couple originally from Old South families who had made fortunes in New York. In 1903 they purchased Morven Park, a Greek revival house originally built in 1750, and 1000 acres surrounding it. Davis was an engineer and a lawyer, but he embraced the role of farmer, publishing a farming journal and utilizing the latest farming techniques. His wife ran the house and designed the gardens. 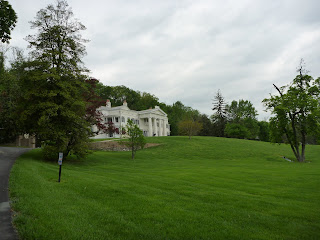 What reminded me of a Regency estate was the way Davis conceptualized the role of gentleman farmer. He felt a great deal of responsibility for his farm workers and for the owners and workers of the surrounding farms. Like a Regency lord might feel a sense of responsibility for an entire village, Davis made certain his community prospered along with him. During the Depression, for example, Davis never laid off any workers. He funded the town’s library and paid the librarian during the Depression. He even served in government. He was governor of Virginia from 1918 to 1922. 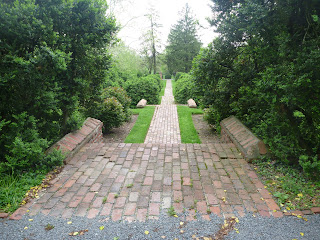 It was that sense of responsibility for others in the community that reminded me of a Regency lord. Like Davis, the best Regency lord would have known that people around him could either prosper or suffer, depending upon the decisions made. Like a Regency gentleman, he would have been a farmer, his fortunes rising or falling due to the crops grown there.
Morven Park was a surprise and a delight. And the perfect start to a wonderful weekend. But more about that on Thursday.
How was your weekend?
Later today visit my website for new news and a new contest!
Posted in Uncategorized | Tagged Country House | 7 Replies
0 0 votes
Article Rating
Subscribe
Login

I actually spent the weekend on my parents’ horse farm, so it was really neat to see they’ve got an equestrian center at Morven Park! I’d love to see it someday. Looks like you guys had a blast!

Every year, I look forward to your news about the WRW retreat. It sounds like a magical event. Some day, perhaps, I’ll even be able to attend.

It’s beautiful! Thanks for sharing it, especially for those of us who couldn’t be there, but wish we were.

We were very pleasantly surprised at how interesting and beautiful it was at Morven Park, Alyssia.

Keira, you must come to the Retreat someday! I’d love that. I promise a place to stay before and after and transportation to and from!!!

Judy, more specifics about the Retreat are forthcoming on Thursday.

What a lovely house! I am putting it on my must-visit list 🙂

What a gorgeous house! And what an interesting gentleman the owner was. Very much the Regency lord type.

And I’m with Keira! I love hearing about the retreat and I would love to attend one day!

My weekend was spent writing, cleaning up the damage from the tornadoes and helping some of my neighbors who fared far worse than I did.

What a lovely spot. It is a really nice area. When we lived in the DC area, drives out into Northern Virginia were a favorite pastime. We would often take a different route down through VA to visit our daughter in NC. Routes 29 and 15 go through some lovely country.