Dark Mirror – My First YA 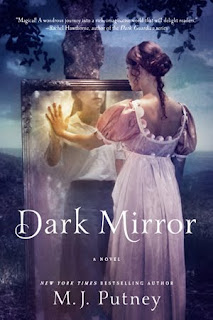 I’m going to reveal a big secret. Until now I’ve never read a Young Adult novel. Nope. Not even the Harry Potter books. Nothing since I was a teenager and then they weren’t called YAs. But M. J. Putney’s publicist sent me her first YA, Dark Mirror, and that book became my first YA.

Now, I don’t know why the publicist sent me the book. I do know Mary Jo Putney, but I am much more likely to send her a book of mine to read than the other way around!
I think the first traditional Regency I ever read was Mary Jo’s The Rake and The Reformer. It is still a favorite. My third Washington Romance Writers meeting was a workshop by Mary Jo on synopsis writing.

We were invited to read her latest book before the meeting and write a synopsis of it for her to read aloud and critique. Only two people attending the workshop actually wrote the synopsis. The first person did it all wrong; she wrote a chapter by chapter outline. I had written a pretty good synopsis and actually received applause, but the joke was on me ultimately. The person who’d written the lousy synopsis was Catherine Asaro, who hit it big in sci fi/fantasy about a year later.

Mary Jo actually helped me plot The Mysterious Miss M. At one of our WRW Retreats, she gave me some good advice on a couple of plot points, advice I followed.
So, for all those reasons, I was highly motivated to read Dark Mirror.
Mary Jo loves Fantasy and loves the Regency. Dark Mirror combines the two. MJ’s Regency is a place where having magical powers, like flying or controlling the weather, is a great scandal. Those young people who display magical powers are sent to Lackland Abbey, a boarding school whose sole function is to remove the students’ magical powers. A group of students and teachers meet in a labyrinth underneath the school to do the opposite, to increase their powers. One night the heroine Victoria falls through a mirror, the time portal, and travels into the future. Ultimately Victoria and her friends travel to 1940 and wind up helping in the evacuation of Dunkirk.
I thoroughly enjoyed the book. It was a satisfying read with appealing characters, surprises, and lots of clever connections using the magic.
Since this was my first YA, though, I also read it with an eye on what makes it a YA. Here are some of my ideas:
1. The main characters are teenagers; adults are much more peripheral.
2. The main characters band together to help adults in important ways.
3. The characters think about things teenagers would think about: friends, clothes, which boys are cute, does he like me?
4. There is a little bit of a message about friendship in the book: not to necessarily believe in your first impression of people.
5. The prose is just a bit simpler. The vocabulary and sentence structure a bit more accessible. This is not to say it is “dumbed down,” just simplified a bit.
What other elements distinguish a YA from an adult book?
What are your favorite YAs?
Have you read Dark Mirror?
Don’t forget to read my sneak peek at Valiant Soldier, Beautiful Enemy and enter my new contest over at Diane’s Blog. Something new is coming at the website on Thursday so don’t forget to visit!
Posted in Uncategorized | Tagged MJ Putney, YA novels | 14 Replies
0 0 votes
Article Rating
Subscribe
Login

I’ve read YA for years, or I wouldn’t have dared write it. But basically, a good story is a good story.

BTW, my second YA, DARK PASSAGE, will be out in September. They like you to write fast in YA!

Oh Diane! I am 31 and adore reading YA novels. And M. J. Putney’s sounds amazing! (I just bought it). There are so many YA novels I love. I simply adore “Chasing Vermeer” by Blue Balliett. It is a great way to teach children about art and math and learning. There’s another Regency era set of novels that has magic involved. “Sorcery and Cecilla or The Enchanted Chocolate Pot”. It’s written in the form of letters. The two authors would write letters back and forth and those letters became the novel. Neither knew what was going to happen. They’d received the letter and have to go with what it said. It’s great fun.

I hope that you decide to continue reading YA. I know there’s so much out there to read, but they are so much fun. Plus there’s a lot of Austen updates. “Pies and Prejudice” or “Prada and Prejudice”. Oh and there’s a whole series by Rosie Rushton that rewrites all the Austens. Plus Meg Cabot has three Regency YA novel.s

Okay I’ll stop. But this is an area I really know!

My favorite YA is Sarah Maclean’s The Season – oh how I wish she would write more of these, but then again, I want her to write more of just about anything! I have found myself actually reading more YAs lately, maybe 1-2 a month, mainly because they are more romance based, lately it seems like alot of what I read seems to be more about the sex than the romance. I will have to check out some of Mary Jo’s YA books!

I have two daughters so I have been enjoying YA’s for a while. The Harry Potter series and Twilight and the Hunger Games are some of my favorites. My 27 yr. old daughter has introduced me to all of those series and enjoys YA’s very much. Those and Oprah’s picks roflmao. I enjoy time travels and regencies so Dark Mirror sounds wonderful. I’ll have to let my daughter know!

The Rake and the Reformer is my favorite Regency, too.

I first met Mary Jo Putney at the booksigning following a writers’ conference in Columbus. I had a baby in my arms (my husband had watched her for the day but needed a break), I’d barely begun to write and I probably asked some ridiculous newbie questions. Despite all that, Mary Jo was gracious and supportive, as she has been every time I’ve met her since.

Now that baby is into historical YA, which I enjoy too. I bet we will love DARK MIRROR!

Is this school of anti-magic the same one attended by the hero of MJP’s “The Marriage Spell”? I liked that book and would be happy to enter that world again.

Now that my children are grown I still read YA, just not as much as I did when the boys used to leave books on every flat surface in the house and it was a fight to see who got to read the Rosemary Sutcliffe or most recent Harry Potter first. In the past few years I’ve discovered some excellent new authors on my own, such as Megan Whalen Turner (whose Thief series has a gripping love story), Markus Zusak (adored his “The Book Thief”), and Eva Ibbotson (whose romances are now marketed as YA).

Elena, I’m delighted to hear that baby is growing up to be a reader! You’re raising her right: surrounded by books. *g*

Susan/DC–This isn’t exactly the world or the school of The Marriage Spell–but it’s similar because I was nowhere near done with that idea. Lackland is coed, and the books are YA, but if you like TMS, there’s a good chance you’ll like Dark Mirror, too.

How lovely of Mary Jo to stop by!!!! (Waving madly to her)

JA, you are a great salesperson for YA!!!

Dtchycat, I suspect you are not alone in liking YA for the romance minus the sex! Sometimes we just want a good story.

I think kids today are very lucky in the variety of YA fiction available today, catslady. How funny your 27 year old likes YA and Oprah picks!

Elena, I love your MJP story!!! And how perfect that that “baby” will now be a MJ Putney reader!

Susan/DC, a gripping love story? I’m sold on that one!

Haven’t read DARK MIRROR, though it sounds intriguing. Favorites are Harry Potter and Twilight, but I’ve not read a lot of YA.

I’ve been reading quite a lot of YA lately (in fact, now that I think about it, the majority of my fiction reading has been YA! Not that I have nearly enough time for reading fiction, lol). I like the variety of settings (like the Gilded Age New York of “The Luxe” books) and the “character’s journey” nature of so many of the plots. Right now I’m reading a new YA steampunk, “The Girl in the Steel Corset”

Will have to look for “Dark Mirror”!

I’m always surprised to hear how much YA my adult friends read. I think the current trend for sexy books doesn’t reflect the variety ou can get in YA.

(MJP waving back to Diane and other Risky Regency pals)

There are a LOT of adult YA readers because a good story is a good story (my mantra *g*) and there are also wonderful crossevers that would be much harder to do in other genres.

Jane Austen, thanks so much for the suggestions of other YAs. More books to fine!

Amanda, just as romance is at always at heart a courtship story, YAs are at heart charcter journeys, as you say. There may be romance, disaster, magic, whatever, but throughout the book, the characters are growing and learning what kind of adults they want to be.

This is fun. *g* Thanks so much for doing the review blog, Diane!

My pleasure, Mary Jo!!! Thank you for giving me the pleasure of reading Dark Mirror… and many many hours of pleasurable reading over the years!

@Diane Gaston,
Yes, there is a gripping love story in the Thief stories, but you need to read them in order. The first book stands on its own but on first reading you’ve no clue about what is to come. Only after you read the next two books do you understand why what happened in the first was so important in laying the ground for what followed (plus, it’s a cracking good adventure). They are fast reads, and I encourage everyone to try them.