So, what is going on here this Tuesday? Well, lots of writing for one thing! I am still finishing up two different projects, the first in a new Laurel McKee series set in Victorian London (which now has an official title! One Naughty Night, June 2012) and an Amanda McCabe “Undone” story set around a wild Regency Christmas party. I do not recommend this write-two-things-at-once thing, but they’re almost done now, and since both are due June 1, I will have a month to recover before RWA! In the meantime, I have nothing coherent to say here, so this is what I’ve been doing lately: 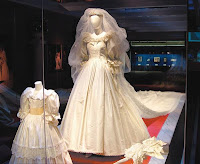 I took a little break last weekend to go to Kansas City and see the Princess Diana exhibit on its last stop before it goes back to Althorp. It was fascinating to see so many of her famous gowns in person (including the wedding gown! It looked better on display than in photos, but it was still a lot of dress), along with some beautiful antique jewels and portraits of past Spencer women (including Georgiana Duchess of Devonshire). I also went to the Nelson-Atkins Museum to see the Monet water lilies triptych (the three panels put together for the first time since they were all sold to different museums decades ago), and did some shopping at The Plaza. It was a great time, but then it was back home to get to work…

Has anyone else been watching South Riding on “Masterpiece”? If not, you really, really should, as it is very good (and stars the fabulous Anna Maxwell Martin) and I can’t wait to see what happens. A big turnaround from the misbegotten new Upstairs Downstairs (I did like the monkey in that series, as well as the fabulous bias-cut gown Lady Agnes wore to the ill-fated cocktail party, but, er, that was about it).

In other news, my novella Snowbound and Seduced is a Bookseller’s Best finalist. Yay! I’ve been reading two great books, Chris Skidmore’s Death and the Virgin Queen (revisiting the mysterious death of Amy Robsart after new documents have been found) and the YA steampunk The Girl in the Steel Corset (I admit, I picked it up because of the cover, but it is a really fun read), and my roses are blooming and tomatoes are growing in this new hot weather.

That’s it for my Tuesday! What have you been doing lately? Read any good books, seen any good movies? (I’m trying to decide if I want to go see Thor and look at some mindless hunk-dom as a break from writing…). What’s your favorite Princess Diana fashion moment? Are you going to be at RWA next month?

Sounds like you’ve been busy. I must check out The Girl in the Steel Corset as the cover is just gorgeous.

Sunday I went to see Something Borrowed, which is based on a book I really like. It was different from the book, but had some good parts. Although I’m beginning to think “I wish Hollywood would leave my favorite novels alone!”

Currently I’m reading Kate Noble’s Follow My Lead and it’s great fun. Although the female lead is a bookish girl with a love of art history so I can completely relate.

I love the white dress and pearl encrusted jacket with the high collar the Princess Diana wore. I just think it’s stunning.

I’ve also been doing research on Renaissance Florence for my novel. It’s fun to get to watch PBS documentaries and call it “research”. It really is, but it’s fun research.

Speaking of PBS I’m loving South Riding, but it’s very dark, is it not? Or am I the only one who feels that way? I’ve been looking up the disease the wife had and am very confused. It’s a type of mania woman had after giving birth and they would kill the child or themselves. Apparently it was a huge problem in England…especially Victorian. (I know South Riding is not Victorian). My one question is how did she know in advance she would have this mental break if she had never been pregnant? I can’t find that it’s genetic or that there are warning signs. But it did change laws in Britain. There is a law still on the books about Infanticide and the punishment for killing your baby is actually quite less in the UK than in the US because of this law. They see the mother as in a fragile state after giving birth. It is considered most times to be manslaughter and not murder. How interesting.

It IS a bit of a dark story, Artie–I’m hoping they don’t shy away from that like “Upstairs Downstairs” did)! And I was also curious about the exact nature of the wife’s illness–it seems like she was kind of crazy before the pregnancy (trying to jump off the roof, etc), but how did they know postpartum issues would make it worse? I will have to look it up once I finish these deadlines. But I am loving Sarah’s character, and the scholarship girl (is it too much to hope that things will work out for her???)

I have South Riding saved on my DVR, and Upstairs Downstairs. And I have a June 1 deadline, too, Amanda!

Hooray for your Bookseller’s Best final!!!!

What have I been reading? Well, I recently read your Undone, The Girl In The Beaded Mask, and thoroughly enjoyed it!

I have been digging unsuccessfully through all the stuff we have. We bought a victorian farm house that need to be gutted and totally redone. We played “musical rooms” and “lets move the boxes” for way too many years. In addition to that, we have three other peoples entire house holds boxed up and stored here. We have taken truck loads of stuff to different charities, but the piles don’t seem to go down. I will admit much of these boxes are filled with books. We don’t have enough bookshelves for them all, 40+ bookcases, and there is no more room to build any more.
The tornadoes in TN hit within 200 yards of us. We didn’t get any damage except for branches. The neighbor’s barn was damaged, so we are working on taking it down and salvaging some of the wood and metal. .
Nothing muuh new and exciting .