‘Twas on a May-day of the far old year
Seventeen hundred eighty, that there fell
Over the bloom and sweet life of the Spring
Over the fresh earth and the heaven of noon,
A horror of great darkness, like the night
In day of which the Norland sagas tell,
The Twilight of the Gods. The low-hung sky
Was black with ominous clouds, save where its rim
Was fringed with a dull glow, like that which climbs
The crater’s sides from the red hell below.
Birds ceased to sing, and all the barnyard fowls
Roosted; the cattle at the pasture bars
Lowed, and looked homeward; bats on leathern wings
Flitted abroad; the sounds of labor died;
Read the whole of John Whittier Greenleaf’s poem here. 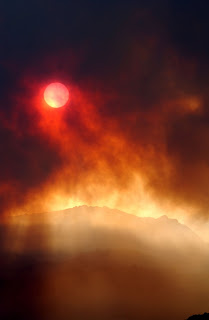 The “far old year” of the poem was 1780, and May 19 the day on which darkness descended upon a huge swath of New England from Portland, Maine south, with duskiness extending as far as New York. Philadelphia was not affected. Some thought it was the end of the world; some were amazed at the way the light changed colors, silver appearing as brass, green grass taking on a new richness.

The day was ordinary enough at first, although people remembered that in the few days before the sun had assumed a strange, rusty color in a yellow sky. And then in mid morning darkness fell, with all the phenomena that Whittier described (although he was born after the event almost certainly he knew those who had experienced it first hand). It lasted over 36 hours.

In some places, the darkness was so great, that persons could not see to read common print in the open air…. The extent of this darkness was very remarkable.

The darkness of the following evening was probably as gross as ever has been observed since the Almighty fiat gave birth to light…. A sheet of white paper held within a few inches of the eyes was equally invisible with the blackest velvet.

By 12, I could not read anywhere in the house — we were forced to dine by candle light. It was awful and surprising.

So what did cause the Dark Day of New England? Tree ring analysis from Algonquin Provincial Park in eastern Ontario has revealed that it was smoke from massive forest fires.

I love this sort of phenomena even if I’d never dare invent something similar and include it in a book. That’s not to say I’d want to experience 36 hours of darkness, but if it did happen (and you weren’t busy praying or drinking like New Englanders in 1780) and you had only candlelight, how would you spend the time?

Although they said there was a baby boom 9 mos after the great Northeast blackout of 1965, a demographer debunked the claim.

That blackout, at least according to my husband’s Italian grandparents, was caused by my very own husband who had been fooling around (not that kind of fooling around-he was just a kid) in their basement . When the lights went out they yelled down, “Jimmy! What did you do?”

Carolyn, that’s what I thought. I wonder if anyone’s researched it?

Me, I’d read by candlelight and ruin my eyes. Snuggle up under the down quilt and sleep a lot. Actually I think it would drive me crazy.

I’d be nervous I am sure. Knowing me, I would be outside trying to figure out what was causing the phenomenon.

Diane, I remember that blackout. We were having a birthday party for my mother and had a houseful of relatives and friends. We lived a ways out in the country. We lit candles and visited a bit. When everyone realized the power wasn’t coming back on any time soon, they went home.

The fires here in NorCal are unmistakable smoky affairs. I don’t see how you could not tell what was causing it. But perhaps I’m just cranky. 🙂