So, what has Amanda been doing this week? Well…..

1) Writing! One project done (I think–or maybe I’m just sick of it now), one to finish. Then one to start. And RWA in about 4 weeks. Good times.

2) What to do since the Vampire Diaries season is over and True Blood hasn’t started yet? Thanks to the wonders of Netflix streaming (honestly, what did we do without this??), I have been wasting much time watching many episodes of Top Gear. That show is made of awesome. Also Bollywood movies.

3) Getting my (very excited) little ballet students ready for their recital in two weeks. It is all pink tulle all the time over there now!

4) Also getting ready for book three of my “Daughters of Erin” trilogy to hit the shelves next week! Visit us Sunday for the chance to win a signed copy. It’s hard to say good-bye to these characters… (and the first reviews are coming in! Here and here...)

My current project (One Naughty Night, which will be out from Grand Central Publishing in June 2012) is Victorian-set, so I’ve been spending a lot of time reading Victorian research books lately. In trying to find something to blog about today, I discovered that May 24 is Queen Victoria’s birthday! So happy 192nd birthday. 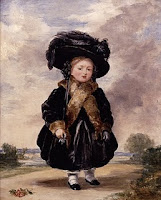 Princess Victoria was born on May 24, 1819 at about 4:15 in the morning at Kensington Palace to Edward, the Duke of Kent (4th son of George III) and his wife Princess Victoire of Saxe-Coburg-Saalfeld (sister of Princess Charlotte’s widower Prince Leopold). Princess Charlotte’s death in childbirth in 1817 set off a succession crisis–none of King George’s many sons had managed to come up with any more legitimate heirs, but they now scrambled to find suitable wives and produce little heirs to the throne. Victoria was born 5th in line of succession, after her father and his three elder brothers, the Regent and the dukes of York and Clarence. The Regent was long estranged from his wife Caroline, and now his only child was dead; York was also all but estranged from his wife, and she was too old to have children anyway; and Clarence (who married his wife Adelaide the same day as the Kents) had two legitimate daughters who died in infancy, even though he had copious amounts of children with his longtime mistress Dorothy Jordan. Victoria won the heir stakes.

She was christened in a small ceremony by the Archbishop of Canterbury in the Cupola Room at Kensington Palace on June 24. She was meant to be named Victoria Georgina Alexandrina Charlotte Augusta, or some combination therein, but the Regent threw a big fit which made the Duchess of Kent cry and made them take off the Georgina (after him) and the Charlotte (because of his daughter). The Alexandrina was after one of the baby’s godfathers, Tsar Alexander of Russia.

Victoria’s father died in 1820, and her childhood she later described as “rather melancholy.” For more information and images, you can go here…

What is your favorite TV show right now? Did you watch the Vampire Diaries season finale (what did you think)?? Are you going to be at RWA this year? And who is your favorite dysfunctional family in history? (The Tudors, maybe?)

JUSTIFIED, hands-down. That show is full of awesomeness. As it’s short season is over though, my favorite thing airing right now is GAME OF THRONES. Love the books, and so far I’m pretty happy with what HBO has done with the show.

Isobel, I have had SO many people tell me I should watch “Justified” (especially when I start whining about losing “Deadwood”)! I must make this my summer watching project…

My goodness. I haven’t even heard of Justified!! I’m still on a Say Yes To The Dress kick. And eagerly awaiting the finale of The Biggest Loser.

And Happy Birthday to Victoria!!!!

Happy B-Day Queen Vickie! Loved your movie Young Victoria!
Watching the finale of Dancing with the Stars & the last few days of Oprah (until she does something on OWN!). Dysfunctional families – how about the Borgias? I think they are having their own series.
Soon the USA Summer schedule starts – try The Glades!

Believe it or not I don’t have actual television and I have had the DVD of Season One of True Blood on my shelf since it came out and I STILL haven’t watched it. I have no idea why. Probably a combination of no time AND trepidation as I was reading the books when no one had ever heard of Sookie Stackhouse.

I do have every single season of CSI (Vegas version) on DVD. They are my only guilty pleasure set in THIS century. LOL

Wish I could see your little ballerinas. I know they will be adorable!

And Happy Birthday to Queen V !

I’m really looking forward to seeing everyone in New York!

BONES is the favorite in our house. We don’t get any of the premium channels so have missed several series that sounded pretty good. My husband isn’t into anything paranormal, so I haven’t even tried any of those. I have heard many good things about Justified and it sounds like one my DH would like, but I don’t know if we get FX. I like the summer because the regular shows are in reruns and we can try something new.