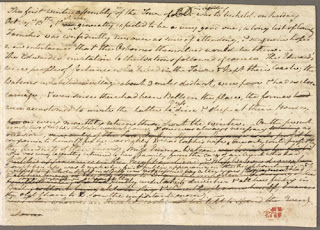 Sotheby’s made the announcement a few days ago that one of Jane Austen’s original manuscripts is coming up for sale in mid July. It’s of The Watsons, consisting of 68 heavily corrected pages. It’s the largest existing original manuscript of any of her novels. The only other one that survived is two canceled chapters of Persuasion in the British Library.

It’s not even the whole thing. The first twelve pages were sold by a descendant to raise money for the Red Cross in World War I and are now in possession of the Pierpont Morgan Library, NY. The next few pages were somehow lost while being “looked after” by the University of London. So the remaining pages are being sold by the anonymous person who bought them in 1988 from the British Rail Pension fund, which obviously went in for some odd investments. The Fund should have hung onto them because they probably didn’t count on at least one of the retirees making it to 100 (my dad, still hanging in there).

The pages are quite small; Austen apparently liked to cut sheets of paper in half and fold them into an 8-page booklet.

So if you have about $485,000 burning a hole in your pocket in mid July, you might win the auction.

I really hope a museum wins The Watsons. I hate the idea of coming upon this tantalizing news item and knowing there’s a possibility no one will ever see it again; it makes my Jacobin blood boil. And I wonder how the person who, uh, borrowed those missing pages feels. Does he or she take them out for special occasions and admire them? Share them with a few friends bound to secrecy?

If you owned something as precious as this, what would you do with it? Hand it over to a museum on permanent loan and go and visit occasionally?

Hey, Janet! Wow, this is incredible. I do believe if I had something of this magnitude, I’d definitely put it on permanent loan to a museum. Why? Well… why not? Jane Austen’s works have meant a great deal to a great many people for decades upon decades–wouldn’t it feel wonderful to you as the owner of something so precious to share it with fellow history/literature lovers?

Oh if had custody of something this precious it would definitely go on permanent loan to a museum (one capable of keeping up with it and not losing a few pages here and there!)There are some things which belong to the human spirit and they should never be in the custody of just one human.

I read over and over where the stately homes of Britain are sold and then basically looted as individual pieces, some of which have been in the same family for hundreds of years, are sold off to private collectors. I realize many of these homes are expensive to keep, but I truly wish those purchasers would be required to keep everything intact as a service to history.

I’m with Alyssia and Louisa, definitely I would put the item in a museum. It would give me pleasure to know that I am the owner. That would be enough.

I think it would depend on my financial position at the time, whether or not I would donate. I am put off with museums a bit. When I was in high school, there was a big anniversary celebration of some sort. My dad had been talking to a woman at the historical society about a book he had about the county in the early 1800s. She asked if the society could look at it, so he brought it in. They never returned it after many requests. Over the years I have loaned a few items, but only if certain I could get them back.

I think these pages show what we are missing by having a bulk of the writing being done on computers today. We no longer get an intimate look at the isory and how she wrote it,