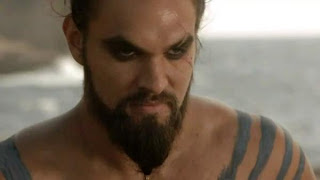 Last week, Blogger was being a pain, so I wasn’t able to post. I know you all missed me!

So I have been writing (although a snail would mock me at how slowly I’m going!), and reading, and such, and I was pondering just why I read so much fantasy and paranormal in addition to my previous inhalation of historical romance:

I read historical and PNR/UF novels for the same reason: I like to escape the everyday world into a fantastical one, whether it’s populated by men in waistcoats and cravats or men in leather and armor. I like the authors’ world-building, which is likely why anachronisms and tweaking of the ‘real’ history in Regency-set novels doesn’t bother me as much as it does some people.

Right now, I am reading A Feast for Crows, the fourth novel in George R.R. Martin’s A Song of Ice and Fire series (currently showing on HBO as Game of Thrones). I’ve got Laurel McKee’s next book on its way, as well as Carolyn Jewel’s (and wouldn’t it be neat if they came in the same package?), both of whom are incredible at creating their particular worlds. Laurel’s book is set in Georgian Ireland, while Carolyn’s is sets sort of now, but with demons and mages and magic.

Two completely different books with a common thread of world-building.

That’s why, with a few exceptions, I don’t read contemporary romance. I don’t find it compelling to read about the world in which I do, or could theoretically, live. I like escapism, fantasy, elegance, the occasional dose of magic.

Could that be why you read historical romance? Or other genres that include world-building?

This entry was posted in Uncategorized and tagged Carolyn Jewel, Laurel McKee, Megan. Bookmark the permalink.