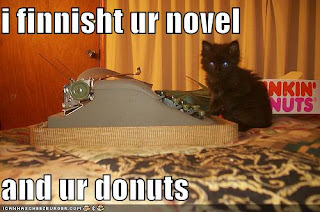 Happy Tuesday, everyone! What have I been doing this week, since I am free of deadlines (free, I tell you!), at least for the moment? Well, I have been sitting around watching season 3 DVDs of True Blood, trying out some kickboxing classes (and trying to figure out how to write an awesome kickboxing Regency duchess heroine–I’m pretty sure that won’t work out though), starting to get ready for RWA (less than three weeks away now, ack! At least I did remember to take my gown to the tailor), going to the movies, and getting caught up on reading. More on that later.

I was also thinking about Janet’s post last week about reviews, and about various things I’ve been seeing around on-line concerning yet more thinly-veiled misogyny masquerading as high-brow readership (Ew! Romance! Only old ladies and stupid people read those!). (for example, see this great post on AAR, Top Ten Cliches About Romance Novels I Never Want To Hear Again). I’ve been reading and writing romance for a long time, and bad reviews and snarky comments mostly roll off me by now (no time for them–deadlines and all that), but they still can piss me off when I take time to think about it (so I try not to).

One of the books I was reading this weekend was Tina Fey’s Bossypants, and she had this to say, which struck me as great advice for women no matter what artistic or business endeavor we’re pursuing. (Sorry for the long excerpt, but she says it way better than I could!):

I don’t say it out loud, of course, because Jerry Lewis is a great philanthropist, Hitchens is very sick, and the third guy I made up.

Unless one of those men is my boss, which none of them is, it’s irrelevant. My hat goes off to them. It is an impressively arrogant move to conclude that just because you don’t like something, it is empirically not good. I don’t like Chinese food, but I don’t write articles to prove it doesn’t exist.

So my unsolicited advice to women in the workplace is this. When faced with sexism or ageism or lookism or even really aggressive Buddhism, ask yourself the following question: “Is this person between me and what I want to do?” If the answer is no, ignore it and move on. Your energy is better used doing your work and outpacing people that way. Then, when you’re in charge, don’t hire the people who were jerky to you.

If the answer is yes, you have a more difficult road ahead of you. I suggest you model your strategy after the old Sesame Street piece “Over! Under! Through!” (If you’re under forty you might not remember this film. It taught the concepts of “over” “under” and “through” by filming toddlers crawling around an abandoned construction site. They don’t show it anymore because someone has since realized that’s nuts)…

Again, don’t waste your energy trying to educate or change opinions. Go “Over! Under! Through!” and opinions will change organically when you’re the boss. Or they won’t. Who cares? Do your thing and don’t care if they like it.”

So yeah, this book is hilarious and you should totally read it (though how can someone not like Chinese food??). Also she’s right, and that is now my new motto. Over Under Through. (Plus a cynical laugh and knowing look when someone tries to disparage romance fiction seems to work wonders)

What have you been doing with your time this week?? What is your strategy for dealing with annoying people?

I am tying up some loose ends at work before I go on holiday (yay!) next week.

I deal very simply with annoying people: If they don’t matter, I ignore them altogether, but if they do matter (I need something from them or I work with them and have to see them every day) I analyse why they annoy me and then I tell myself they are to be pitied for being the way they are. Being able to pity someone gives you an edge in dealing with them and makes you feel superior and for me it usually makes me less annoyed with them.

I’ve been writing, plotting, editing, and judging for an Ohio contest. Oh! And working the day job, of course–bleh.

You know, I’m so glad you brought up the cliches of romance (and Tina Fey, too, because I just love her…), because it reminded me of something Teresa Medeiros said some time ago on her blog:

“So if any of you are ever leered at, sneered at, or otherwise degraded for writing or reading romance, simply blink and gently say (really quickly), ‘What the romance novel is really all about is the archetypal human struggle of integrating the masculine and feminine aspects of our psyches.’ I can promise you that nothing will shut them up faster.”

I quickly adopted this attitude, though I must admit, I haven’t had to defend myself too often. Mainly against men and women who read literary fiction and think authors who write literary fiction are automatically brilliant. It’s all in the perception of the reader, people. Get over yourself.

Well, if you don’t know I’ve been finishing up a book you haven’t heard me whining and complaining the last few weeks!

Sunday I emailed the book to editor. Monday I think I can just relax….then said-editor emailed me asking for revisions for my next Undone….by next Monday. So I’m doing revisions……

I’ve been rewriting a couple of chapters to add a layer of tension… [sigh for the extra work]. A neighbour called in [a Latin teacher and sports freak] and, after looking at my postcard advert for my new book, remarked: ‘I don’t read THAT’.
Being polite, I asked: ‘Don’t you like history?’
‘Oh yes,’ she said, ‘but not THAT’ [tone of loathing].
I haven’t digested it, have I? So will reread your post and perhaps write a Latin tutor into my story – who gets a nasty end. Hmmm. There’s more than one way to skin a cat.

Tina Fey left out the other way listed in the old Sesame Street video: around. Going around obstacles may take a bit longer but is often just as (or even more) effective than trying to muscle one’s way through (which reminds me of the Wintston Churchill quote: “when going through Hell, keep going”). I also like Bibliophile’s advice to pity the poor souls who dismiss an entire genre they’ve never read — they definitely don’t know what they’re missing.

“and then I tell myself they are to be pitied for being the way they are.”

Bibliophile, this is so, so true! 🙂 (the funniest example I have of someone being rude to me about my writing was this guy I met at a party last year. When he found out what I do for a living, he spent much too long making fun of romance fiction/proving his superior literary taste/etc until I could sneak away. Then he asked me out. Possibly the most clueless move I have ever seen, LOL)

My BFF’s hubby doesn’t like fruit. Yelling David doesn’t like fruit! has become our circle’s way of ending any and all discussions that appear to be becoming arguments. Because immediately, people turn and start quizzing the poor man: Like all fruit? Even bananas? What about tomatoes, they’re a fruit, right? I think yelling Tina Fey doesn’t like Chinese food! would have the same effect. Really? Not even Szechuan? What about egg rolls. Everybody likes egg rolls.

My strategy for dealing with annoying people: email filters. Their emails go straight to trash.

If they’re not trying to get to me via email, I find a mental filter helps a lot. I can’t hear them so I just smile and nod, and they decide — whatever is it annoying people decide, and go away.

That works most of the time.

Working on rewrites and revisions on novel number three so I can put it into agent’s hands to sell !! Getting ready for Nationals too! Three weeks! Yay! Can’t wait to see everyone.

How do I deal with annoying people? A little trip to the alligator farm seems to bring people around to my way of thinking. (WINK!)

Actually I tend to measure everything by the then year rule. Is this person or opinion going to matter to me ten years from now? No? Then to heck with it.

Oh, Isobel! LOL! I am so going to use that strategy next time I don’t like the course of the conversation. It’s true though–doesn’t everyone like egg rolls at least??

Louisa, can I bring a few people over to see that alligator farm this weekend? 🙂

The raspberries are ready to pick and unfortunately, won’t wait to be picked. We did loose some, but I had a thick raspberry pie tonight, froze enough for another pie, and still have a big bowl in the fridge. Tomorrow I will pick some more, and get some flowers in the ground. It has been so hot and so dry for so long, everything is drying up. The ground is like cement and it is hard to weed and plant.

As for annoying people, I try to ignore them. It is often hard to do. I try to figure what their problem is and see if I can deal with that so they will stop annoying me. If they are nasty annoying, I figure a higher power has a special place for them, and they will spend a long time in a not so happy place for not being nice.

When I worked as a librarian, I would get the comments, usually from men, about what a waste it was to read romance. The same people were reading some of the men’s series, especially westerns.. I read one for comparison, and that was more than enough. Not much of a plot, no character development, not the least bit realistic and way too predictable. It made Harlequin series romances look like the great American novels. This is not to say all romances are good, they aren’t. For the most part, the do represent research, a lot of thought, and dedication on the part of the author. All that usually results in something worth reading.