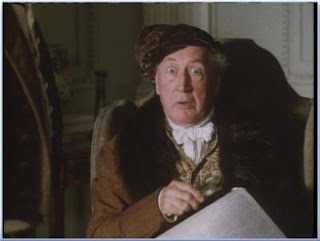 Given the choice between the Battle of Waterloo and father’s day, dads win hands down. I’ve blogged before about the horrible casualty rate of that day and, although we’ve made a big celebration of Waterloo in the past, I think we should remind both his grace and his excellency not to stage a major battle two weeks before RWA Nationals!

So, fathers. They don’t do too well in fiction. In the words of Katha Pollitt, in her poem ReReading Jane Austen’s Novels, Papa’s/a sort of genial, pampered lunatic, and I think that’s a tradition that’s stuck with us. Some do it better than others–Miranda Neville‘s brilliant Mr. Montrose and his weighing fixation, for instance, in The Dangerous Viscount. He is, unlike most of Austen’s fathers, mostly harmless.

Quoting Katha Pollitt again, This time round, they didn’t seem so comic. So let’s take a look at Austen’s fathers, surprisingly creative for a woman whose own father was intelligent, affectionate, and well-respected.

Dead and/or fiscally irresponsible. Mr. Dashwood, you really should have sorted out the business of your wife’s and daughter’s inheritance rather than leaving it up to your son and his wife. Mr. Bennet, get out of the library and see to your investments. Mr. Price, put that bottle down now and give Mrs. Price a rest (if you know what I mean and I think you do). And would it kill you to lend a hand around the house? 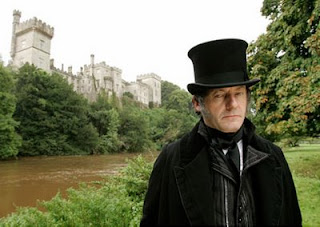 Generally unpleasant. Sir Thomas Bertram, I’ve always thought you’re a bit creepy in your interest in Fanny Price. Back off! General Tilney, you’re a jerk. You may have thought Catherine an airhead but she wasn’t that far off the mark, despite her head being filled with gothic nonsense. Sir Walter Elliot, you’re just plain dumb, and you should listen to Anne for a change.

Weird. Verging on the monstrous, yes, I’m talking about you, Mr. Woodhouse. You’d only be happy if you could imprison your daughter for life in your fantasy world of fear, besieged by illness and bloodthirsty foxes. After all, the chickens may only have been the beginning… Two got away (one daughter and one governess) and you don’t want to let Emma go. In your way you’re almost as bad as General Tilney.

Mostly harmless. Only one comes to mind, The Rev. Moreland. (Can you think of any more?)

Do you have any fictitious fathers you love to hate or, gasp, even any favorite fathers in Austen or romance?

Great post, and you are right on with your assessment of Austen’s fictional fathers.

I will add to list with Dr. Gibson from Wives and Daughters. He mistrusted his sweet, innocent, loyal, loving Molly and married horrible Hyacinth, giving Molly a detestable step-mother and ruining his own peace and happiness.

I have a special place in my heart for Ben Page from Seeing Me Naked. He’s a big wig dad as in it means something to be his daughter and he’s very hard on his children. I completely understand this family/father because in my family it means something to be the daughter of my father and the granddaughter and the great granddaughter and so on and so forth. I thought Liza Palmer nailed this father even though he is by no means the perfect father. I remember being 10 years old and my father threatening to disinherit me if I didn’t become a famous author. 21 years later and I’m not a famous author although I’ve started a novel. And 21 years later and I still haven’t made him proud of me either. Fathers can be a tough crowd.

Jane, Wives and Daughters is one of my fav books. I think Mrs. Gaskell’s depiction of Mr G and Hyacinth is so brilliant and multifaceted that I can’t add him to the list! He’s basically a good man who’s lonely and gets out of his depth. I can even sympathize with Hyacinth to a certain extent–she’s terrified of poverty.

Interesting that you quote Katha Pollitt, as I knew her in college — one of the smartest people in a very smart crowd.

Just read Candice Proctor’s “September Moon”, which has a horrid father. Angus Davenport was a Victorian professor of classics who mostly ignored his daughter (even though she was smarter than most of his students) and left all his money to establish a series of lectures on Athenian life, thus leaving his only child essentially penniless. Of course, if she hadn’t had to work for a living she never would have met the hero, such being the way of romance novels. . . .

I always thought poor Dr. Gibson was just trying to do his best. He knew he wasn’t doing right by Molly, and he thought a mother would help. He just didn’t really *get* who he was marrying until it was too late.

As for fathers, my own is so wonderful that I have a really hard time writing bad ones. I need an autocratic, nasty-piece-of-work for the second League of Second Sons book. It was REALLY hard to keep him in character. He had to believe bone deep that everything and everyone exists to serve him, and after him, the heir. I really hate him.

I just finished Margaret McPhee’s Unlacing the Innocent Miss, which contained the father-in-law-from-Hell! Honestly, the worst father figure in fiction I have ever read. Totally full of himself and his sense of entitlement; he destroyed the heroine so much that she left her husband, never to return! Of course, the HEA comes when the hero chooses his wife over his father.

I remember an earlier discussion about romance novel mothers, and how few good ones there are. One of the reasons for this and the lack of good fathers, I think, is because it increases conflict. The hero/heroine may get more responsibility and make more mistakes (and more serious ones) because they don’t have the support of sensible and caring parents. They have to figure things out for themselves, which makes for a strong story.

I agree with Elena. There’s a reason parents in fiction are less than ideal.

Or they are dead. We also have lots of orphans as heroes and heroines.

While it’s true that the “less than ideal” flawed parents help create conflict in stories, in my opinion, ALL parents are less than ideal. We all have flaws that can lead to plot-worthy problems for our children. It’s more fun though when the flaws go hand-in-hand with some truly unique and/or annoying character traits. Austen does that very well, creating memorable characters that are funny but still believable. (Contrasted with Fanny Burney, whose memorable characters are fun but usually a bit over the top)
Great topic!