At last! I have internet again. I’ve not had access to internet since Sunday morning. I think I would have simply perished had I not been able to check email and such on my iphone. This has been hard.

I’ve also had a very busy few days so I hadn’t had the foresight to write a blog ahead of time.
But this trauma of not having access to the internet got me to thinking of communication during the Regency. 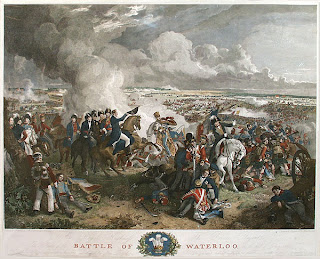 This past Saturday was the 196th anniversary of the Battle of Waterloo. I wondered how long it took for the folks back in London to learn of the battle and its outcome.
Wellington sent an official dispatch on June 19 and it arrive in London on June 21. The news was published as a London Gazette Extraordinary on June 22. Three days. And I can communicate with a blog in an instant (if the internet is working).
The news of Wellington’s victory at Waterloo did travel across the English Channel a bit faster than the official dispatch. The Rothschild family had several agents working on both sides of the line at Waterloo. By the afternoon of June 18, the Rothschild couriers boarded a chartered boat and brought the news of the victory to Nathan Rothschild two days before the official dispatch. The difference, you might say, between email and a text message. Or maybe between a blog and twitter.
By the way, the story that Rothschild used this prior knowledge to make a killing on the bond market, is not exactly truthful. Actually, Rothschild felt that the war would last a long time. The battle ending the war so quickly almost ruined the Rothschilds.
Has the internet (or any other kind of communication) failed you at an important time?
Thursday on Diane’s Blog, I’ll tell you what made my weekend so busy.
Posted in Uncategorized | Tagged Rothschilds, Waterloo | 3 Replies
0 0 votes
Article Rating
Subscribe
Login

I hate having problems with my internet. It has literally made me cry, on occasion. I love the prayer: God please bless my computer and the internet, because all my friends live there.

As to an important occasion, I didn’t unplug my computer during a thunderstorm, and the surge protector didn’t. Blew up the processor in my computer and fried my modem. It was a week before I had a new modem and a new computer. I cried every day. I work at home as a medical transcriptionist, with a 24-hour turn around. I wisely kept my old computer and was able to use it to stay on top of my work, but it was painful because it hadn’t been updated with any new words or addresses in over a year and a half. I was crying because I was afraid I’d lose my job because of a spelling error. Yes, one of the clients was that picky. I had a whole new appreciation for my new computer and modem.

So glad your internet is back!! WHOOHOO!!

I have not been able to get on line either because we are traveling or our service is down. In a way it bothers me how tied to it we all seem to have become. I would certainly be getting more sleep and more done if I didn’t have it. I would also miss all those blogs i follow and the research links they give. Thankfully, I no longer need it for a job.

With current events in the news, maybe this age of being able to instantly communicate isn’t such a great thing. People seems to be forgetting to engage their brains before engaging the internet.

Judy, it is worse to have your work dependent on the computer! And to lose the whole computer. Yikes.

librarypat, I could say the same about more sleep and more done…and about missing all my internet friends.