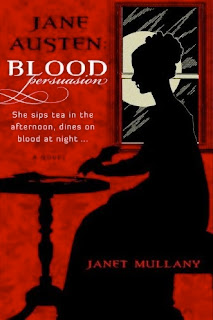 My next book, the second about Jane Austen as a (part-time/temporary) vampire, Jane Austen: Blood Persuasion, is released in October, 2011 and I thought you’d like to see the beauteous cover. I love it! Note the bat-shaped pen and Jane’s fang.

It’s set in 1810, when Jane, with her mother, sister and best friend are living in Chawton and Jane is about to get down to some serious writing. But then, as so often happens in Austen’s own novels, new tenants lease Chawton Great House, owned by one of Jane’s brothers.

Here’s the beginning of the book:

Jane watched in fascination as the girl in question, her niece Anna, pulled a hideous face at her father, an expression that lasted only a second before her pretty face resumed its normal sweetness.

“Come, brother, you’d rather have her commit folly at twenty-seven than seventeen?”

“I was sixteen when it started, Aunt Jane,” Anna said.

“Indeed, a whole year of foolishness.” James stood as his mother entered the drawing room. “How goes the garden, ma’am? I have brought you some cuttings; your garden boy has them.”

“You did? Heavens, he’ll probably kill them by looking at them. What possessed your brother to send me that boy I cannot imagine. He’s all thumbs and none of them green. Come now, James, give your old mother a kiss. And you, too, Miss Anna, you must help me in the garden.”

James frowned at the display of affection between Mrs. Austen and her granddaughter. “She is here to reflect upon her foolishness and inconstancy, ma’am, not to enjoy herself.”

“Oh, of course,” Jane murmured. “But you hate gardening, do you not, Anna? And going for walks, and playing upon the pianoforte, and talking nonsense, and reading novels, for that is all we do here, I fear.”

“Hmm.” As James spoke Jane saw a quick glance of affection between father and daughter, quickly masked. “I had in mind some improving literature and early nights.”

“Naturally. Bread and water we can supply too, James. Never fear. We shall be the consummate jailers.”

“Oh, stop talking nonsense and make tea for us, Jane.” Mrs. Austen removed the wide-brimmed, unfashionable straw hat she wore for gardening. “We shall keep Anna busy, you may be assured, and fortunately there are no eligible bachelors in Chawton.”

“Indeed, yes,” Jane said, measuring tea into the teapot. “For Mr. Papillon is destined for me, you know. If you set your cap at him I shall be most displeased, Anna, and send you packing off home to Steventon again.”

“Really? You have a beau, Aunt Jane?”

“Your aunt is funning you.” James, softening a little, winked at his sister. “How goes the scribbling, Jenny?”

“Fair enough. Gallons of ink, acres of paper, and every morning my sister and mother and Martha have to wade through my torn out hair a foot deep on the dining room floor. I thank you for asking, brother.”

“I’m not so sure it wasn’t novels that caused all this trouble in the first place,” James said. “They contain much romantic silliness.”

“Oh, heaven forbid we should act as rational creatures,” Jane said. “Do you think we do not know the difference between fact and fiction, James? That all we read in novels is but a fantasy of the life we lead, and we such poor creatures we cannot tell the difference? And,” she added, “mine don’t contain romantic silliness. Silliness, possibly. Romance, possibly. But the two together? Impossible.”

Enjoy and hope to see many of you in NYC next week!

Ooh, Janet, your new cover is even more gorgeous than the last one.

great cover, I agree totally. And your author voice is wonderful as always.

That cover is really striking!

Amazing cover, Janet, and I’m with Diane: Your voice is top notch. Can’t WAIT to read it!!

Great cover, Janet, and I love your excerpt.

Hi everyone–it’s not technically a mashup, @librarypat, since it’s not based on an Austen novel. It’s more a vamp fantasy based extremely loosely on Austen’s life with the premise that vamps are out and visible in English society.

Fabulous cover, Janet! I’m really looking forward to reading this one! As always your voice is delectable.