A part of me wishes I were still in NYC. I heard the Fourth of July fireworks there are going to be the best ever! But I was really tired after a week of RWA, where I had the very best time.

I hope you are all finding some fun place to celebrate our Nation’s birthday. It seems a little odd that I’m going to be spending my blog today talking about the Regency world instead of our founding fathers who declared Independence from the country in which all my books are set.
On Tuesday last week, I attended the Beau Monde Conference, a one-day event that took place before the actual Romance Writers conference. Mary Jo Putney opened the conference with a talk about her Regency writing career and her fondness for the time period.
Risky Janet gave a fascinating workshop on the Abolitionist movement in England. 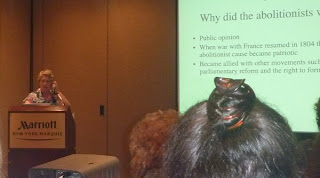 And my friend Victoria Hinshaw discussed the Battle of Waterloo through the reenactment she attended last year on the battle’s anniversary. 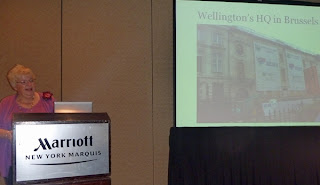 I had to miss the afternoon sessions, but I didn’t miss the Soiree 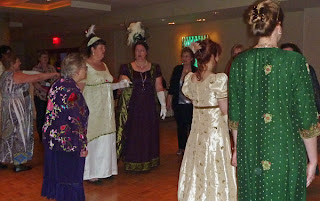 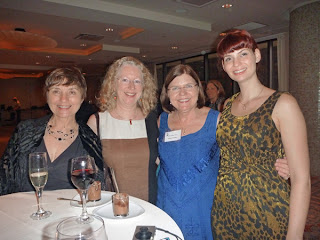 There were so many wonderful Regency costumes. I told everyone that I was dressed “Regencyesque.” My dress was long, but not exactly Regency.

I ran into Janet here and there during the conference, and I saw Megan enough to say hi to, but I only glimpsed Carolyn. She did look lovely presenting a RITA, though. I missed Amanda and thought of her often. We sent a photo of me and Andrea/Cara Elliot, I think. Things about the conference are already trying to blur.

Thursday at Diane’s Blog I‘ll talk about the rest of the conference and show some more photos. I have a new excerpt of Valiant Soldier, Beautiful Enemy at my website and some exciting new news and a new contest.

Tell us what you are doing this Fourth of July!!!
0 0 votes
Article Rating
Subscribe
Login

Welcome back, Diane. Thanks for the conference update! It really makes me hope I can go next year.

As for the 4th, I will be finishing laundry from last week’s vacation, mowing the lawn and regrouting a bathtub. Later we’ll have burgers followed by raspberry, blueberry and vanilla ice cream parfaits while watching whichever fireworks telecast has the best music. It may not sound exciting but it’s heaven to me. 🙂

I love your themed and colorful meals, Elena! And an indoor view of fireworks sounds ideal to me.

I was fortunate to be vacationing in NY the same week as the RWA convention, (and we stayed at the same hotel), so I thoroughly enjoyed getting the chance to meet so many wonderful authors at the Literacy Signing!

How fun!! Maybe next year. I look forward to your Thu post.

A friend challenged me to write my own Declaration of Independence, so I’ll be writing most of the day. It’s supposed to reach 108, today, so inside is a must. I do have hotdogs and a hamburger planned for meals. I’ll be watching the Capital fireworks on PBS. I’ve also made it a tradition to read the Declaration and the Constitution. Neither is very long. I also have a couple books on the signers and the wives of the signers, as well as the original Federalist papers. (Great for vocabulary!) Better start the day.

Sounds like another wonderful RWA National! If you’d stayed, you’d be seeing the fireworks tonight along with my daughter, who’ll be watching them from the bay window in her dorm suite on the 18th flr of the Rose Building on 65th across from Lincoln Center. Lucky girl.

I’m going to be here at my keyboard, getting words down and ignoring the boom-booms.

Joanne, what great timing that was for you! Even staying in the same hotel.

Oh, Judy, I would love it if you could get to RWA next year. And I love that you are rereading the Declaration of Independence and Constitution

Jane George, How very exciting for your daughter. I envy her!

I believe that is the back of my head in your photo of Janet’s wonderful workshop, O Divine One! I thoroughly enjoyed her workshop and the wonderful Waterloo workshop as well.

The soiree was fun, especially seeing everyone in their Regency (or Regencyesque) dresses.

And I did manage to snag one of the lovely fashion prints in the silent auction in spite of the fact an extremely fabulous historical romance author outbid me on another one. 🙂 And the Napoleon and the Empire of Fashion book is AMAZING !!! Won that at the auction as well.

Missed you and Amanda at the conference, Elena! And I hope to see you both (as well as the other Riskies) in California!

Oh, I missed being there so much!! But my Soiree gown will keep until next year…

Can’t wait to see it, Amanda !! You were sorely missed!

Went to our daughter’s annual 4th of July picnic. It was a bit smaller than usual. Her baby is not quite 3 weeks old, so things were scaled back a bit. She lives about an hour away and both her sister and her family and her brother were able to make it up. Was nice since so often our son doesn’t make it.

We got home early enough to watch the different fireworks displays on TV.

Louisa, that was indeed your head and such a lovely head it was. I forgot all about winning the fashion print!! And I just outbid you, because you were way over extended–had your name on EVERYTHING of value!!!!!

Amanda, It was not the same without you.

Librarypat, sounds like a lovely July 4th. How can it not be with a new member of the family present?

We had a friend over for dinner so had a little bit of celebration. Drank champagne.