Last week, I went to a follow-up appointment with the surgeon, and one of the things I had to do was fill out a post-op questionnaire all about how I’m doing since I came home. One of the questions asked if the patient was suffering feelings of depression, and I realized something very important–I’ve actually been feeling very happy, eager to go out and have fun even. I guess a near-brush with disaster will do that, or maybe it’s a compensation for missing out on RWA, lol. But it led me to do something I always said I would never, ever do–sing karaoke. It was a friend’s birthday party Saturday, and well, one thing led to another, and next thing I knew I was singing “California Gurls.” Keep in mind that I have a terrible singing voice and am very sensitive about it, but when it was all over I realized it was actually kinda fun. Liberating.

So now I am on a “Make The Most Of Life” campaign. Every week I am going to try something new, just to help me remember life should be an adventure. I will post what I find to do (as long as it’s PG-rated…)

And when I was looking for topics for today’s post I found out that July 12 is an anniversary for one of my very favorite Bold Women in history–Dolley Madison, First Lady of the US from 1809 to 1817, who died on that day in 1849 after a long and very eventful life. She seemed appropriate to talk about today. I first “met” Dolley when we got an assignment to do a report on a figure in American history in the 5th grade. I found a book about her in the school library and loved her immediately! She was all the things I wished I could be. 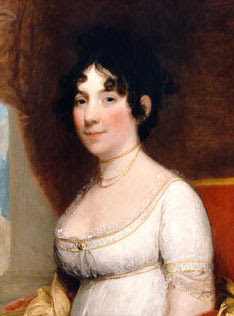 She was born Dolley Payne into the Quaker Payne family on May 20, 1768, one of 8 children, and grew up in Virginia until 1783 when her family sold the family slaves and moved them to Philadelphia, where his business promptly failed and he died in 1792, leaving Dolley’s mother to run a boarding house to take care of the family. She married lawyer John Todd in 1790 and had two sons with him, but he and their younger child died in a yellow fever epidemic only 3 years later. In May 1794 she met James Madison, who had been admiring her from a distance, through their mutual friend Aaron Burr. At first glance they were a strange couple. James was 17 years her senior, a longtime bachelor, short and quiet, while Dolley was tall, buxom, and supremely outgoing, but they fell in love and were married in September of that year. She was then cast out of the Quaker church, which freed her to pursue her love of the latest fashions (especially elaborate hats and turbans!)

In 1797, James retired from the House of Representatives and took Dolley and her son to live at his home at Montpelier in Virginia, where they planned to live a quiet, private life. Fate intervened when Thomas Jefferson asked James to be his Secretary of State in 1801 and the family moved to the brand-new capital Washington DC. James became the 4th president in 1809, and Dolley really came into her own. She was a great First Lady, known for being very fashionable and giving fabulous parties. She redecorated the White House to reflect its stature, and was also very intelligent, shrewd, and charming, renowned for her ability to bring quarreling factions together and smooth quarrels at a very hotheaded time. (Too bad we don’t have her around now…)

Her most famous moment came during the War of 1812, as the British Army converged on DC and the populace fled. Alone at the White House, Dolley packed up vital papers and insisted on making sure the famous Gilbert Stuart portrait of George Washington was saved before she left for safety herself. As she later wrote to her sister, “Our kind friend Mr. Carroll has come to hasten my departure, and in a very bad humor with me, because I insist on waiting until the large picture of General Washington is secured, and it requires to be unscrewed from the wall. The process was found too tedious for these perilous moments; I have ordered the frame to be broken and the canvas taken out….. It is done, and the precious portrait placed in the hands of two gentlemen from New York for safe keeping. On handing the canvas to the gentlemen in question, Messrs. Barker and Depeyster, Mr. Sioussat cautioned them against rolling it up, saying that it would destroy the portrait. He was moved to this because Mr. Barker started to roll it up for greater convenience for carrying.”

And another account of her perilous journey, “The friends with Mrs. Madison hurried her away (her carriage being previously ready), and she, with many other families, retreated with the fleeing army. In Georgetown they perceived some men before them carrying off the picture of General Washington (the large one by Stewart), which with the plate was all that was saved out of the President’s house. Mrs. Madison lost all her own property. Mrs. Madison slept that night in the encampment, a guard being placed round her tent; the next day she crossed into Virginia, where she remained until Sunday, when she returned to meet her husband.”

Amanda, I love the idea of your “Make the Most of My Life” campaign. Something like it is happening to me as I return to writing. Time is limited but I treasure it so much that I’m using it more wisely.

Thanks for the intro to Dolley Madison. Do you have a favorite bio of her?

Elena, I really like a new bio that came out a few years ago, “A Perfect Union: Dolley Madison and the Creation of the American Nation” by Catherine Allgor.

And I know just what you mean about writing time! Right now I have only a very limited time where I can both concentrate and sit at the computer before I have to go take a break, but I appreciate that time so much. Actually I appreciate everything, like a trip to Target! 🙂

Amanda and Elena, we should all take a lesson from you. Live life to the fullest, because you just never know what could happen.

Dolley Madison was a childhood favorite of mine, so much so, that I named my Jill dolls after her. My sister and friend Linda and I played out all these dramatic love stories with our dolls, usually based on our favorite TV stars of the time.

Amanda, have you seen the American Experience program on Dolley starring Eve Best? It’s really interesting. I’ve always loved Dolley Madison ever since I read about her running away from a burning White House with George Washington’s portrait. And she makes great cakes 🙂

Amanda, I adore Dolley Madison and second your choice of bios about her. I have that one on my kindle.

As for living life to its fullest I have recently had experiences with that and like Elena it deals with writing. I used to write all the time. I was constantly writing poetry, short stories, novels, plays and anything else I could think to write. Then because of some peer pressure and a horrible English professor in college I gave it up. Now that I am unemployed I’ve taken it back up again and I’ve never been happier.

I’ve discovered as you grow up you give up pieces of yourself for various reasons. I’m now working on getting those pieces back and I’m happier. Even though I just got a rejection letter for a job I really wanted (I came in second) it’s okay because something will come up. I’ve decided to start applying to jobs in the UK and Ireland because I’d love to live there. What have I got to lose? The worst they can say is no and I’ve heard that before and it hasn’t stopped me yet.

I guess there is something bigger and better out there or maybe and this is a far reaching maybe I’m meant to earn my living as an author and the powers that be want to give me plenty of time to finish my novel.

Life is a banquet and most poor suckers are starving to death. Live! Live! Live!!

Or that’s what I say.

What a great way to come back from your scary adventure, Amanda! As I often say “This is NOT a dress rehearsal!” Taking up writing again at the age of 48 was a bit daunting but now I see it as a race to get all of my stories on written before that last big THE END !!

I admire Dolley Madison a great deal, but one of my favorite powerful women is Abigail Addams – wife of one president and mother of another. She truly was an amazing woman.

Than again, I see a lot of amazing women right here on this blog!

“My sister and friend Linda and I played out all these dramatic love stories with our dolls, usually based on our favorite TV stars of the time.”

LOL Diane!! I’m sure Dolley would love it. 🙂

Louisa, I also really love Abigail Adams. I have been reading a lot of history books since I got home, taking inspiration from lives like that and trying to see how I want to move forward now…

me too having inspirations from historical bold women