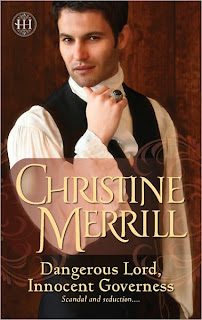 “Dangerous Lord, Innocent Governess was an entertaining historical romance with a gothic touch, a plot with some twists and turns and a nice romance…”–The Bookaholic Cat
“I enjoyed this book…It was sexy, dark and satisfying. 4 stars.”–Red Hot Books

Christine will give away one copy of Dangerous Lord, Innocent Governess and one copy of Lady Drusilla’s Road to Ruin to two lucky commenters chosen at random.

Welcome, Christine! Tell us about Dangerous Lord, Innocent Governess.
In Miss Winthorpe’s Elopement, my hero, Adam, had an unfortunate past with his best friend Tim’s wife. I think I had half a plan that Tim and Claire would rekindle their relationship in a second book and live happily ever after. But the more I learned about her, the more natural it seemed for her to die in a mysterious fall down the stairs, and for Tim to be the prime suspect in her murder.

Daphne is Claire’s cousin, and was one of the few people who was genuinely fond of her. She insinuates herself into the household to find out the truth. But she doesn’t count on having real feelings for the children she’s pretending to care for, or her attraction to Tim.
What captivated you most about this story?
I wanted to do a Gothic, with a governess heroine and a brooding hero. And if possible I wanted to work in as many of the old conventions, with Daphne sneaking around an old dark house, barefoot and in a nightgown, in the thrall of a hero who might kiss or kill her. But I wanted a heroine who wasn’t quite as spineless as the ones I remember from my youthful reading. I was plotting it out about six months before I could work it into the writing schedule, and had a lot of fun creating my version of the stories I read back in the 70’s.
What is Risky about Dangerous Lord, Innocent Governess?
It’s really a pretty dark story, and the characters are not always likeable. I know that Tim Colton has a marshmallow center, and loves his kids. But he’s pretty messed up through most of the book, bitter, suicidal, and definitely capable of murder. Although Daphne grows to be a better woman by the end of the book, she’s been listening to the advice given by the faithless Claire, and begins as a shallow, willful brat. The first love scene between them can hardly be called that. But I don’t think either one of them is capable of love at that point.
Did you discover anything interesting when you were researching the story?
My hero is a botanist, and I assumed he would have his own glass house. But I wasn’t totally sure what that entailed, or what would be grown there. I learned that English gardening was a pretty sophisticated pastime, with fruits forced out of season, all the way back in the time of Queen Elizabeth I. John Nash, a popular architect of the Regency period, did some very nice conservatories and orangeries and Thomas Hopper redid the conservatory at Carlton house.
Tim Colton’s imaginary glass house is a bit more functional then that. But it would have had a glass ceiling and some very nice cast iron columns to support the windows.

I understand you also have a book out this month in the Uk. Tell us about that one.
This month’s UK book is Lady Drusilla’s Road to Ruin. It’s the second book in the Ladies in Disgrace trilogy which will be out in the US in spring of next year. John Hendricks was personal secretary to the hero in the first book, Lady Folbroke’s Delicious Deception, and he’s leaving London broken hearted, drunk and unemployed.
Drusilla is headed north on same the mail coach, trying to rescue her little sister from a disastrous elopement with a dancing master. When she hires John to help her, she learns how much fun it can be to lose one’s reputation on the road to Gretna Green.
What is next for you?
I’ve just started working on a new book with an actor hero. Jack, who is a bit of a con man, is pretending to be a member of the nobility, trying to marry an heiress for her money. He ends up with Cynthia, who thinks she is tricking him into marriage and is trying to get his nonexistent fortune.
They end up joining forces against common enemies, and repairing the fortunes of both their families by any conniving and underhanded means possible. They are both totally devious. I think they make a lovely couple.

Anyone still have a taste for Gothics? Do you have a favorite? And what can be done to buck up all those too stupid to live Gothic heroines of the 70’s?

I’d love to read a Gothic romance! And this one sounds like it’s right up my alley.

Welcome to the Riskies, Christine. I devoured Victoria Holt and Phyllis Whitney in their day. And I love governess stories.

One of the highlights of RWA: meeting Christine, who (whom?) I have been cyber-stalking for years. I was lucky enough to bid on all these books in an auction and have read (no, devoured) them already, so I don’t need to be entered.Congratulations on all the releases, and please keep writing!

I look forward to reading “Dangerous Lord, Innocent Governess.” I’m intrigued by the concept of a hero who’s a little bit dark and not always likeable. I recently reread “Jane Eyre” and that’s what made Rochester so compelling. He deceived the heroine and even tried to trick her into committing bigamy. Yet in the end, it was about grand passion and, like Jane, we also fall in love with him. I look forward to falling for Tim!

This book looks so good. I came across it a few weeks ago and instantly added it to my wish list. I can’t wait to get my hands on a copy.

I love the governess theme.

I do still occasionally read a Gothic romance, they’re always fun. I guess the too stupid to live Gothic heroines need to stick up for themselves a bit more. I always like it when the heroine figures out a way to escape the nasty kidnapper on her own and helps rescue the hero as well. Just read a story like that the other day, it was great.

Christine, I am a big fan of your books! I have Dangerous Lord, Innocent Governess (a signed copy mind you!) tempting me from the top of the TBR stack I brought back from New York!

I have always had a soft spot for those Gothic romances with the governess and the brooding lord and master since the first time I read Jane Eyre.

My second manuscript, The Raven’s Heart, is a Gothic governess story complete with ghost, murdered first wife and a child who refuses to speak. I will say that my heroine is far more proactive than some of the ones I read (and loved!) by Victoria Holt and Phyllis Whitney.

And you UK release sounds wonderful!

Ooh, enter me in the drawing! I’ve got a governess story percolating at the back of my brain and would love some inspiration. And I love the title!

I don’t think I have read any historical romances with a Gothic element to it so this definitely intrigues me. I’m used to witty, lighthearted Regency stories so I wonder what a Regency Gothicc romance will be like.

Welcome to Riskies, Christine! I loved those Gothic romances from the 70’s. Have always loved the books with the governess falling for the available Lord and vice versa Your books sound good. Please count me in!

Hi, everyone! Thanks for having me.

Did anyone grow up in a house full of Reader’s Digest condensed books? I think they had every Victoria Holt book ever.

And I love Jane Eyre. Or should I say, I love Mr. Rochester. And I do not hold that mad wife in the attic against him.

I am a lot less charitably disposed towards Heathcliff. I didn’t like him, or Cathy. They kind of deserve each other, in a really messed up sort of way.

Now, Max DeWinter from Rebecca? Sigh. Love him. I need to reread that book, I think.

I saw this one and instantly fell in love with the story line. It is my type of read and the cover is delish! Can’t wait to read it.

I haven’t read too many Gothics, but I do like ‘m.

Although Northanger Abbey isn’t my fav book of J.A, I like the excitement. The unknown and the “fear” the Heroine is experiencing. But she was a little too young, naive and lacking in innitiative for my taste.

Your version of a Gothis sounds very nice! Love the greenhouse idea.