Happy Tuesday, everyone! I hope everyone is enjoying their summer. Here we are now in Day 27 of 100+ temps, so I am staying in the AC and drinking lots and lots of iced tea. But I’m also on my “try new things” campaign, which meant I went out on a date with a new man last night (definitely something different!) and am going back to yoga class today for the first time since the surgery. Every day feels more and more “normal” again, and I love it. I’m also on a blog tour with authors Paula Quinn and Sue-Ellen Welfonder (look at my blog for dates–lots and lots of giveaways!)

While I’m trying to stay cool, I’m also making my way through a huge TBR pile of both fiction and non-fiction. One of the books I forgot I bought is Jonathan Downs’s Discovery at Rosetta: The Stone That Unlocked the Mysteries of Ancient Egypt. If you’re read some of my posts here, or my “Muses of Mayfair” series, you know I’m fascinated by archaeology and ancient myths, so I happily settled down to read this last week. And I found out July 19 is the anniversary of the discovery of the Rosetta Stone…. 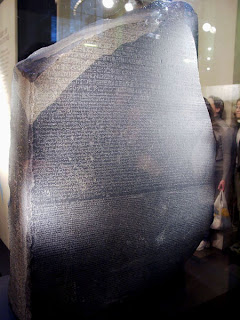 The Rosetta Stone is a pretty dull-looking black granite stele inscribed with a decree issued by Ptolemy V in 196 BC, but it’s inconspicuous appearance belies its enormous importance–since it’s inscribed with the decree in 3 different scripts (ancient Egyptian hieroglyphs, demotic script, and ancient Greek) it was the key to beginning to understand hieroglyphs, which had been a mystery before that.

Originally displayed in a temple, it eventually found itself part of the building materials of Fort Julien near Rashid (Rosetta), where it was discovered by a French soldier in 1799. Luckily Napoleon had taken not only military to Egypt, but a group of 167 scholars and experts known as the Comission des Sciences des Arts to study the history and culture of the region. (This group had a long and colorful experience in Egypt, but that’s another story…). The stone fell into British hands in 1801 and has been in the British Museum since 1802. The first translation of the Greek text appeared in 1803, but it was 20 years before Jean-Francois Champollion announced the initial decipherment of the hieroglyphs. Like many objects, it’s a source of conflict to this day…

For more information, you can visit the Britsh Museum’s site (but I warn you–this site can be a total time suck!)
What are some of your favorite things you’ve come across in museums? How are you staying out of the heat this summer??

I have no idea why or what the rhyme or reason is, but when I was 15 I went to Dayton, OH to see a Degas exhibit. It was a gifted trip for school with a bunch of different school districts. There were these two guys from another school district and they were making fun of this painting by Fyt called “Still Life With Fish”. I ended up dating one of the guys for a bit. But Fyt has become a favorite even though I have only ever seen that one painting and can find very little about the mysterious Fyt. Maybe I should google search again since I haven’t for years. But it’s fun.

I love exploring museums and while most people go searching for the big name piece that Rosetta Stone or the Mona Lisa, I prefer to find a strange painting or object. Something stuffed in a corner that has no friends or followings and love to latch on to it. Perhaps it’s silly, but it makes it feel like it’s my painting or my object because just the two of us knows about it and admire it.

I remember being awed by seeing the Rosetta Stone in the George III Library in the British Museum, but the bust of Clytie truly mesmerized me there.

Artie Mesia, now I’ll have to look up Fyt!

“I prefer to find a strange painting or object. Something stuffed in a corner that has no friends or followings and love to latch on to it”

I agree–that is one of the BEST things in a museum! 🙂 I love feeling like I’ve found something special and secret…

Glad you are truly on the mend and being adventurous!

I remember seeing the Rosetta Stone and being mesmerized by it.

But I felt the same way when I visited the Van Gogh museum in Amsterdam. I was not quite 30 years old and I had studied his paintings in books and in reproductions, but to stand in front of the actual painting ‘Sunflowers’ and ‘Irises’ was an amazing experience.

And I experienced true awe when I walked into the room in the Rijksmuseum and saw Rembrandt’s The Night Watch for the first time. I never expected it to be so huge and so overwhelming.

There is an aviation museum in the Dallas-Fort Worth, Texas area that held many surprises. THE FRONTIERS OF FLIGHT MUSEUM has some unexpected treasures. They have items from the Hindenburg, the first pilots license issued (I think), planes from all eras. It is a fascinating place to walk through with surprising discovers where ever you turn.

The Rosetta Stone has long been on my list of must see items. Some day, I hope.

I envy you the heat!
It is rainy and cold in Northumberland. We have not had a proper summer at all.

There was a very good BBC programme on how Egyptian heirogylphics were decoded a few years back. Absolutely fascinating stuff.