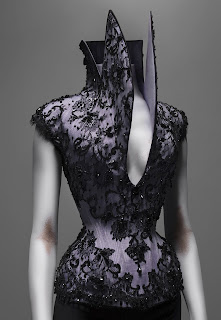 One of the reasons many of us love the Regency period so much is the clothing; the Georgian period, which preceded it, was often ridiculously overwrought, with men wearing red heels and patches and powder, and women wearing oversized, silly hats and wigs. 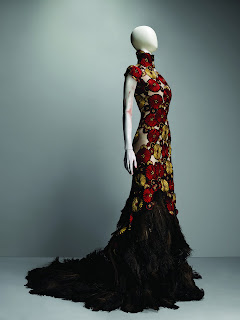 I am hoping to make it to the Met to see the Alexander McQueen exhibit. It shuts soon, and I’m mortified I haven’t made it there yet. So I went looking at the website, and found some gorgeous designs, which I’ll share. 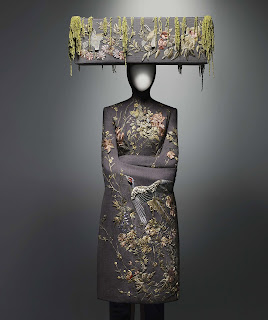 I haven’t been following fashion much lately–my son is, well, male, and he hasn’t gotten beyond manga t-shirts and jeans yet; my husband is a dandy, but he manages to stay on top of trends quite well without me. I did go out last night to see live music, and there were many twenty-somethings decked out in their glory; it was funny to see some of the fashion I wore as a high schooler thirty years later (yikes!).

I’d heard, and accepted, that McQueen was a fashion genius, but until I scrolled through some of these images I didn’t actually know. I will try to get to the Met soon, and meanwhile, do you have a favorite designer? Or a favorite look of these three?

I’m going to the Met on Sunday, I hope. Can’t wait! Love these weird and gorgeous clothes. I’m in NYC to read at Lady Jane’s Salon on Monday and intend to Do Stuff.

I’m going to try and go on Sunday when the Museum first opens so that I don’t have to elbow people aside to see the dresses.

Have a great time at The Met.

I really like Nanette Lepore, she either hits it out of the ballpark for me or makes me say, “Instant Goodwill item.”

Love her pieces or hate them, I can’t afford them. But it’s fun to look.

Thanks for the images, Megan! I was planning to see this exhibit while at RWA and was so sad to miss it. There is a red feather-y McQueen dress that lives in my dreams….

I almost got to the McQueen exhibit when I was in NYC. Sigh!

The crowds are impressive both in size and for the various styles in them. But I wouldn’t worry about what to wear, the exhibits will be the best dressed people in the room. I do suggest sensible shoes, it’s likely some toes will get stepped on. Near the end of the show there is an excellent hologram.

Love the read and black dress, but the one with the lethal looking neckline is gorgeous too!

Wish I could see the exhibit!

The fabric in the black design is lovely, but the collar is a bit too much. Of the three, the red one with the black feather lower skirt would be my favorite. I don’t follow fashion and am not familiar with the work of very many designers. There are names I recognize, but except for Vera Wang, none are current.

Wish I could get to NYC. This looks like a most interesting exhibit. They are really works of design art more than clothing. Except for the read dress, where would you wear these, except on the runway? Thanks for the pictures and the information on the exhibit.