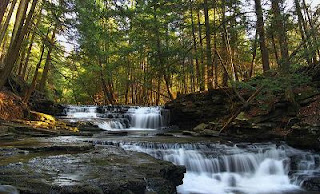 This weekend I’m taking the kids to Salt Springs State Park for a church group camping weekend. Hopefully we will have good weather, but if it’s hot we can always wallow in the creek.

My family used to go camping every summer, usually in Canada, so we have a lot of camping anecdotes. My favorite is when my brother and I went out to play and brought a pair of baby black bear cubs back to camp. We were very young at the time, as were the cubs. They returned to their mother when she showed up and the family just left. Black bears aren’t typically dangerous but we were still fortunate that this mother didn’t become aggressive.

I’ve never read of anybody camping in the Regency for fun. The Regency characters we read about that might have camped are our Napoleonic War veterans. Here’s a picture from The Wheatley Diary. The caption says “two blankets thrown over a stick was our house.”
At some point they had better tents, but they still weren’t nearly as good as the ones we use today.

Here’s an account of the conditions from “Adventures in the Rifle Brigade” by John Kincaid.

“Encamped on the face of La Rhune, we remained a whole month idle spectators of their (the enemy’s) preparations, and dearly longing for the day that should afford us an opportunity of penetrating into the more hospitable-looking low country beyond them; for the weather had become excessively cold, and our camp stood exposed to the utmost fury of the almost nightly tempest. Oft have I, in the middle of the night, awoke from a sound sleep, and found my tent on the point of disappearing into the air, like a balloon, and, leaving my warm blankets, been obliged to snatch the mallet, and rush out in the midst of a hail-storm, to peg it down. I think that I now see myself looking like one of those gay creatures of the elements who dwell (as Shakespeare has it) among the rainbows!

By way of contributing to the warmth of my tent, I dug a hole inside, which I arranged as a fireplace, carrying the smoke underneath the walls, and building a turf chimney outside. I was not long in proving the experiment, and, finding that it went exceedingly wekk, I was not a little vain of the invention. However, it came on to rain very hard while I was dining at a neighboring tent, and on my return to my own, I found the fire not only extinguished, but a fountain playing from the same place, up to the roof, watering my bed and baggage, and all sides of it, most refreshingly.”

Hopefully we will have a more comfortable time of it this weekend.

Do you enjoy camping? What is your most interesting camping anecdote?

Elena Greene grew up reading anything she could lay her hands on, including her mother's Georgette Heyer novels. She also enjoyed writing but decided to pursue a more practical career in software engineering. Fate intervened when she was sent on a three year international assignment to England, where she was inspired to start writing romances set in the Regency. Her books have won the National Readers' Choice Award, the Desert Rose Golden Quill and the Colorado Romance Writers' Award of Excellence. Her Super Regency, LADY DEARING'S MASQUERADE, won RT Book Club's award for Best Regency Romance of 2005 and made the Kindle Top 100 list in 2011. When not writing, Elena enjoys swimming, cooking, meditation, playing the piano, volunteer work and craft projects. She lives in upstate New York with her two daughters and more yarn, wire and beads than she would like to admit.
View all posts by Elena Greene →
This entry was posted in Jane Austen and tagged Adventures in the Rifle Brigade, camping, Jane Austen, John Kincaid, The Wheatley Diary. Bookmark the permalink.