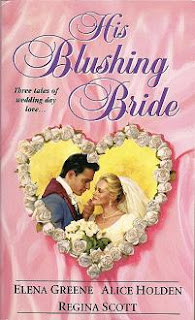 I’m not talking about the kind you wear. Not that I wear shorts myself. My knees have these ugly rough patches, so I only wear shorts for gardening–which is probably why I have those rough patches. But I digress.

Earlier this week Amanda said she liked shorter stories on these hot days of summer. I tend to read longer books in the summer, at least while on vacation, because that’s when I have more time. I prefer a longer, meatier read anyway, but I also enjoy the occasional anthology of novellas or short stories. I think they’re a great way to sample new authors.
They’re also fun to write. I’ve published one novella, “The Wedding Wager”, which came out in the Zebra anthology HIS BLUSHING BRIDE. Regina Scott, Alice Holden and I were asked to write novellas with a June Bride theme. I agreed to the deal, but I was determined not to do something all saccharine and Precious Moments with it. Luckily, I came up with the idea of a wager. The heroine, reluctant to accept the rakish hero’s proposal of a marriage of convenience, bets him that he won’t be able to resist so much as kissing another woman for three months. It’s silly and fun and I had a blast writing it. I think the other authors enjoyed writing their stories, because the anthology became an RT Top Pick.
How about you? Do you enjoy short stories and novellas, or do you prefer longer reads? Does it depend on the season?
In honor of the Riskies Anniversary, I’ll give away a copy of HIS BLUSHING BRIDE to a commenter chosen at random. I’ll announce the winner tomorrow.
Elena
www.elenagreene.com
0 0 votes
Article Rating
Subscribe
Login

I like reading short stories and novellas on my Kindle. Full-length novels are just too long for me to read on that thing; I prefer to read them in paper.

I also enjoy anthologies and finding new-to-me authors that way.

Lately, I’ve found myself preferring short stories and novellas. This is partly due to time constraints, but it’s mostly related to the writing. If I love an author’s writing, I’ll read reams and reams of it. Otherwise, I tend to read the first three or four chapters and skim most of the rest.

Interesting what you say about the Kindle, Sheree. I’m still dithering about which e-reader to buy, and one of the reasons I want one is to read long e-books. I can just barely manage short reads on my computer. I’m hoping I’ll be able to enjoy longer books on the Kindle (although being a skimmer, I really do prefer flipping back and forth in paper, sigh).

I do like short stories and anthologies — I’ve found several new authors when reading an anthology that includes one I know & like!
a PS to Barbara — download the software to your computer & do a test run .. maybe that will help the decision process – unless you have friends that already have different ones & would let you borrow..??

I like reading short stories but it also depends on how much reading time i have or the mood I am in at the time I start to read. I also enjoy the anthologies because it gives me a chance to try different authors.

I like the shorts for trying new authors. Sometimes I want a quick fix, and sometimes I want so savor a long story. The season does not matter to me, at all. Elena, your short sounds like fun.

The Blushing Bride sounds like a winner and I would love to read it.

Usually I read full-length novels but sometimes I do need a short and great story. I want all the things I like in a full-length novel: great chemistry, great characters and a cohesive story line but in a compact form. I can reach that HEA a little faster. I like anthologies as well because if the author(s) is new to me it’s a great way to try them out and have a feel for their voice.

Lately I’ve been enjoying short story collections. I find that when real life interferes and insists that I be productive I can still sneak in a novella story enjoying life at the same time.

Reading a short story or novella is my way of clearing my mind of the complexities of a longer book, kind of like drinking water after eating ice cream. I like the length because I can enjoy a quick read when I cannot sit down and get absorbed for hours. On the downside, I sometimes wish the story was longer and find myself hoping the writer will take the ideas in it and give me more!

I can only repeat what others have said: Sometimes I don’t have the patience or energy or time for a novel and a collection of short stories is just what I need. Short stories are also a great way to discover a new author or check to see if the author who’s getting so much buzz is right for you. And the Signet Regency Christmas story collection used to be a highlight of my reading year — I miss it.

Novellas are a great read when I am at work. I can read them on my two breaks and at lunch and I can usually finish one by the end of the work day.

The rest of the time I prefer a longer novel so I can really settle in for an escape!

I collect Regency/historical Christmas anthologies and I always drag that collection out at Christmas to help me get in the holiday mood!

Elena –
I like both shoert stories and novella as well as full length novels no matter the season?

Since I always have a book with me whether to read on my lunch break at work or in a line at the grocery store, bank or at the docter’s office it just depends on what mood I’m in before I walk out the door!

I’ve also “meet” new authors and some out of my usually genre by buying a book that has s stories by “new to me” authors. It’s a great way to “try” an author I might otherwise not have picked up. One example is Improper Gentlemen because I love to read all of Maggie Robinson and Mia Marlowe’s books but I’ve never read anhything by Diane Whiteside before but I’m looking forward to find out more about her now.

Sorry I haven’t been available to chat much–lots of family stuff going on, fun but busy.

I’m glad everyone enjoys novellas, because they are fun to write too. 🙂

Barbara, I love my Kindle, but you have to be comfortable with buying from Kindle almost exclusively. And you may not be able to borrow from libraries.

I mostly prefer a longer story, as it has more depth and I just love to read so.. the more pages the merrier.

But occasionally I do read shorter stories combined in one volume and this is also a lot of fun. I guess I’m not that picky 😉

Sorry I missed this post yesterday. Anthologies are a favorite. I have a 4 shelf bookcase double shelved with just anthologies. Many I have read and can’t part with them. Often one of the stories is a keeper. A reread of a short story in an anthology is easier than a long book, so I am more likely to do it.

I’ll have to see if this one is buried on one of my shelves.