I just realized something this weekend–I have been writing now for ten years. Ten Years!!! How is that even possible? The time has just flown by, and it’s hard now to remember which story came in which year, but my first came out in 2001.

I wrote Her Kind of Man (which had a different working title then, but now I can’t remember what it was!) when I was in college. It was mostly an escape from writing term papers, and a challenge to myself to see if I could actually write a whole book. I had been reading romances since I was ten years old (getting started with Barbara Cartlands, a few Heyers, the old Sunfire YA historicals, stuff like that), so naturally I thought of writing a romance. This story was my first (and only!) Western, and I had no expectations of it beyond something fun to try. But then I happened to go to an RT convention with another romance-reading friend (with no idea of what to expect there, since I did not read the magazine at the time!), sat in on a workshop about how to submit manuscripts, met some editors, and decided to give it a try. It was bought by Kensington’s now-defunct Precious Gems line… 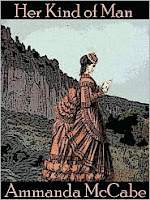 And now I can’t believe it has been that long. I’ve never looked at the story again–I am too scared, since it was my “learning book” (plus I never re-read my stuff when it’s an actual book and can’t be changed–too frustrating!), but if you’re curious it is no available as an ebook from Belgrave House.

What was the first book you ever wrote, or the first romance you ever read? (I’m pretty sure my “first” was Cartland’s Elizabethan Lover, where the heroine disguises herself as a boy and stows away on the hero’s ship as he sails off the New World. It was quickly followed by a Viking romance whose title has been lost to the mists of time…))

Congratulations on being a professional writer for 10 years. I have been an amateur writer for about fifty five, but most of my work was read by teachers, who insisted on me writing it, and my mother who was just curious to know what was going on in my head.

May you enjoy many more years of writing for pleasure and, dare I say it, profit.

Congratulations Ammanda!! I’m always eager to read your next book 🙂 That original manuscript should at least take you out for dinner and champagne!

Congratulations! 10 years, that’s amazing. The first book I ever wrote remains unpublished alas. It was called The Bachelor and the Babysitter. The first romance I remember reading was a Harlequin Presents.

My first book was Lord Langdon’s Kiss, which came out in 2000, so we are nearly the same age in author years.

The first romance I read was undoubtedly a Georgette Heyer, because I got in trouble with a nun for having one in my backpack at elementary school, LOL.

Congratulations, such a long time!!!

Wow, Amanda. Ten years. I think we first met after your first Regency, so it is nearly a decade anniversary for our friendship, too.

I’m sure you have decades more stories to tell!

My first book was written in 1995 and 96 (it went through several rewrites) – a romantic suspense that is probably horribly written, but I still like the story.

I can’t remember what Romance I first read. It was probably Rosemary Rogers’ Wicked Loving Lies

Isobel, I remember reading “Fires of Winter” and thinking maybe I had made a mistake in this romance-reading thing–luckily I found books more to my taste after that. :))

Thanks so much for the anniversary congrats, everyone! I still can’t believe it’s been that long…

Happy 10th Anniversary, Amanda! You’ve have accomplished quite a bit in those ten years, my dear!

The first romance novel I ever read was Pride and Prejudice. I read it when I was nine years old.

And that was the same year I started my first book. It took me three years to finish and it remains 800 pages of the worst purple prose drivel ever created. It was a western historical romance with a half-breed Sioux hero and a general’s daughter heroine. My mother has the only copy in her possession and refuses to let me destroy it. I will not tell you the title as Amanda is recovering from surgery and laughing that long and loudly could prompt a relapse!

Wow, ten years is seriously impressive, but not nearly as impressive as being published so young. Major congrats.

My first romance (apart from Jane Austen) was Heyer’s These Old Shades and I think I read Winston Graham’s Poldark series around the same time (and so wanted to be Demelza).

My first book, I wrote when working in IT. A modern romance about a Scottish lass who grew prize orchids and it was so bad that I can’t even remember what the hero did, except they kissed in the potting shed. M&B didn’t want to know, funnily enough!

Not a writer, just a reader! congrats on your career milestone! I’m pretty sure that Cartland was my first… I could depress you and tell you how little books cost those days!! something like 75 cents…

The first romance I read was Julie Garwood’s THE PRIZE. I was immediately hooked on her and historical romance.
Congratulations on your 10th anniversary. I hope there are many more.