First, big news that Diane hinted at last week and that finally I found out about a day later. Jane and the Damned was picked as one of Booklist’s Top Ten Horror books of 2011. I’ve no idea who that Stephen King guy is or how he got on it. Here’s Booklist’s blurb:

Mullany rewrites history in more ways than one in this novel, which sets up Jane Austen as a vampire. A fast-paced adventure for those who don’t mind the vampire craze impinging upon historical events and beloved authors. 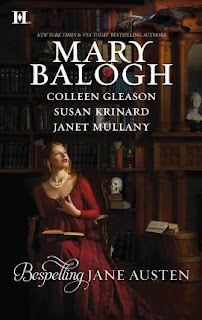 A mass market edition of Bespelling Jane Austen comes out September 27, available for preorder at Amazon or Bookdepository (where it’s on sale with free shipping worldwide). I really love this cover.

Other than that, the big news here is the earthquake and although I’m becoming anxious for another topic of conversation I did want to talk about it a little. However I think the next topic of conversation will be the storm of the century, year, month, or even week–as the Washington Post eloquently predicts it will be “dumping inches of rain.” I love that precision. Inches, eh. Two inches? Six? I guess wet is wet.

But what I found really interesting was the reaction of people to it, what they felt and heard. I was at work. My office is about three blocks from the White House, so we tend to get rather nervous about the unexpected, particularly on fine autumnal days. My experience was this: there was a tremendously loud bang and a jolt. I noticed my legs were shaking. Much later I realized that it wasn’t my legs. My first thought was that a truck had smashed into our building but we could see nothing outside. Then we noticed everyone else was leaving the building. So we did too. Wrong! Bits n pieces could fall on your head. They didn’t. 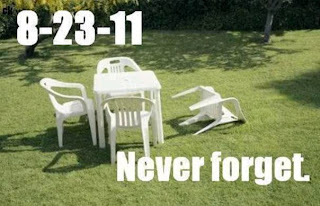 So we hung around outside and enjoyed the sunshine. Everyone was on their cell and, naturally, posting to FB. By then we’d figured out it was an earthquake although the only one I’d experienced before was much quieter. After a while our boss ushered us back inside and sent an email that the next time it happened we should huddle with him beneath a table (no thanks).

And that was it. I can’t say I was scared particularly but a lot of people who experienced more dramatic shaking and swaying of their locations were; I was on the second floor of a fairly solid 1930s building. Everyone’s perception of the event was different and everyone’s story of it is changing and will change.

And that’s pretty much what happens when you take on one of the beloved tropes of mass market fiction and make it your own–do it well, and it will change.

In preparation for the rigors of the weekend I went to the library to pick up some reading material in case the power goes out–this is my version of emergency preparedness, folks–and left with that special warm glow you get for paying your fines up to date.

My emergency reading matter–other than a kindle full of Austen–are books I’ve been meaning to get to for some time, so they constitute some sort of guilty pleasure wishlist: Faithful Place by Tana French, North by Northanger by Carrie Bebris (love that title! And I’m meeting her at the JASNA conference in October) and Fly Away Home by Jennifer Weiner.

Woot!!! That is great news, Janet!

You mention you thought maybe a truck had smashed into the building – that was exactly what I thought when I experienced my first earthquake, and in fact it seems to be a common reaction to short, sharp quakes.

LOL–I LOVE that lawn furniture pic. 🙂 And I love the Gothic-y new cover too…

And that cover is GORGEOUS! Very Gothicky! (Is that a word?)

My brother sent me the lawn chair photo. He really is terrible!

Glad you weren’t injured in the quake. Saw the photos of the Nationals Cathedral and it made me sad. It is such a lovely building.

Well, I was one of those with a more dramatic earthquake story. What was frightening to me was the noise. I was at home in my suburban, aluminum siding house and I thought a tree fell on the house, but it sounded like the whole house was imploding. I abandoned my cats to their fate and ran outside. (they certainly huddled under tables or some place, because I couldn’t find them when I went back in. )

Congrats for the Booklist coup!!!!!! And for the lovely cover for Bespelling Jane.

My emergency preparedness is charging up my Kindle. I have a huge TBR pile in there.

OH and my emergency reading – all “dead tree” books :

Flowers from the Storm

Midnight in the Garden of Good and Evil

To Kill a Mockingbird

First off, congratulations on the great news about your book. I like the gothic feel of the cover for BESPELLING JANE.
The lawn furniture picture is too funny. Easy to laugh when it isn’t too serious.

I literally have a library at my house – over 40 over full bookcases and as many more books in boxes or piles waiting for their place on a shelf. I have so many books in my TBR mountain, that I would have no problem finding something to read.
I am a Red Cross disaster volunteer. Most keep a GO Bag with all you’ll need for 3 weeks if you get the call for deployment. Mine has about a dozen books in it. They are books I haven’t read and I am pretty sure will not be keepers. I’ll read them them then pass them around and leave them for the clients (victims).
Funny, but it was just mentioned a few weeks ago at a RC training that this area should prepare for an earthquake. Of course they were thinking of the New Madrid fault. If that one acts up, things could be serious indeed. it has the potential to be the most serious quake this country has seen.

Here in NE TN, we have had tornadoes, wind storms, some flooding, and the earthquake, although it was barely noticeable here. As of now, Irene should not be a problem. I do have a sister on the James River near Williamsburgh and a brother in South Lyme, CN. Both are preparing for the worst.

Congratulations on JANE AND THE DAMNED, Janet!

Supposedly some people in our area of upstate NY felt the tremors, but I didn’t feel anything.

Here’s hoping everyone makes it safely through Irene.