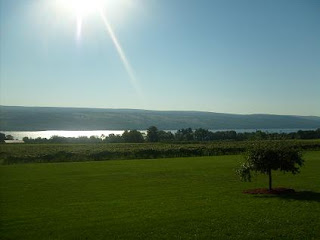 Earlier this week, I enjoyed an anniversary overnight with my husband in the Finger Lakes. Here’s the view from our room, across the vineyard and down to Seneca Lake. We had a lovely time and returned with two cases of wine. đź™‚

I’ve been visiting Finger Lakes wineries since my just-out-of-college days, when my wine knowledge was next to nil. I can honestly say that at most Finger Lakes wineries, there’s very little wine snobbery. Staff are friendly, happy to answer questions and help you discover what you like. I highly recommend taking a tour.

Finger Lakes winemakers have been working with reds for a while, with some success, but I still tend to prefer European reds. IMHO the Finger Lakes wineries are at their best with white wines. I love their Chardonnays and especially those that have undergone what is called “malalactic fermentation” which basically transforms fruity acidity to a rich, buttery acidity. Yum! Especially with rich seafood dishes. I’ve now tried Rieslings from other places and still think the Finger Lakes Rieslings are unmatched, as did Tim Patterson, a wine writer in Wines & Vines: â€śMy due diligence completed, there was only one rational conclusion: The distinctive character of Finger Lakes Riesling comes from where the grapes are grown. Itâ€™s the terroir, stupid. Thereâ€™s only one growing area on the planet (so far) that regularly yields the distinctive balance of acid, alcohol, and texture that marks this bounty from this part of Upstate New York.â€ť These Rieslings are full of flavor, great with many foods or by themselves.

But enough about what I like. What did they drink during the Regency? When I first started reading Georgette Heyer’s books, I hadn’t a clue as to what some of the wine terms meant. Here’s a rundown, since some of these terms are no longer in common use.

“Hock” refers to white wine from Germany; the term comes from the name of the town Hochheim in the Reingau region. “Claret” is red Bordeaux, from that region in France (blends which may include Cabernet Sauvignon, Merlot and other grapes). Burgundy was from Burgundy (made from blends including Pinot Noir), although now the term is sometimes used to denote a wine that may or may not be similar to the French wine. 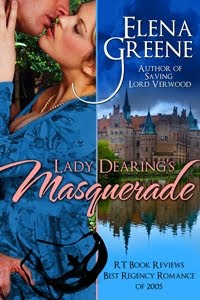 Regency characters might also drink fortified wines, with a high alcohol content because they have distilled alchohol added. These included Madeira (made in the Madeira Islands, part of Portugal), port (from Portugal) or sherry (from Spain).

I don’t know if homemade wines were commonly drunk by the haut ton, but the gentry made such wines based on fruits and herbs. There’s a recipe for “Mrs Fowle’s Orange Wine” in The Jane Austen Cookbook, by Maggie Black and Deirdre Le Faye. It would be an interesting experiment to try. I suspect the result was pretty strong, since the last steps involve adding brandy.

Do you enjoy wine and what are your favorites? Have you ever tried wine-making?

But before we chat, here are the winners of the LADY DEARING’S MASQUERADE Kindle ebook giveaway:

Congratulations! Please send your email and the email of a friend who you think might enjoy the Kindle ebook to elena @ elenagreene. com.

Elena Greene grew up reading anything she could lay her hands on, including her mother's Georgette Heyer novels. She also enjoyed writing but decided to pursue a more practical career in software engineering. Fate intervened when she was sent on a three year international assignment to England, where she was inspired to start writing romances set in the Regency. Her books have won the National Readers' Choice Award, the Desert Rose Golden Quill and the Colorado Romance Writers' Award of Excellence. Her Super Regency, LADY DEARING'S MASQUERADE, won RT Book Club's award for Best Regency Romance of 2005 and made the Kindle Top 100 list in 2011. When not writing, Elena enjoys swimming, cooking, meditation, playing the piano, volunteer work and craft projects. She lives in upstate New York with her two daughters and more yarn, wire and beads than she would like to admit.
View all posts by Elena Greene →
This entry was posted in Jane Austen and tagged burguny, claret, finger lakes, hock, Jane Austen, Lady Dearing's Masquerade, wine. Bookmark the permalink.

10 Responses to Wine and winners!