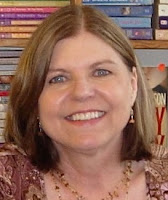 Today Carolyn interviews me about Valiant Soldier, Beautiful Enemy, the third and last book of my Three Soldiers series, out this month from Harlequin Historical.

Of course, it would have helped if I had remembered it before this very second, halfway through Sunday! 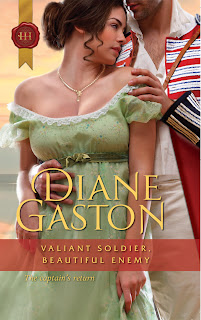 4.5 Stars “Valiant Soldier, Beautiful Enemy is a beautiful ending to this trilogy….Diane Gaston is truly gifted with her ability to create memorable, realistic characters that remain with us long after the story has been told.” — Debby, Cataromance

4 1/2 Stars “An insightful and refreshingly realistic romance set in the Napoleonic wars. This is a must read for those who enjoy Regency romances.” — Pauline, Bookaholics Romance Club

I’m giving away one signed copy of Valiant Soldier, Beautiful Enemy (or one download and a signed bookmark) to one lucky commenter, chosen at random! Because I’m late you’ll have until 12 midnight EDT tomorrow to comment.

Thanks so much, Carolyn, for having me here at the Riskies (Wait. I’m one of the Riskies…) Never mind. What shall I talk about?

1. First, tell us about your book.
Valiant Soldier, Beautiful Enemy, like the first two books in the series, begins with the same event during the pillaging of Badajoz that was experienced in different ways by each of the three soldiers. What the heroes of the first two books do not know is that meeting the French woman in Badajoz, was a pivotal moment for fellow soldier, Gabriel Deane. From his first glimpse of Emmaline Mableau during the carnage, Gabe knows he will do anything to keep her safe. When he finds her again in Brussels on the eve of the battle of Waterloo, their torrid affair makes Gabe dream for the first time of a home and a family. But Emmaline rejects his marriage proposal. Emmaline has made a difficult choice – marry Gabriel, the man she loves, or refuse him to help her war-traumatized, English-hating son. She chooses her son and Gabe turns back to the life of a soldier, where he believes he belongs. After the war, though, his regiment is disbanded. He is desperately trying to find another when Emmaline appears again, begging for his help. Will Gabe say yes and risk his heart one more time?

2. What’s the series about and can you tell us about your process for coming up with the idea?
The pivotal idea for the series was that the three British officers all witness one terrible event during Badajoz. That same event changes the course of each officer’s life and gives each story its villain.

I came up with the idea after watching the old Gary Cooper movie, The Lives of a Benghal Lancer. The idea of three soldiers bonding over their war experiences intrigued me.

3. Tell us something surprising or unexpected that you learned while you were researching this book.
I learned all about Cock Fighting! There’s a brief scene with a gamecock fight, so I had to learn all about it. I wrote about it in my Behind the Book article on my website.

I also learned the term “hill farm” to denote a Lancaster sheep farm.

4. What did Gabriel do when he got dumped? Did he 1) cry 2) drink 3) something else? If it’s something else, what was it?
Well, he didn’t cry! He’s a big, strong soldier. He did drink a lot, but not for long. Mostly he just wanted to be a soldier and hack at the enemy. Of course, there weren’t too many opportunities for him to do that after Waterloo.

5. Everyone knows that Risky Megan has this thing for Clive Owen while I am enamored of Arjun Rampal. So, if you were at a romantic spa (pretend you’re not married or otherwise in a committed relationship) and Clive and Arjun are both there and each one wants you to have a healthy smoothie with them (not a group smoothie thing) . . . then there’s this big fight over you with tables flying and fruit all over the place, it’s mayhem with a brief pause for song and dance, who wins the dance competition and what do you do afterward? I think you should probably keep the answer PG.
While these two inferior gentlemen are engaged in fruitless battle, the real man – Gerard Butler – steps in and rescues me. The rest is too PG-13 and R to explain.

6. Where can we go to read an excerpt, buy the book or just find out more?
Valiant Soldier, Beautiful Enemy is in bookstores all month and available online. You can read an excerpt at my website and find links to online vendors.

7. What’s next for you?
One thread I didn’t tie up at the end of the series was what happens to Emmaline’s son, the one who hates all Englishmen, including Gabriel Deane. He gets his own love story, an Undone ebook short story, The Liberation of Miss Finch. After living abroad for a decade, estranged from his mother, Leo Mableau returns to make amends and encounters the young woman for whom he’d had a doomed youthful infatuation. On the eve of her marriage to a man she does not love, she asks Leo to give her one last adventure — an erotic one.  The Liberation of Miss Finch will be available from ebook vendors October 1, 2011.

Don’t forget to comment to win a signed copy of Valiant Soldier, Beautiful Enemy.
What’s your answer to question number FIVE?
Do you like book series? How many books in a series is ideal? Does anything frustrate you about series?
0 0 votes
Article Rating
Subscribe
Login

Diane, I’ve been waiting for this book. I loved the earlier two books and can’t wait to read this one.

If you mean the answer to question *5* and not *4*, then mine is that I’ll ignore Owens and Rampal while they do their silly, brutish thing and wait for the true hero Richard Armitage to come swooping down in all elegance and state to carry me off.

Thanks, Keira! I fixed the numbering. I’m really out of it this weekend!

I’m just glad that Gerard is still MINE!!!!

“While these two inferior gentlemen are engaged in fruitless battle, the real man – Gerard Butler – steps in and rescues me. The rest is too PG-13 and R to explain.”

Saw that one coming from the start of the question. LOL!

And thank for answering my question about Miss Finch, et. al. I did wonder.

I love related series, provided each book features a different couple. Series that go on and on with the same couple, I find frustrating. It’s too much like a soap opera. I want to be able to enjoy my HEA, and then see old friends pop in when the new couple takes over.

I’m almost afraid to ask if you googled cockfighting and if so what actually came up. As a librarian sometimes google scares me.

You always have such beautiful covers Diane! I love the dress this heroine is wearing! I want it!

Have you heard of kindlegraph? http://kindlegraph.com/books
I know it’s only for kindle books, but for those of us who love you and buy you electronically you might want to check into it. (I have no idea how it works for authors, but I do have some kindlegraphs from authors I like).

Always a pleasure when you have a new book!

I have to agree with Diane, the real hero Gerard Butler steps in, wins the dance competition hands down and we stroll off into the sunset hand in hand for some more smoothies and a little snuggling.

Judy, I figured my choice would not surprise anyone.

Barbara, you and I might have to fight over Gerry!

Artie Mesia, I signed up for Kindlegraph…I think.

Or I didn’t sign up for Kindlegraph. I need to know more about this!

PS number 5 for me would be Tobias Menzies comes by and he takes me to London to be his bride.

Have this book sitting on my desk even as we speak and I cannot WAIT to read it!! I have SO enjoyed this wonderful series! I like a series and so long as the quality of the stories is the same or gets better and better I don’t care how long it lasts.

And I can sneak away with Colin Firth?

Diane, these books sound wonderful. I need to get this ms done so I can read romance again (can’t read and write it at the same time).

I adore series because it means I get to keep reading about my favourite characters and re-visit their world. Sometimes I never want a book to end, but that doesn’t mean I want a dragged out love story. I do want developments and changes throughout. Series can be frustrating when issues are overly dragged out, especially when it is obvious it needs to be resolved. I don’t have an ideal amount but I think if the characters have a story worth telling then it should, but not when a series is ongoing for series sake.

I love series. I don’t have a set number of books that a series should be. As long as the books are good, I am happy.

While those 2 guys are too busy to notice I exit quickly & bump into Edward Norton. Goodness this spa is full of celebs and even Edward seems interested in me. So after the smootie we go for a long walk in a beautiful garden, sit on a bench and hold hands. While drowning in each others eyes and leaning closer together…

I do enjoy a series. Three or Four is probably about the right length or else it will take years for them all to come out. I haven’t run across this series before so I have some catching up to do!

I think for most series three is about right. Any longer and it gets too easy to forget details. And, tiring to wait for the author to write.

I enjoyed the first two books of this series and am looking forward to reading this story.

And, as for question 5, since it’s a fantasy anyway, I’ll take Daniel Craig slipping in from a side door.

Hey! Colin Firth is MINE!! the rest of you just stay away!!