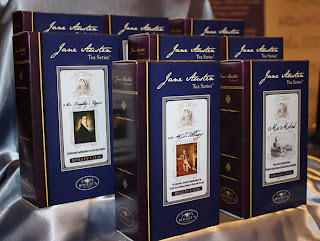 I am pleased to announce the winners of the Smelling Like Badgers Contest. As you may remember, I held a contest last week for suggestions for Regency pastimes that might suit the modern sensibility. The results were interesting and bizarre. Thanks for playing, everyone.

Lorraine, who suggested playing the bagpipes which is an image I can’t get out of my mind. Every time I return to my WIP I start thinking of a possible opportunity for someone to whip out a bagpipe.

Jane, who suggested a visit to the museum to ogle the nude male statues.

Lorraine and Jane, please visit Bingley’s Teas — I love their Jane Austen-inspired line, shown above, which are actually packaged to look like books and you’ll find all sorts of teas including herbal– and then email riskiesATyahooDOTcom with the blend you’d like and your snailmail. And I shall order forthwith!

Talking of Jane Austen, there’s a wonderful article, actually a review of two new books, in the Los Angeles Review of Books, Just Like A Woman. The books are Why Jane Austen? by Rachel M. Brownstein and William Deresiewicz’s A Jane Austen Education: How Six Novels Taught Me about Love, Friendship, and the Things that Really Matter. Have you read either of them? I really want to read Deresiewicz’s which is an account of how a guy learned to love Austen.

And finally in this post full of trivia–that, kittens and the obvious is what the internet is for–we’re now going to have some serious academic study. Translate:

It is of course Finnish for “She turned me into a frog” (or, as Google Translate quaintly puts it, “He moved me to a frog”) the opening line of my novella Little To Hex Her from the Finnish version of Bespelling Jane Austen. I received a handful of copies in the mail the other day which was quite exciting as I’ve never received any of my books in translation before.

Have you read either of the two new books above about Jane Austen? Are you planning to attend the JASNA Conference (AGM) in Fort Worth next month (aargh! next month! Must email my mantuamaker immediately!)? Amanda and I will be there and we’ll give a full report.

Thanks so much, Janet and thanks for the congrats, Dalila. Congrats to Lorraine, too.

I would love to go to the JASNA conference! Alas, not this year.

What a great first line, Janet! In Finnish it just sounds magical.

I wonder how it really does sound in Finnish, tho. I’ve asked on FB if anyone can write out a pronunciation!