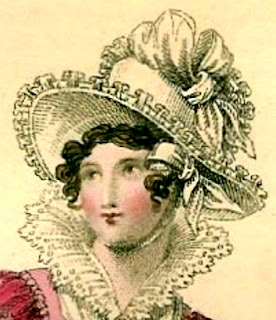 First of all, I noticed that there are several Georgette Heyer ebooks under $2.00 at Amazon Kindle: Venetia, The Black Moth, Fredericka, These Old Shades, The Quiet Gentleman…and more!

This past week on the Beau Monde loop we’ve been having a discussion about what makes a book a Regency. Likely this is a topic that only matters to writers, but I thought I would toss it out to the Risky Regencies community anyway.

I said that a book is a Regency if it is set in the “Regency World.” To me, the Regency world encompasses the British places, people, and events from roughly 1790 to 1830. The books are written from a British/Regency perspective even if the setting is not in Regency London or Brighton or Bath or a country house. The story could be set in British India, Europe (Napoleonic War settings – my Three Soldiers Series), or even America (War of 1812, for example), but it involves the British perspective, about British characters and involved in British social, political or economic concerns. Mostly the stories take place in Great Britain and are about the social world of the privileged, although some of my Regencies have been about characters who are not of the aristocracy, but whose lives are more peripherally involved.

There’s not just one kind of Regency book.

Then there are Regency Historicals or Regency-set Historicals, those other romances set in the Regency. These can be light and quirky or deeply emotional. They can have paranormal elements. They can be adventures or mysteries or relationship books.

Should we call other types of books Regencies? Historicals (non-romances) set in the Regency, usually trade paperback or hardback sized? Books like Patrick O’Brian‘s? Just how far should our definition of Regency fiction go?

What do you think? Does it matter to you?

I always used the think once the Prince Regent became King George IV, that was it.But I’m glad the parameters have expanded. I like your time frame. High sticklers will probably protest, though.:)

Great post, Diane. Your definition matches with my own — the key being the British perspective and mindset of the time, not necessarily the locale the author used for the setting.

Maggie, I found that my connected stories were growing out of the historical Regency period. So the “social” Regency works better for me.

Kristen, I must be on to something if my definition matches yours! Great minds think alike!!

There’s Victorian and Georgian; why not Regency? It makes no sense to me that Regency is often so limited.