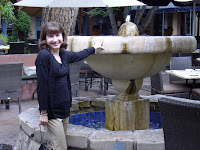 Happy Tuesday, everyone! Hope you are having a great week. Mine is not so fun, since I just got back from a lovely vacation in Santa Fe (eating green chile enchiladas, drinking margaritas, laying by the pool, looking at art…) and now have to settle down to work again. But it’s nice to be diving into a new book and thinking about blogs again. 🙂

When I was trying to find subjects for today’s post, I found out St. Hildegard of Bingen died September 17 in 1179. I’ve always thought she was a fascinating woman, and I love listening to CDs of music, so I thought we could take a quick look at her life (even though she is waaaayy earlier than Regency!)

Hildegard was born in (probably) 1098, the 10th child of a noble German family. Overcome with children, they gave her to the Church when she was 8, which proved to be a blessing in her life. She was highly educated for the times, learing reading, writing, and music as a child. She grew up into a composer, philosopher, writer, healer, and visionary (she was plagued by ill health all her life, and had mystic visions during her sicknesses). She was elected abbess of her community in 1136, and founded at least one other nunnery.

70 to 80 of her compositions survive, along with some of her books (the best known is probably Know The Way), a morality play called Play of the Virtues), and books about the healing properties of herbs. She corresponded with popes, emperors, and people like Bernard of Clairvaux, and went on long preaching tours beyond her abbey. When she died, the nuns of her community claimed to see two bars of light appear in the sky and cross over her room.

Of her visions, she wrote:

But I, though I saw and heard these things, refused to write for a long time through doubt and bad opinion and the diversity of human words, not with stubbornness but in the exercise of humility, until, laid low by the scourge of God, I fell upon a bed of sickness; then, compelled at last by many illnesses, and by the witness of a certain noble maiden of good conduct [the nun Richardis von Stade] and of that man whom I had secretly sought and found, as mentioned above, I set my hand to the writing. While I was doing it, I sensed, as I mentioned before, the deep profundity of scriptural exposition; and, raising myself from illness by the strength I received, I brought this work to a close – though just barely – in ten years. […] And I spoke and wrote these things not by the invention of my heart or that of any other person, but as by the secret mysteries of God I heard and received them in the heavenly places. And again I heard a voice from Heaven saying to me, ‘Cry out therefore, and write thus!

This is just a quick glimpse of her fascinating (and ahead of her time) life! I really like Fiona Maddocks’s biography Hildegard of Bingen: Woman of Her Age (2001). There are some great links to sources on this page and this one too…

Who are some of your heroines this week??

Doesn’t this go to show that there can be (and were) strong women in any era. Of course, I’m having trouble thinking of how it would be to give your 8 year old daughter to the Church. Being the 10th child might help explain it, though.