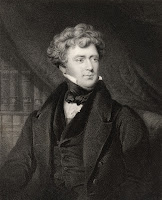 On Sept 25, 1818, the first human to human blood transfusion took place when James Blundell, a popular lecturer at Guy’s Hospital on obstetrics and the diseases of women, treated a severe postpartum hemorrhage by extracting four ounces of blood from the arm of the patient’s husband and transfusing it into the bloodstream of the patient.

When we write (or read) our Regency Romances, we might not realize how limited medical knowledge was at that time. Vaccination for smallpox was relatively new and Pasteur had not yet proven his germ theory of disease. Furthermore, bloodletting was still extensively used. Bloodletting as a treatment for hemorrhage was still in favor in the late 1800s, so it is somewhat remarkable that Blundell decided to use blood transfusion for his hemorrhaging new mother. 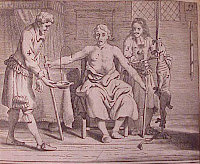 Experiments in blood transfusion began as early as the 1600s. Jean-Baptiste Denys, physician to King Louis XIV of France, transfused the blood of sheep or calves into several patients. In London around the same time, Richard Lower was conducting similar experiments. That any patients survived is thought to be due to the small amounts of blood transfused. By 1670 blood transfusions were banned and further exploration abandoned.

When Blundell began his work with transfusions it had been discovered that transfer of blood from one species to another was harmful. He experimented with animals, discovering that blood must be transfused quickly and that the air must be let out of a syringe before transfusion. Blundell also went on to devise many instruments for blood transfusion which are still in use today. By his death he accumulated a fortune that would be the equivalent of 20 million pounds today.

Funny that I should be writing about the history of blood transfusions today, when I just mentioned this topic last week. Mary Jo Putney’s depiction of blood transfusion in Shattered Rainbows predates Blundell’s achievement, but uses all the knowledge that was available at that time in history to make the scene entirely credible.

What medical innovation do you most take for granted in today’s world?

Tonight I’ll be announcing the winner of Lavinia Kent’s Real Duchesses of London novellas and her What A Duke Wants T-shirt.

If you’ve read my Valiant Soldier, Beautiful Enemy and wonder what happens to Claude, it is almost time to fine out. Oct 1 is the release day for my eShort Story, The Liberation of Miss Finch.

Painkillers of any sort, definitely. And antisceptic. I’m reading up on the Crimean War at the moment, and the field ‘surgery’ is totally horrific. Basically, if you had a broken limb they cut it off, and most of the men died of shock. No wonder! Imagine being strapped down, a man coming at you covered in the blood of all his previous victims with a huge big saw in his hand… And if you didn’t die of shock gangrene got you.

It’s a fascinating topic. It seems elementary to us, that animal blood wouldn’t work for humans, but of course it wasn’t. I’m morbidly fascinated. Hunter’s museum on London, if you get a chance, is well worth a visit if you like that sort of thing.

anesthesia for certain!! Although the whole germ theory would be my second pick…

Before I lived in Thailand, there was a lot I took for granted. I think the biggest one was that in America a baby born with a cleft palette is taken care of as soon as it is safe to do so, without a second thought.

I don’t take any of modern medicine for granted. Not one bit of it. I thank goodness for it because without it, I wouldn’t be here today.

After the summer I’ve had, I definitely say yay for modern medicine! 🙂 So what happened with the first blood transfusion??

Allergy medicine, antibiotics and aspirin are things that I use a lot and can’t imagine a world without them.

Painkillers!!! Oh, yes, Marguerite. The Regency had laudanum, but knew nothing about germs. It seems odd to us now.

Anesthesia. I’m with you, girlygirlhoosier52!

Judy, you remind us that not everywhere in the world has modern medicine, even today.

Carolyn, I’ll bet many of us could say that! I’m glad you were born in this era!

Amanda! Certainly you have a great reason to be thankful for modern medicine! The mother who had the transfusion did survive.

Fascinating post, O Divine One! I had no idea blood transfusions were even attempted during the Regency. The whole idea of bleeding patients for anything sounds ridiculous today, but the concept of “bad blood” was a universal one for thousands of years.

Antibiotics and vaccinations have saved millions. I cannot begin to imagine what the world would be like without them.

I think basic sanitation is a major improvement. Bathing more than once a week, for example, or having the latrine far away from the well, or even just boiling water to make it potable. I know I can’t be without running hot and cold water (why I dislike camping).