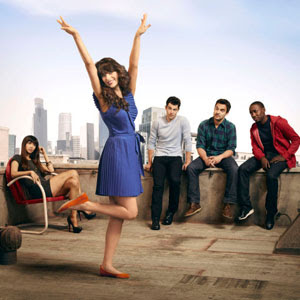 Uh-oh! I almost did what Janet did last week–completely forget what day it is. Somehow it seemed like a Monday….

I don’t watch a whole lot of TV. I have shows I get obsessed with and MUST watch (like my late, lamented Deadwood, Mad Men–which won’t be back until March 2012, and Vampire Diaries, though I’ve only seen one episode so far of the new season), but don’t spend a whole lot of time on it. Last week I heard some good things about the new Zooey Deshcanel show New Girl and decided to give it a try. I’m glad I did, because it is hilarious!

The premise is this girl (Jess), who is very quirky and dorky, has a messy break-up with her boyfriend and ends up living with 3 guys as roomates. I tried to imagine how this would work in the Regency. I suppose it could be a girl who has 3 older brothers, all of them over-protective of her as she stumbles her way through the Season looking for the perfect match. I could imagine all sorts of awkward, funny situations our heroine and her well-meaning but exasperating brothers could get into as she sorts through suitors looking for the perfect hero!

What shows inspire you??? What other strange places do you look for inspiration?

My daughter & I will be watching this tonight. Love the D-Bag Jar. Too funny.

I’m trying to figure out how to make Say Yes To The Dress into a Regency!
Or Biggest Loser (which so far isn’t that great this season
Or Project Runway.

LOL Jane! I love that too–I think I know a few people in real life who could use one of those 🙂

I am inspired by THE AMAZING RACE. I love to travel and being a contestant would be wonderful. We have the perfect family team-my husband for navigation, our son for all the difficult challenges that require falling out of high places or climbing, our oldest daughter because she is so smart & pretty and knows how to make things happen, and me to be ballast and handle the cultural things.
I guess there could be a Regency version, only sort of in slow motion. Carriage rides and ship voyages did take a bit longer than jets. Fun to speculate.