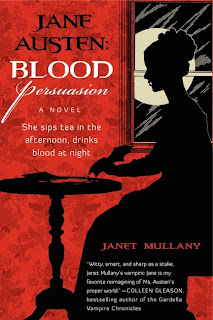 … and Contest. As promised, an interview with a vampire and I’ll be giving away signed copies of Jane Austen: Blood Persuasion, to two lucky people chosen at random at midnight EST on Saturday, October 8. You can also win copies at other stops on my blog tour, win a collection of Austen-vamped themed stuff, and find excerpts and so on at my website.

I’m thrilled to have as my guest today Mr. Luke Venning, one of the Damned and a close associate of Jane Austen. (And ladies, he’s hot.)

Janet: OK. Consort, bearleader, pain in the neck. (Note: there is a Glossary of the Damned on my website and in the book. A Bearleader is the mentor of a fledgling–that is, recent–member of the Damned.)

Luke: But Bearleader in no way implies a paternal or even fraternal relationship.

Janet: Tell us about Jane.

Luke: She was fearless, funny, sharp-tongued, opinionated. By the standards of the Damned she was rather gauche. I found her very handsome–she had the sort of good looks that showed in animation. She looked nothing like the pop-eyed, bad-tempered creature in Cassandra’s famous sketch.

Janet: People were rather cross with you and me about the way Jane and the Damned ended. They wanted a HEA.

Luke: I hardly think anyone will believe you squeezed a HEA out of this book either.

Janet: Do you see yourself in her heroes? Any one in particular?

Luke: She claimed I was all of them although I strongly object to being the worthy clergyman of Mansfield Park. The earlier version of that book was all about the Damned but her brothers persuaded her to change it and so Henry Crawford, who I believe was based on me, played a lesser role. I also find Mr. Darcy and Mr. Knightley stuffed shirts. I think I’m most like Henry Tilney, because that book is set mostly in Bath where we first met and which she started shortly after our liaison.

Janet: I’d say you’re more like Willoughby or Wickham. None of the gentleman you listed have that sleazy side.

Luke: Oh, that. Madam, I am one of the Damned. I am what I am. Jane was a greedy girl; she quite weakened me. I needed sustenance.

Janet: And then you encouraged her to feed–or dine, I should say–from a footman.

Luke: It may have been a tremendous sacrifice on her side–I doubt it from the grin on her face. The poor fellow could scarcely walk after, but he did not seem to object too much.

Janet: Moving on … describe a typical day for the Damned in Jane’s time.

Luke: We rise about two in the afternoon–it is vulgar, although by no means dangerous as some may claim, for the Damned to encounter sunlight. Those from whom we have dined are sent to the kitchen to be revived so they may get on with their work. We pay calls, usually on foot, for animals do not take kindly to the Damned. Occasionally we gather for music with our neighbors although mostly this is as a foreign language to the Damned. Finally we are able to dine–we like to entertain, for our guests make themselves available to us after dinner–and we indulge in cards and dancing. We enjoy the night most, you understand.

Janet: I know Jane enjoyed society, but wasn’t she bored?

Luke: Absolutely; when the dear girl was not depleting my strength, she sulked and fretted somewhat and I was most relieved when she began Mansfield Park. I think she found our conversation lacking.

Janet: I believe you went to the Americas in the 1820s.

Luke: I did. I mostly stayed there for some years–I went west as soon as the continent opened up and I did rather well in gold and silver mining, as well as some other business interests. You understand, of course, that I had to move frequently for generally our kind has not been kindly accepted. It becomes so tiresome having garlic and crucifixes thrust in one’s face (a charming yet useless tradition) and dealing with angry husbands.

Janet: And what are you doing now?

Janet: Good idea. Where do you think Luke is now and what’s he doing? (Note: “waiting for me in my bed” does not count and will disqualify your entry.)

Luke is in Vegas, of course!

Some of those other business ventures of his in the American West in the 1820’s included riverboat gambling and a long stretch in San Francisco running a fabulous gambling hall.

Later he returned to London to try the skills he acquired Across the Pond.

And by the way, anyone who hasn’t read Bespelling Jane you are missing a real treat! I thoroughly enjoyed everyone’s Jane Austen tales.

And Janet, you have a real gift for red hot contemporary romance!

Great posting, Janet! I would imagine that Luke has fenagled his way into politics somehow … behind the scenes, of course. Charm like that shouldn’t go to waste. : )

Love these suggestions! thanks for playing, Louisa and Amy. And thanks, Louisa, for the kind words about BJA.

I won’t play, because I can’t win, but if I were Luke I’d still be in bed because it is not 2 pm here yet. (I didn’t say he was waiting for you or anyone!)

I think Luke is hanging out in New Orleans and living the life of the idle rich, hosting parties and feeding off his guests.

He is most likely working in the banking industry or the oil industry. That seems to be where all the blood suckers currently are.

He does seem like the type of guy that always wants to have a good time. But what that would mean for him personally….

Hard to pinpoint, he’s a complex guy. It’s not obvious what he will do or where he will be next. And I’m cluesless in many ways.

Maybe he’s in LA, living a life of luxury. Or he could be in London where it’s urban and happening…