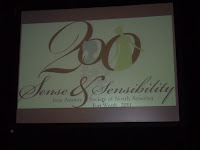 Happy Tuesday, everyone! I just got back Sunday evening from the JASNA AGM in Fort Worth celebrating the 200th anniversary of Sense and Sensibility, and it was a fabulous time. I met other Janeites (which is a relief to my family, since they get sick of me talking about Austen novels and movies so much! That was not a problem there–no one ever gets sick of Austen in JASNA….), ate some fabulous food, bought too many books and other stuff in the Austen emporoium (including a Pride and Prejudice board book for my one-year-old goddaughter–you can can never start P&P too early!), and got to spend time with Risky Janet (who declared herself my “chaperone” for the Saturday night ball!). It was a great weekend.

Since there were about 10 workshops in each session, I wasn’t able to go to everything I wanted. But here are a few things I did make it to:

1) Victoria Hinshaw’s “The Sensible Regency Wedding” (Vicky wrote some fabulous Regencies for Kensington, and it was great to get to see her again…plus to hear about respectable and not-so-respectable marriages!) 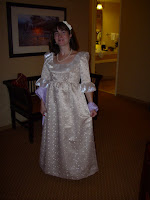 2) “Chawton House Library Asks; Are You An Elinor or a Marianne?” (actually a discussion of the vogue for “sister novels” and their meanings in the Romantic age. I especially enjoyed hearing about a short 37-page story titled The Castle of Montabino, an adventure story involving scandal, kidnappings, ghosts, good and evil twins, and moral lessons…)

4) Plus workshops on snuff and cravats, Fanny Burney, horrid novels, the Emma Thompson adaptation, and Austen’s writing income (among other things!).

I did not dance much on Saturday, but I think Janet did not sit out a set! And I tried my hand at cards but was pretty hopeless at it (as usual). And I loved looking at all the wonderful gowns… 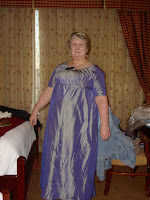 I think the highlight of the conference was listening to Andrew Davies in his lecture “Mr Darcy’s Wet Shirt and Other Embarrassments: Some Pleasures and Pitfalls in Austen Adaptations“–he was so much fun to listen to. Janet and I decided they should have a whole conference centered around watching the adaptations while he told anecdotes and insights.

I am still tired from all the adventures this weekend! I had to force myself to get up off the couch (where I had laid down to watch my S&S DVDs) and get back to writing today, but I’m also feeling very inspired.

What would you want to do if you went to the JASNA AGM? What workshops would you like to see? Which is your favorite film adaptation???

Ooh, Amanda it sounds as if you had a fabulous time, and you and Janet look adorable in your dresses. I’ve always wanted to go either the JASNA general meeting or the Jane Austen festival in Bath. As for my favorite Austen adaptation, it has to be the 1995 Persuasion with Ciaran Hinds and Amanda Root. I just adore the scene at the end of the film of the two of them on his ship, traveling the world together, finally happy. In fact, I think I need to watch that film again!

I am allll envy!!! It sounds absolutely wonderful. I may have to plan a JASNA conference sometime.

So glad Vicky’s workshop went well, although I would expect anything she did to be wonderful.

You and Janet look gorgeous. I LOVE that dress, Amanda. Your modiste outdid herself. And you look the picture of health.

Cast another vote for the Ciaran Hinds Persuasion. I LOVED that movie!!!

Amanda forgot to mention that I’m balancing my cell phone on my bosom (courtesy of my new corset)–we didn’t have a beer can available.

It was a really wonderful event. I took notes during Andrew Davies’s talk so I may blog about that later, and I also have a pic of him dancing. I liked it so much more than any romance writers’ conference I’ve been to and I’m definitely going to next year’s in Brooklyn!

It looks like you two had a marvelous time.

And, yes please, write about the talk given by Andrew Davies. (Yay!) My daughter and I have just started watching Wives & Daughters, which while not an Austen, is a Davies’ screenplay!

LOL! Yes, Janet’s corset was quite a formidable construction. 🙂 I think it took a while to figure out that lacings…

Diane, thank you so much!! That was the dress I was supposed to wear this summer at the Beau Monde soiree, so I am very glad to have the chance to get it out again. The fabric is this beautiful champagne-colored brocade.

Jane, I would have loved to hear more about Davies’s other adaptations too! I thought the “Bleak House” from a few years ago was wonderful. His talk wasn’t nearly long enough…

You look lovely, both of you, though I’m disappointed not to see the beer can trick!

I would love to go to a JASNA event. All sessions sound interesting to me (though seriously, what’s not to love about Colin Firth in a wet shirt?) I’d also dance as much as I could.

Hard to say as to my favorite Austen adaptation. 1995 Persuasion is up there along with the 1995 P&P but I’m not too much of a purist to have enjoyed the 2005 P&P, while recognizing some of the inaccuracies.

Favorite film adaptation would be PRIDE AND PREJUDICE the Colin Firth version. To be fair, I haven’t seen all of the movies.
You both look lovely. I am so glad you had a great time. What a wonderful event. I would attend anything I possibly could.
I will have to have an Austen film festival to see all these movies I have missed.