Last week I wrote a version of this blog for my Harlequin Historical Authors Blog, but I thought some of our readers here might have missed it. I wrote about a book I thought so wonderful, I wanted to be sure everyone interested in the Regency heard about it. My thanks to the Beau Monde member who mentioned it first (Isobel Carr/Kalen Hughes, perhaps?). 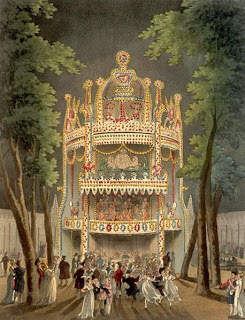 The book is a new research book, Vauxhall Gardens: A History by David Coke and Alan Borg, a coffee-table sized volume brimming with everything you’d want to know about these historical pleasure gardens. It was worth every penny I spend on it and I spent a lot of pennies!

I think of Vauxhall Gardens as the Disneyland of its time, a place people of all walks of life and social classes flock to for recreation, to see wonders that thrill, amaze, or simply entertain them. Things like fireworks and tightrope walkers, musical performances, frescos made so real you felt transported to a different land, spooky dark walks featuring a hermit at the end. There was food special to the place, just like the special foods we find at amusement parks or State Fairs. Paper-thin slices of ham, tiny whole chickens, orgeat (the soft drink of the day), poor quality wines, cider and ale. 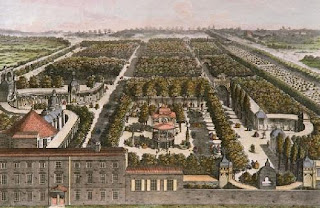 Jonathan Tyers opened Vauxhall Gardens in 1729 and from the first made no distinctions between the classes. Everyone paid the same price of admission, so from the first, the classes mixed in the various entertainments like a Venetian Carnival. Throughout the years Vauxhall Gardens entertained visitors with music, a mix of performances from serious styles of music to light-hearted popular tunes of the day. A grand organ was included. Handel was featured. Popular vocalists appeared.

Artwork was always a part of the gardens, including paintings by Hogarth and sculpture. A statue of Handel came to personify Vauxhall and remained in the gardens most of its almost 200 years.

Other entertainments appeared, some from the beginning and some as years went on. Fireworks. Fountains. Lamps which were lit all at once. A rope dancer named Madame Saqui. I once mentioned Madame Saqui in one of my books and received a letter from a reader in the UK whose last name was Saqui. She’d not known of this possible ancestor until reading of her in my book

I’m using Vauxhall Gardens again in Leo’s story, the last of the Welbourne Manor books, due to be released in 2012. This book is set in 1828 and I was delighted that my new research tome could give me detailed information of what happened at Vauxhall Gardens that year.

New was the Grand Hydropyric Exhibition, consisting of cascades of colored fire and water. A new vaudeville called The Statue Lover was introduced, as well as a short comic ballet called The Carnival of Venice. Even though there had been complaints of excessive noise the previous year, a reenactment of the Battle of Waterloo took place on the battle’s anniversary. They also introduced a lottery with dozens of different prizes.

I may not use any of those new entertainments in the book, but I did learn that Vauxhall Gardens did not open until June 4 of 1828. I’d set my story in May of that year, but now have moved it to the end of the London Season (because I like to be as faithful to history as I can be)

We’re all probably thinking of fall holidays instead of summer amusement parks like Vauxhall, but Vauxhall’s Dark Walk to visit the hermit could be akin to a ghost ride on Halloween. Or a Hay Ride, because a lot of hanky-panky went on on the Dark Walk.

Are you planning any Fall holiday outings? This Friday I’m going to the Library of Congress to hear my friend Carol Brown talk about costuming for places such as Dragoncon or the Renaissance Fair (12 noon in the Pickford Theatre and open to the public for any of you in Washington, DC)

On Halloween, Risky friend Michelle Willingham has gotten a bunch of us to have a Trick or Treat contest. Deb Marlowe is one of the “houses” for Trick or Treat, and my friend Darlene Gardner who writes for Superromance. We’ll all have prizes. Hey, Halloween is my next blogging day! I’ll have to try to find a Regency connection to Halloween. Check my website soon for complete details.

I also have a new contest going on my website. My September book, Valiant Soldier, Beautiful Enemy, is still available online, and don’t miss my October 2011 Undone short estory, The Liberation of Miss Finch.

I have always been fascinated with what actually went on at Vauxhall Gardens and enjoyed your post and pictures. I am doing Nanowrimo this year and mentioned that a woman should read one of your books. She was looking for information about a woman charged with murder in Regency times. I said “Read Diane Gaston’s The Vanishing Viscountess.” It’s a great read and Diane does stellar research with her novels!

Well, bless your heart, Arite Mesia! What a nice thing for you to do and what a compliment to me!

I have this book on my Christmas wishlist!!!

This was an awesome, informative post, Diane! Thanks for always keeping us smart and enlightened. 🙂

Amanda, this book would make a terrific Christmas gift.

Alyssia, Thank you! I only scratched the surface and barely that. There’s so much more in the book!

Vauxhall Gardens has been mentioned in so many books I have read. I have been curious what exactly it was like. I had no idea it was so large. Between the pictures and your descriptions I have a much better idea of what it was like. The book sounds like an invaluable resource for an author. Thanks for the information. Would love to see a copy of the book.
Thank you for including at least a few picture. I’ll have to find and take a look.

How fun! Thanks for sharing your research, especially thanks for the story format. 🙂 Another book for the wish list. LOL!

I love this book, and was startled to discover that the Dark Walk (which has appeared in many a book, including my own!) was gone by 1750. Something to fix should I ever get the rights back …

librarypat, I’m delighted that you learned a bit more about Vauxhall Gardens. I’m sure I’ll “revisit” there again.

Judy, you are always welcome!

Hi, Isobel!!!!
Groan….I did not read far enough in the book to learn that the Dark Walk was gone after 1750. My poor characters!! They’ve all walked into an abyss!!!!

Diane, we all make these mistakes sometimes. I find it’s often the things I *think* I know that bite me.

Wish this book were not so expensive. It looks great! I’ll have to check the local university library, which is a definite boon to my writing budget.