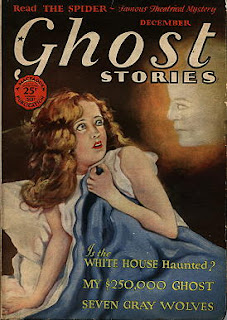 My quick surfing of the net and peek into Google Books yielded very little information about Halloween during the Regency.
In 1818, Blackwood’s Magazine entertained its readers with ghost stories from Wales (as opposed to Scotland, where such stories usually originated, apparently). Witches, ghosts, demons, evil spirits, dogs of hell, fairies, corpse candles, and something called Kyhirraeth, a “doleful foreboding noise before death,” were discussed.
This example amused me:

The Rev. Mr Thomas Baddy, who lived in Denbigh town, and was a dissenting minister in that place, went into his study one night, and while he was reading or writing, he heard some one behind him laughing and grinning at him, which made him stop a little. It came again, and there he wrote on a piece of paper, that devil wounding scripture, 1 John iii. ‘ For this was the Son of God manifested, that he might destroy the works of the devil,’ and held it backwards towards him, and the laughing ceased for ever; for it was a melancholy word to a scoffing devil, and enough.

Clever fellow, Reverend Tom. Nerves of steel, as well. I believe I would have screamed and run from the room.

It seemed to me that the Regency era people prided themselves on being rational, with no time for such nonsense as ghosts and witches and fairies. I suspect the prevailing view on the occult was similar to Sir Walter Scott’s.
In Letters on Demonology and Witchcraft Scott clearly scoffs at ghost sightings and such. He believes in rational explanations for events which are credited to the supernatural.
Here’s an example in Scott’s words:

The remarkable circumstance of Thomas, the second Lord Lyttelton, prophesying his own death within a few minutes, upon the information of an apparition, has been always quoted as a true story. But of late it has been said and published, that the unfortunate nobleman had previously determined to take poison, and of course had it in his own power to ascertain the execution of the prediction. It was no doubt singular that a man, who meditated his exit from the world, should have chosen to play such a trick on his friends. But it is still more credible that a whimsical man should do so wild a thing than that a messenger should be sent from the dead, to tell a libertine at what precise hour he should expire.

Sir Walter is clearly a skeptic. Too bad he didn’t have access to Celebrity Ghost Stories on the Bio Channel.

Perhaps in Wales and Scotland, families practiced old rituals on Halloween during the Regency. Perhaps people told ghost stories by the light of the fireplace at night and carved turnips into jack o’ lanterns, but I suspect Halloween was not celebrated among the Beau Monde.

I’m celebrating Halloween today with a contest! Seven authors, including me, are hosting a Novel Trick or Treat Contest. Stop by my website to start. We’re each giving away prizes to some lucky commenters, but, like all good trick or treaters, you have to visit each of us in turn. Come join the fun!
How else are you celebrating Halloween today?
Posted in Giveaways | Tagged halloween, Sir Walter Scott | 6 Replies
0 0 votes
Article Rating
Subscribe
Login

I will be avoiding zombies and other creatures with an urge for inappropriate touching.

Ha, Carolyn! All our zombies here in DC are confined to Captiol Hill.

Jane, I’m so proud of myself. I haven’t eaten even one piece of Halloween candy.

Nothing exciting. We had our annual Oktoberfest family dinner yesterday and I gave everyone their treat bags. We live far out in the country and have no little ones, so no trick or treaters here.

We had only a few trick or treaters, fewer than last year, librarypat. I have a whole bunch of candy left over, but I’m still resisting taking any!!!