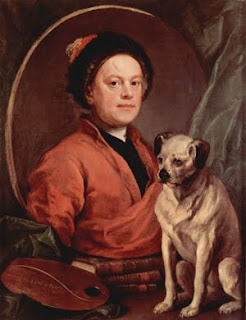 I’m disgracefully late with my blog post today but we still have time to wish William Hogarth a happy birthday. I’m going to give you a few interesting facts about Hogarth who I find such a wonderful, sympathetic sort of person, well ahead of his time in some respects, an artist with a social conscience and sympathy for the underdog–for instance, he was an early proponent of the humane treatment of animals, possibly because he was brought up in Smithfield, London, which was the area where livestock were slaughtered.

Things I love about Hogarth:

Here are a couple of Hogarth’s paintings I really like–his study of his servants and the amazing oil sketch The Shrimp Girl. Which of his paintings/engravings do you like? Any more fun facts about him? 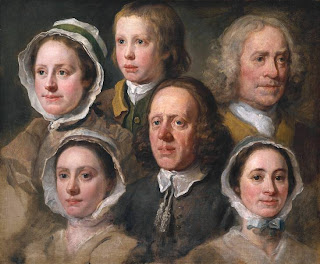 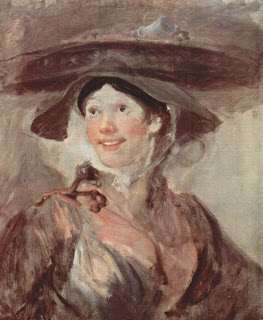 Thanks so much for this post, Janet!! I also adore Hogarth and didn’t realize it was his birthday :))

Part of the attraction of 18th century Vauxhall Gardens were the paintings attributed to Hogarth. Hogarth was a great supporter of Vauxhall Gardens and he had a gold ticket giving him free admission for life. It’s in the British Museum.

There’s a funny, vulgar drawing by Hogarth where Gulliver is being punished in a rather crude manner. I shall say no more because it’s a potty humour sort of picture.

Happy Birthday, Mr. Hogarth! I hope to get to see your house someday.

Ha! I love #5, and wish I possessed that kind of wit and courage when in a tight spot.

Thanks for the great post, Janet. I am with you in loving that painting of the servants. So real, so human, neither idealized nor charicaturized.

I think I learned about the existence of the Foundling Hospital from the post here. At any rate, I visited it on my trip to London this past September and found it quite moving. Interesting that Hogarth and many of the other supporters were themselves childless — don’t know if that was a cause of their work to help foundlings or a sign of how empathetic they were that, even without children of their own, they could understand the need for humane care of these children.