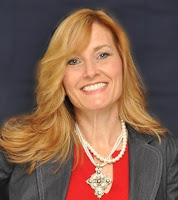 Welcome back Emery Lee who is with us today to talk about her latest release, Fortune’s Son. Emery visited us last year with The Highest Stakes, an incredibly well-researched debut set in the Georgian racing world. 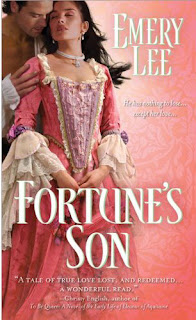 Lee brings the atmosphere of the Georgian era to life with lush descriptions that beg the reader to see, hear, feel and touch it all….suprising twists and turns that are reminiscient of Fielding’s Tom Jones or Defoe’s Moll Flanders — Kathe Robin, RTBookReviews

Emery is giving away a signed copy of Fortune’s Son to one lucky commenter chosen at random.
Welcome, Emery! Tell us about Fortune’s Son.
Fortune’s Son is the story of a complex and tumultuous romantic relationship between two people who despise and buck the world they live in but must maintain themselves in it nonetheless. Philip is a young adventurer, the disowned black sheep of an aristocratic family and Susannah Messingham is beautiful widow left upon her husband’s death with little means to support her extravagant lifestyle. While at an upscale gaming house she observes Philip winning at the tables and sets out to use her feminine wiles to persuade him to teach her. Philip, however, is not as malleable as she had hoped…

How did you come up with the idea for Fortune’s Son?
Philip and Susannah (Sukey to her intimates) are major secondary players in my first novel, The Highest Stakes, and characters who almost stole the book! Although part of their complex relationship is portrayed in my first book, I realized at the end of it that there was so much left to tell about them. How did they actually meet? What really drove them apart? Will they every have a happy ending? I had to write their story because they demanded that I do so!

What is risky about Fortune’s Son?
Honestly everything! Philip and Sukey are gamblers – people who rely on Lady Luck for even their daily bread. They are so very different yet mirror one another in many ways. She harbors a secret scandal and Philip is constantly at war with his family. She’s a widow with a social position to maintain and eight years older than Philip, who is virtually penniless, yet, the attraction between them is undeniable. Although clearly evident from their first meeting, they both fight it tooth and nail, but it is bigger than they are. In the end, however, love prevails and they are both shown to make tremendous sacrifices for one another.

Did you come up with any interesting research while writing this book?
Tons of stuff and almost all of it is in the book! I wanted to build the Georgian world as it has never been depicted in a romance novel – the sights, the sounds, the places and events that were part of my characters daily lives. This included everything from the play house to pugilism matches. I also incorporated many real historical figures into all of these scenes to make them more vivid. Two of my favorite scenes are Philip and George at the cockpit and the scene where Lord March tells Philip and George about his famous carriage race, a true event that I used in the resolution of my story.

You really love the Georgian period. Can you tell us why?
My very long answer to this question can be found in my blog post “Why I Love the Georges”, but the short and sweet response is:

“Why the clothes, dahling!”

What is next for you?
My very next release is actually an erotic historical romance novella, A BREACH OF PROMISE, from Ellora’s Cave. I’ve written it under the pseudonym Victoria Vane because it’s so unlike any of my other work in tone, style and sensuality level. It’s very light and witty but also very sexy, a story I like to think of as kind of Heyer-esque but with lottsa heat! My next Emery Lee project (PG13 again) is very exciting. It’s a full length romantic historical novel, working title, CHASING VENUS. Set in the mid- Georgian period, it involves science, discovery and high seas adventure between a couple who could not be more diametrically opposed to one another if they tried. For readers who relish conflict in a romance – it’s sure to deliver!

Diane, here, again. You’ve all read lots of historicals. Name any game of chance that was popular during the Georgian period. Or ask Emery a question. Make a comment for a chance to win a copy of Fortune’s Son.

Diane, isn’t love the biggest – and most popular – game of chance in any time period?

Emery, a couple of questions. One, have you ever considered writing in any other time period/genre, and if so, which one(s)? And two, what is your favorite hero type?

Would love to read your book – dsr002@gmail.com

I LOVE historical romance set around gaming dens! There is so much atmosphere and adventure and intrigue to be had in those places! Perfect for a sweeping romance!

Faro was the other game played in the Georgian era that continued into the Regency.

What I have always found intriguing is the accounts of people gambling large sums of money on backgammon – a game more of skill than chance.

Was it a bit more fun to write a novel set in the Georgian era, an era that threw caution to the wind and didn’t have the strict rules of the Regency?

Re games, I recently learned (sort of) how to play piquet (from a computer program) so I could write about it realistically (more or less).

Re the drawing, don’t enter me as I have already ordered my copy. Looking forward to reading it, Emery. I love the Georgian clothes, too, especially the earlier ones. One of these days I want to make myself a robe volante.

@ Margay –
I don’t see myself ever writing contemporary fiction. I love history and my natural writing voice lends itself well to historicals. I believe there is still much left for me to explore in the Georgian era and will likely stay there until I reach the point that I lack inspiration for fresh stories. After that, who knows? I may make a foray into the gilded age.

As to part two, I generally despise the ultra alpha males that are so predominant in romance. I much prefer multidimensional and complex heroes – usually (but not always) they are the “tortured” type. That’s why I love Philip’s character so much- he’s very mercurial. You never know what he’s going to say or do.

faro was another game.

You are so right about the excitement of gaming being a great backdrop for a romance. It was fabulous fun creating this world without rules.

The Georgians were a wild and callous bunch who bet on absolute everything. I read an anecdote where a man was passing by a gaming club and dropped to the ground. The event was witnessed by several “gentlemen” inside who began betting on whethere he was dead or not, and even prevented someone from aiding the fallen for fear it would affect the outcome!

In FORTUNE’S SON Lord March and George Selwyn make a similar bet on whether or not their “friend” Lord Hastings will commit suicide after a certain unfortunate event. Very callous indeed!

@ Barbara- Thanks so much for ordering it! I do hope you enjoy the story.

Welcome, Emery! We’re delighted to have you back as a guest.

I think of the Georgian period as a wilder, more raucous, gaudy time than the Regency. Lots to write about there, I suppose!! Although I did write a scene of “strip piquet” in The Wagering Widow.”

@ Diane- I read that book and loved it! You obviously learned the game as well. Piquet is great fun. My husband and I sometimes play it…Gee, I wonder how that strip version might work out?

I love when secondary characters get them time to shine! Sometimes I like them just as much as the main ones or it happens that I read the secondary characters’ story first. I like that it features a complex relationship because it makes it for interesting for them to settle their differences and find their way to HEA.

I enjoyed the post and I’m looking forward to reading Fortune’s Son. It sounds like a fantastic story.
Games played during the Georgian period are hazard (a dice game) and faro (a card game).

@ NA- I love secondary characters! They have so much more freedom than the primary players do!

@ Barbara- It really is an unusual and fun story but very touching too. My editor likened the final resolution in some respects to O. Henry’s Gift of the Magi. I wonder if you’ll agree.

This looks like so much fun. Love Georgian-set (pre-Regency Georgian, though I adore those, too) historicals. Can’t wait to get this one. I don’t think I have much to add. Hazard and faro are the ones that come to my mind first. Is whist Georgian or a game of chance? Piquet? Backgammon? I’m reaching here, I know…

I think that whist was a popular game but I have no idea how it was played. I do enjoy characters who have a history together. It’s good to see them work out their differences.

I think of whist as an early form of bridge, but I could be totally making that up. Others have mentioned hazard, faro and piquet, which are the only games I know of that might have been played in a Georgian gambling den. I’m sure there are others, just don’t know them. Jo Beverley wrote a book called “Hazard” and Georgette Heyer one called “Faro’s Daughter” — should we be on the look for a romance with piquet in the title?

Would like to add that I’m intrigued by Ms. Lee’s comment that she despises the ultra alpha males so predominant in romance. We can discuss exactly what is meant by “alpha” at great length, but I definitely agree that too many of the heroes who fall into this category are so alpha that they are one dimensional and boring. I too prefer multidimensional and complex heroes, and with her comment she sold me on Philip and “Fortune’s Son”.

The dress is gorgeous and you look lovely in it. Was it the same one used for the cover, or was it copied? I don’t think I have read much that takes place in the Georgian period, so this will be an enlightening book.

Whist was a popular card game during thais time period and continued to be popular in later time periods.