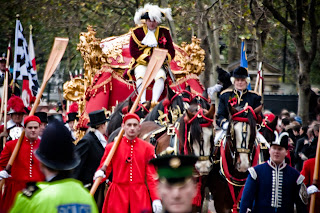 We missed it. The Lord Mayor’s Show!

Of course, I did not know of the Lord Mayor’s Show, I confess, so I wouldn’t have known I should have been in London this weekend to see it.
In 1215, King John granted a Charter to the people of London allowing them to elect their own mayor every year. He required the new Mayor to present himself and swear loyalty to the Crown. Each year the Mayor had to make the long journey up river from the City of London (the historic center of London that is now the financial district) to Winchester to pledge allegiance. The journey, made yearly for the last 785 years, barring plague and fire, war and insurrection, developed into a grand pageant that continues to this day. 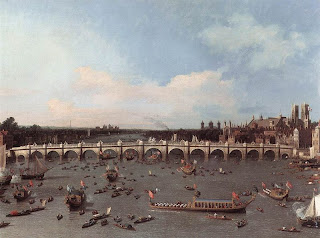 In 1750, Canaletto painted the scene in exquisite detail.
I got to wondering what the parade would have been like in the Regency. The Belle Assemblee, 1811, gives a description:

When the procession arrived at the Obelisk in Fleet Street, it was joined by the Judges, Nobility, Foreigners of Distinction, etc. At about five o’clock the cavalcade arrived in King-street. On entering Guildhall the Lord was greeted with loud and reiterated shouts
of applause.

After that, the Lord Mayor and guests partook of a lavish dinner followed by a ball.

The lord mayor’s show is now, I believe, considered to be the only stated exhibition in the metropolis that remains as a memorial of the great doings in the time of the pageants. It is now, however, but the mere shadow of what it was formerly. According to the accounts written at various periods, from the year 1575, we learn that the show then consisted of a far greater number of persons, banners, and decorations, than at the present time; and also that it was customary for the lord mayor and the nobility to stop three or four times between Blackfriars and Guildhall, to view the pageants, or plays, performed upon stages erected for the purpose.

Maybe next year I can go to London and see the parade for myself. If I do, I’ll be sure to let you know how it stacks up to the one in 1811!
What’s your favorite parade?
0 0 votes
Article Rating
Subscribe
Login