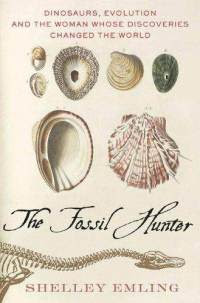 I ran across The Fossil Hunter by Shelley Emling at the Museum of the Earth. I couldn’t resist a book that brought together two unlikely loves of mine—dinosaurs and the Regency.

As children, my brother and I decided we were going to be a brother-and-sister paleontologist team. We read voraciously. We loved going to natural history museums, browsing the gift shops for dinosaur models and making a whole paper mache world for them to inhabit. Even though I eventually moved on to other interests, I haven’t quite lost that fascination with dinosaurs. I’ve seen all the Jurassic Park movies. Although the sequels were nowhere near as good as the first, the kid in me still enjoyed the dinosaurs. 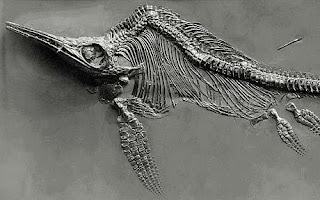 I always thought it was cool that a brother and sister, Mary and Joseph Anning, were the first to discover a fossil ichthyosaur, in 1811. But not until I read this book did I realize that Mary Anning went on to make many other important discoveries, including the first plesiosaurs, prehistoric fish and the first pterodactyl found outside of Germany. The image below, Duria Antiquior, is a watercolor by Mary’s friend, the geologist Henry De La Beche, depicting the creatures she discovered. 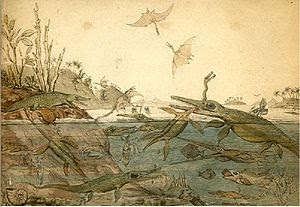 Mary was born into a poor, Dissenting family. Despite the dangers (she was almost killed in a landslide that killed her dog Tray) she sought shells and fossils in the Blue Lias cliffs near Lyme Regis, selling her finds to help support her family. But she clearly brought a passion to her business. She had a keen, inquisitive mind and read as widely as she could. She was skilled at reconstructing her fossils and making accurate sketches of them. She worked with some of the most influential geologists of the time, sometimes guiding them on fossil hunting tours and selling them specimens. Nevertheless, she was not always given credit for her contributions.

“Men of learning have sucked her brains, and made a great deal by publishing works, of which she furnished the contents, while she derived none of the advantages. She says she stands still and the world flows by her in a stream, that she likes observing it and discovering the different characters which compose it. But in discovering these characters, she takes most violent likes and dislikes. Associating and being courted by those above her, she frankly owns that the society of her own rank has become distasteful to her, but yet she is very kind and good to all her own relations, and what money she gets by collecting fossils, gives to them or to anyone else that wants it.”

Her finds, as well as other new discoveries of land dinosaurs around the same time, led to much controversy. Many geologists of the time were men of the cloth and deeply religious. Although some were moving away from a literal interpretation of the Bible and saw Genesis as an allegory for events that in reality took longer to unfold, they still strove to reconcile science with their faith. 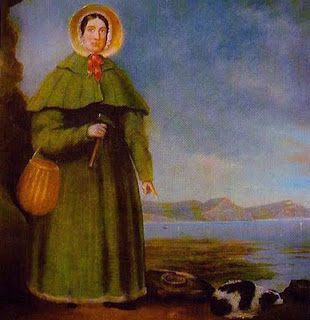 Many sought geological clues to support a worldwide flood. At that time, the concept of extinction was controversial, for Noah was supposed to have saved all the animals. Some wondered if the dinosaurs perished in the flood. Others speculated that dinosaurs might still exist in remote, unexplored parts of the world. Another problem was how man could have coexisted with such creatures. If not, why would God create a world that for a long time was dominated by fearsome reptiles?

However, even when the goal was to reconcile science with the Bible, new discoveries were made. These sparked new ideas and helped to lay the groundwork for Darwin to develop his theory of evolution. And Mary Anning contributed greatly to this process.

She struggled financially for much of her life and became ill in 1846. Some of her geologist friends created a fund to help her, but sadly she succumbed to breast cancer the next year, at the age of 47. There is an exhibit on Mary Anning at the Philpot Museum in Lyme Regis and discoveries are still being made on the beaches of Lyme Regis, part of a 95-mile stretch of shoreline called the Jurassic Coast.

I recommend this book. Mary’s life makes for interesting reading and there are so many interesting insights into the history of scientific thought, the role of women, along with glimpses of what life was like in Lyme Regis during the Regency and after. It makes me want to go hunt some fossils myself.

Anyone else into paleontology? Did you know about Mary Anning? Did you know she inspired writer Terry Sullivan to compose the following tongue-twister?

The fascination with dinosaurs has escaped me, although I love the Jurassic Park movies, too!

Mary Anning’s story shows that there were brilliant women in any era, even though we might not read of them in our history books.

I wasn’t into the dinosaurs, as I was into horses, however, a couple of boys in elementary school were into dinosaurs. They respected my love for horses, and I respected their love for dinosaurs, so learned a lot. Dinosaurs were not furry and fun to play with, like dogs, so held no interest for me. 🙂 But I admit that the best part of Terra Nova is the dinosaurs.

What a remarkable woman! Thank you so much for sharing her story. I would never have known of her.

I had heard of Mary Anning, but I didn’t know about the book. Definitely adding it to my wish list!

My brothers were always interested in dinosaurs and I learned quite a bit through them. My interest in birds and reptiles (I have one floor to ceiling bookcase of books on each of them.) has made me a bit more aware of dinosaurs as well. And I must confess anytime an article about dinosaur discoveries shows up on my yahoo homepage I read it!

How fascinating! Thanks for telling us about her.

Diane, I’ll bet there are more scientific women we don’t hear much about. Well, I know of Caroline Herschel who was a huge help to her brother the astronomer. Note to self: write a scientific heroine sometime.

Judy, my horse phase came a little after my dinosaur phase. I read all the Marguerite Henry books and eventually took riding lessons.

Louisa, I smile just thinking of that bookshelf. Reptiles are cool and I love birdwatching. Right now there’s a lovely flock of cedar waxwings that feed off our crabapple tree.

As someone else mentioned, I don’t understand the fascination with dinosaurs per se, (my son loves them, though) but I do understand having an odd fascination,(mine is history). It’s fun to read about women who were of a scientific bent at a time when it was even less socially acceptable to do so. Bravo for those brave women who were willing to buck the system and feed their passion!

You might all be interested in another book about Mary Anning’s life. It’s called “Curiosity” by Joan Thomas.

Excerpts form Reviews:
“Meticulous and deeply affecting. The traps of poverty and class, calcified notions of women’s place in science and society, fall away to reveal the hidden life below: the human mind and heart excavated with delicate and devastating skill.”
— Marina Endicott, author of Good to a Fault

“Curiosity is a delight. Set with marvels and rueful comedy, it’s a warmly intelligent feat of historical sympathy. Mary Anning of Lyme Regis, with her dead-reckoning gaze, moves through these pages like a muddy-booted angel.”
— Greg Hollingshead, author of Bedlam

“Rich. . . . [Thomas] practically burrows into the characters. Hers is magnificent prose that appeals to all the senses without grandiloquence. Equally important, Thomas handles the doctrinal debate raised by the then-budding field of geology with [great] subtlety and nuance.”
— The Toronto Star

“Right from its powerful opening, the novel buffets readers with the inescapable momentum of waves against the Dorset cliffs. . . . Curiosity is without question the best novel this reader has come across in the past year. . . . Lush. . . . Thomas draws [her] characters with such depth, power, and heart tha they remain with the reader long after the novel’s covers are closed.”
— Quill & Quire [starred review]

“A brilliant, soulful, multi-layered novel. . . . We are drenched in all the sights, sounds and smells of the era [and] become privy to the ecstasy and the agony of the doomed love affair between the two main characters. . . . Lush prose, compelling narrative and vivid characters [make] this one of the best books of the spring publishing season.”
— Ottawa Citizen

“Extraordinary. . . . A timeless story, and an unforgettable one.”
— Edmonton Journal

“Gripping. . . . Mary Anning as portrayed by Joan Thomas stands in her own right as a memorable figure, vulnerable and indomitable at the same time.”
— National Post

“[Curiosity] explores the exquisite fragility of a love story that turns upon the lovers’ unblinking curiosity before the metaphysical change their work uncovers. . . . A beautiful, erudite, and deeply pleasurable work.”
— The Walrus

Janice, thanks for letting us know about Curiosity. It sounds like a must-read for me!