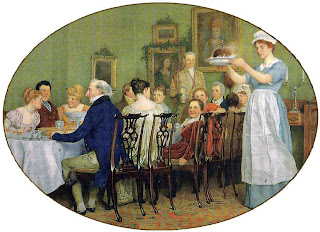 Stir Up Sunday is the Sunday before Advent begins, when, according to the Book of Common Prayer, the prayers begin:

Stir up, we beseech thee, O Lord the wills of thy faithful people, that they, plenteously bringing forth the fruit of good works, may of thee be plenteously rewarded, through Jesus Christ our Lord. Amen

Traditionally, the prayer read at Church was supposed to remind cooks that they should mix up their Christmas pudding.

This year Stir Up Sunday would have been on Nov 27, so I am a week late and my pudding will not be ready for Christmas.

To us Americans, pudding is some chocolate or vanilla or banana custard-like dessert, but English pudding is a mixture of lots of different ingredients, including some grain product.

In the Regency, meats such as beef or veal could be added to sugar, raisins, sherry, lemon, orange, prunes (the dried plums that give plum pudding its name), cinnamon, cloves, brown bread, and such unfamiliar (to me) ingredients as cochineal (a food dye made from insects), suet, sack (a wine from the Canary Isles), hock (another wine), and treacle (a sugar syrup).

Into the mixture was stirred a coin (for wealth), a ring (for marriage) and a thimble (for blessedness. Each member of the family stirred the mixture and made a wish. The mixture was then boiled in a cloth for hours, and hung on a hook to dry until Christmas.

On Christmas day, the pudding was covered with warm brandy and set aflame, making it a dramatic and exciting addition to the Christmas dinner.

If you would like to make a Christmas pudding for your Christmas the Regency way, you are too late, because it has to age to get the best effect and flavor. But never fear! Modern technology comes to the rescue:

And while you are waiting for your Christmas Pudding to be ready, you can play the Harlequin Historical Author’s Holiday Giveaway, based on the Advent calendar. We started a couple days after Stir Up Sunday and are going strong until Dec 23. Enter each day for chances to win daily prizes and for the most chances to win the grand prize of a Kindle Fire. If you’ve missed some days, go back and catch up. You’ll miss some prizes but not the grand prize.

What special “pudding” (aka dessert) do you make for the holiday season?

I used to make gingerbread houses, using royal icing as glue, and a variety of treats, i.e., an Oreo fence around the yard, gummy bears for shingles, tootsie rolls for the woodpile behind the house, marshmallow snowmen, candycane light posts with gumdrop light, M&M siding, and anything else my imagination thought up. Then a light sprinkling of powdered sugar at the end, to look like snow.

Diane, I had proper Christmas pudding when I lived in England and it was fine, but nothing I need to recreate myself!

One thing I always make is Grasshopper Squares, a very decadent mint chocolate brownie. It takes a while to make because each layer has to cool and harden before putting on the next, but it’s worth it. Once a year. 🙂

I’d much rather buy my pudding at Myers of Keswick or on my trip to England.

Um, November 27 was the first Sunday in Advent. So it would’ve been the Sunday before for Stir Up Sunday. (And I have to remember that for next year!)

Oh, yipes, Leanne. I can’t even do math!!! No wonder I’m too late for my pudding (unless I fire up the microwave…)

Elena and Judy, both the gingerbread house and the grasshopper squares sound fabulous and time-consuming!!!

We had English Christmas pudding the three years we lived in England and for several years after that as my mother learned how to make it from her friends in the village.

These days she makes some old family recipes we have had every Christmas for as long as I’ve been alive. She makes a Lane Cake, a Japanese Fruit Cake, Divinity, and my Mawmaw’s Chocolate Pie. Great! Now, I’m hungry!

Louisa, it sounds like your mother has a flair for Christmas tradition!!!