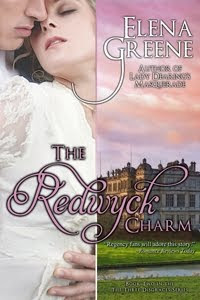 During the Regency, farces were short comic plays, generally performed after a full length drama on the same evening. But I’ll admit I’m not as familiar with Regency farces as I am with modern ones.

When I saw a TV rerun of the 1968 film version of “A Flea in Her Ear”, written by George Feydeau in 1907, with Rex Harrison and Rosemary Harris, I loved it: the mistaken identities, the timing, the sheer silliness. Since then I’ve seen a few live farces. The funniest of them is “Noises Off” by Michael Frayn, what he called a “farce from behind”, in which a troupe of actors stumble catastrophically through a farce and their mistakes are funnier than what was originally intended.

I like Regency romps too: romances that take some of those elements of farce and combine them with a love story. I’d call many of Georgette Heyer’s Regencies romps. Barbara Metzger did a great job with this type of story. In historical romance, Julia Quinn and Loretta Chase have written some fantastic Regency romps. It’s this sort of blend of romance and humor that I aimed for in THE REDWYCK CHARM, the second book in my “Three Disgraces” series, in which the heroine masquerades as an opera dancer and the hero pretends to be a rake.

Do you enjoy farces and romps? What are some of your favorites?

I’ll be giving away 5 Kindle copies of THE REDWYCK CHARM to commenters chosen at random. If you win, you can also nominate a friend to receive a free copy. Void where prohibited. You must be over 18. No purchase necessary. Post your comment by midnight EST on December 16. I will post an announcement on Saturday, December 17, so please check back to see if you have won.

And here’s a clip from the South Coast Repertory Company’s production of “Noises Off”.

I would love to have a copy of this book. Sounds like my kind of read.

I don’t think I’ve actually seen a Regency Romp but I do love Julia Quinn’s and Loretta Chase’s books so I think I’d enjoy this too.

I once saw Sheridan’s The Rival’s performed at the Folger Theatre. It was wonderfully silly.

The Unlikely Duchess by Mary Balogh is a wonderful romp.

So are our Janet’s books!!! The Rules of Gentility, Improper Relations, A Most Lamentable Comedy, Mr. Bishop and the Actress. You can’t miss with those!

I love Noises Off. Michael Caine in the film version is wonderful.

I love the farce and the romp. There is nothing better than being able to giggle as you read. I also really like that style movie of the 40s that Cary Grant and others did so well.

Noises off looks hilarious. Unfortunately I am drawing a complete blank for titles of farces I’ve enjoyed. I also enjoy reading Julia Quinn. Her books are fun.
janecharles522(at)gmail(dot)com

Romance and humor is a good thing and I would like to read this Regency romp story. I’ve read one by Loretta Chase and enjoyed it. Julia Quinn’s stories I haven’t yet.
Cambonified{at}yahoo{dot}com

I do enjoy farces and romps. My favorite is The Importance of Being Earnest by Oscar Wilde. And I love all of the Georgette Heyer books.

I love romance and humor! Can’t think of any authors right off hand, but can remember a book I read where the heroine was looking for a thief with the help of a Duke. It took her a while to figure it out, but the Duke was the thief and was keeping tabs on her progress. Of course he was a good thief and they had their HEA.

I would love to read THE REDWYCK CHARM. It sounds really good.

Sorry not to have been around earlier, it’s been a hectic though fun weekend! I see I’m not alone in appreciating a little nonsense. I’m envious of your chance to see The Rivals, Diane. I’ll have to check out the movie version of Noises Off.

Not a one from the Regency period, but when I think of farces, I think of Charlie’s Aunt. It has all the elements: people running from place to place, lots of door slamming, and mistaken identity!

I enjoy romps and farces. It is enjoyable following a story with mishaps, misunderstandings, misdirections, etc. all done tongue in cheek and for fun. I know I have read and watched many, but at the moment, I am drawing a blank on naming any of them.
One that does come to mind is a story where an older brother is on the trail of his sister to stop her elopement. He reluctantly teams up with the intended groom’s sister in a race through bad weather to prevent them from reaching Gretna and stop a marriage. It was fun.

I’m not sure what is a Regency Romp but I do remember a story by Julia Quinn called How to Marry a Marquis and that seems like it might be one.

Carla, now I remember seeing Charlie’s Aunt many years ago and I agree–another fun one.

Pat, that sounds like a story I’ve read too. Now I wish I could remember the title!

Maureen, How to Marry a Marquis is definitely a romp. It was the first Julia Quinn book I read. 🙂

I have a fondness for romps in books, but farces I prefer as plays or films. I saw “Noises Off” live on stage several years ago and loved it. The movie version is good too, but a farce is best seen live.