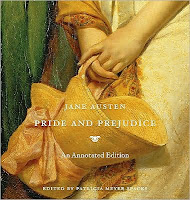 Jane Austen was born December 16, 1775. To commemorate her birthday, each year we devote the week to celebrating her life and the wonderful books that have endured and given us countless pleasure, much inspiration, and a love of the Regency.

This week, as we have done before, we are offering a prize to one lucky commenter, to be randomly selected from comments all week long. Comment every day! We’ll announce the winner by next Monday.
The winner will have the choice of either the annotated Pride and Prejudice or the new annotated Persuasion. These are beautiful editions! 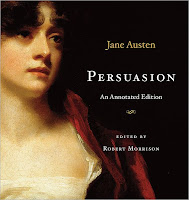 Birthdays were not the grand occasions for celebration in Jane Austen’s time as in our own, but Christmas could very well be. Jane’s Christmases often meant having visitors, and, because travel was such a difficulty, guests stayed a long time.
Gifts at Christmas were often made by loving hands, things like monogramed handkerchiefs or needle cases. There were plenty of games, however. Cards and charades and games of chess.
There might also be theatricals. As a child, Jane Austen wrote a one-act play at Christmas, about a daughter traveling to get married.
Jane also attended balls at Christmastime and, in a letter to her sister Cassandra, wrote of one:

There were twenty dances, and I danced them all without any fatigue. I was glad to find myself capable of dancing so much, and with so much satisfaction as I did; from my slender enjoyment of the Ashford Balls (as assemblies for dancing) I had not thought myself equal to it, but in cold weather and with few couples I fancy I could just as well dance for a week together as for half an hour. My black cap was openly admired by Mrs Lefroy, and secretly, I imagine by everybody else in the room

I wonder if acknowledgement of her birthday became lost in all these festivities and visitors? If so, it is fitting that we stop and remember it here at Risky Regencies.
Do you, or anyone you know have a birthday close to Christmas? Is it celebrated as a birthday might be the rest of the year? Or are you or they short-changed?
Remember, one lucky commenter will be selected by next Monday for her choice of the annotated edition of Pride and Prejudice or Persuasion.

My brother is December 14th, my sister is 23rd, my sister-in-law is Christmas day, and no, none of them are short changed, they insist on separate presents for both events. *g*

My birthday falls on January 2. It was celebrated separately from Christmas so I never felt short-changed. However, frequently it was the day we started back to school after the holiday break and I did feel short-changed by that.
lcbrower40(at)gmail(dot)com

I love this time of year, not just for the holidays but also because we celebrate Austen’s birthday and get to explore her life and work anew.

I personally would love to get an embroidered needle case 🙂

I have a nephew who’s birthday is Dec. 19 and I confess it often springs up on me because I am so distracted by everything else happening in Dec. My bad…

I have the Annotated P&P and it is one of my treasures. The Annotated Persuasion will give it some company on my coffee table 🙂

You can count me out of the contest portion… as for birthdays near Christmas – yeah, me. LOL The 22nd. And sis at the 15th, but the 22nd is a little tougher, especially back in school! LOL

My husband’s birthday is on the 15th. We celebrate it seperately, and I have to bake him a birthday apple pie. 🙂

I’m glad there are some attempts at celebrating the birthdays…but I still bet they would be different if they occurred in the Spring or early Fall.

My niece and nephews were born on Dec 6, 9 and 12. So, it’s always a big party for them. Their birthday is so unique because both sister and brother were born in Dec. Well, a double present then for them. What a great month it is.

I’m a summer baby so I never had to deal with my birthday conflicting with anything but friends’ vacations but I have a grand-nephew and grand-niece whose birthdays are Dec 19 & 22, respectively, and I do think they get short-changed a bit because of Christmas following so close behind. My hubby’s birthday is in Jan and I find myself picking and choosing gift ideas – give it to him for Christmas or save for his birthday. It can’t be helped even when we try. : )

Both my children were born in December and I have always been very clear on celebrating their birthdays seperately. My son is born on the 22nd so we would have his parties earlier in the month. I remember my son’s horror when a friend at school told him how his parents would take a present from under the tree, wrapped in Christmas paper, and tell him it was his birthday present.

A family member and a friend both share Jane Austen’s birthday, and it’s always been a little disappointing to them that it’s so close to Christmas. The 13th will become another family birthday tomorrow for the twin boy and girl that my niece is having. I’m thinking that a twin birthday will be a bit easier to keep separate from the holiday celebrations.

My son has a birthday on the 14th and when he was smaller had a birthday party and presents. Now that he is older it isn’t as big a deal but we still have presents and a cake, though not the big brouhaha we used to!

My birthday is Nov. 29th so it’s either mixed up with Thanksgiving or sometimes totally forgotten in the Christmas rush. I was always envious of my sister who had a summer birthday.

My birthday is December 29th. Growing up it always got overlooked in the bustle of Christmas. I always got one really nice Christmas gift, along with several little ones, but the big one was “for your Christmas and birthday too.”

I never had a birthday party as no one wanted a party four days after Christmas.

As an adult it has gotten better and my friends and family always make sure to at least send me a card for my birthday.

Myself and mt brothers all share December birthdays starting on the 3rd the last is on the 23rd. Whew talk about an expensive month!!

Maureen, what a terrible story about a birthday present pulled from under the Christmas tree.

catslady, Nov 29 is not good timing either.

Everybody, I knew I was right about Christmas birthdays!!

It is hard having a birthday so close to the holidays. It is very hard not to get lost in the shuffle. My brother’s is Han.2. By then nobody wants to see another party or cake.

Seriously though, I’m Jewish, so I never felt short-changed. It was always nice having a birthday where most people can take the day off.

My nephew was born on Dec 26th – so it is really hard now that he is school aged to properly celebrate his birthday when all his friends are so ‘busy’ with the whole holiday thing. So my sister (quite smartly, I must say) has designated the Saturday before Christmas (except this year, it was two saturdays since she didn’t want to do it on Christmas Eve) and has a large party for him. Which is great because she gives all his friend’s parents a chance to drop their kid off and run off Christmas shopping while the kids play.
dtchycat(at)charter(dot)net

No one in my family has a birthday near Christmas but my best friend from grade school does. I think she always felt cheated, not by her immediate family but by others.

I just want to agree that the first film version of Persuasion is my favorite JA movie adaptation ever! And the KK version of P&P is second.

My grandfather’s birthday is December 12, and he purposefully shortchanges his birthday.

Loved reading that little letter snippet from Jane to her sister. She was pretty fit to go 20 dances.

My mother’s birthday is the 22nd. As a child, her birthday was lumped in with Christmas so my dad has always made a big deal of us celebrating with presents, dining out, cake and everything so her day would be separate and special.

Those giveaway books look awesome. Thanks for the opportunity to win one.

when i was younger, i used to feel that those born in December were lucky, to celebrate a birthday AND Christmas in the same month; but as i got older, i realized that some would be shortchanged when it came to presents, and that they only celebrate in one month, while most others celebrate 2 big days in separate months…….

thank you for this giveaway!!!
cyn209(at)juno(dot)com

My grandmother’s birthday is December 29th. We make a point of always giving her a real birthday party and separate presents, because I think it sometimes did get overlooked when she was young.

I know other people whose birthdays fall on or close to Christmas, and some loved it and others hated it. The “one extra big present to cover both occasions” thing seems to be universally unpopular, which really doesn’t surprise me, as for kids at least it’s not the size of the presents but the number that matters.

I suspect it was less likely for Jane’s birthday to be lost in the Christmas rush than it would be now, because very sensibly they limited the celebrations to Christmas Eve onwards.

I would love to have the annotated Persuasion – my favorite of her books.

My son has a birthday on 2nd February. I always shop for his birthday & Christmas at the same time. Otherwise the time has just disappeared after the holidays.

My sons is November 29th. My daughter January 6. No December birthdays.
Thank you for the chance.
Wendy
wdesirees[at]yahoo[dot]com