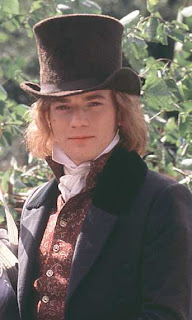 As far as I can recall, Jane Austen never used the term “rake” in her stories, but it’s my understanding that during her time, it had a different spin than we put on it in modern historical romances. Jane’s villains tend to be what might have been called rakes; their common trait is they take advantage (or try to) of women in the stories. Her heroines always end up with the good guys.

Jane’s bad boys aren’t all equally villainous and I have a little more sympathy for some than others. Actors’ interpretations can bring out nuances, too.

Frank Churchill from Emma is the lightweight, more selfish puppy than dark schemer. I can’t remember enough of other portrayals of Frank Churchill to judge, but here’s Ewan McGregor in the 1996 (Gwyneth Paltrow) version.

At the other extreme, Pride & Prejudice’s Wickham is pretty loathsome. Here are Adrian Lukis and Rupert Friend, from the 1995 and 2005 versions, respectively. I think Lukis’s Wickham is a little too obvious to fool Elizabeth. Friend, on the other hand, has a gaunt look about him that makes him seem more vulnerable and thus more deceptive. 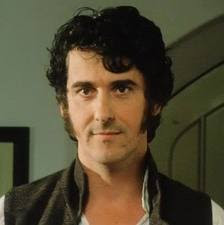 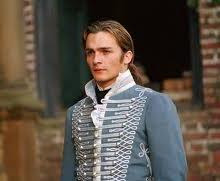 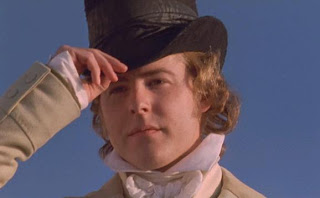 William Elliot from Persuasion is another villain without redeeming qualities, but at least Anne sees through him pretty quickly. Here’s Samuel West, from the 1995 film that is my favorite adaptations. Honestly, I can’t remember other portrayals. I need to watch more Austen movies over the holiday break!

Willoughby (Sense & Sensbility) is more interesting. Dominic Cooper in the new version seemed kind of a toad; I prefer Greg Wise’s portrayal in the 1995 (Emma Thompson) version. He gives the sense that he will regret giving up Marianne for the rest of his life. Though perhaps he deserves his fate, I can’t help feeling a little sorry for him. 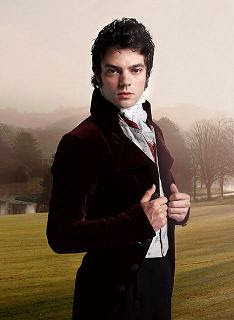 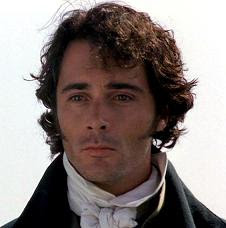 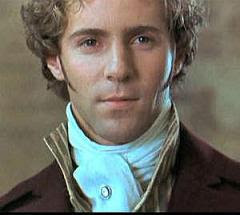 I also find Henry Crawford from Mansfield Park intriguing. Although I haven’t yet seem a film version of MP that I liked, here’s Alessandro Nivola in the 1999 version.

Although I find these last two the most well rounded as villains, they’re still not quite the reformable rakes of historical romance, who may get around but don’t treat women as badly.

Comment for the chance to win either the annotated copy of Pride & Prejudice or Persuasion. Our Jane Austen Week winner will be announced on Monday.

And congratulations to the following winners of the Kindle ebook of THE REDWYCK CHARM. Please send your email address, and if you wish, the email address of a friend who might enjoy a copy, to elena @ elenagreene.com (no spaces).

Until now, I hadn’t thought of Frank Churchill as being in the same category as Willoughby etc.. He always stirkes me more as a spolit brat than a wicked schemer, although I suppose they do share the characteristic of extreme selfishness.

I enjoyed your side-by-side comparison pictures of Wickham and Willoughby. To me they are the most interesting of Jane’s villains. And I totally agree that Dominic Cooper is something of a “toad”. The other Willoughby becomes a bit sympathetic. Thanks for the giveaway. I’ve been wanting one of the annotated versions of Jane’s classics.

I agree with all you’ve said, Greg Wise is still the favourite Willoughby although I do think Dominic Cooper is gorgeous.

I’ve seen most of the same adaptations and have yet to see an adaptation of Mansfield Park that I’ve really liked.

I loved Greg Wise’s portrayal of Willoughby, so add me to the list! I wound up having far more sympathy for him than for Ewan’s Frank Churchill.

I don’t know, I always felt like Henry Crawford was a prototype “reformable rake.” Austen mentions in the final chapter that Fanny had begun to influence him, and he her, implying that if he hadn’t succumbed to the temptation of testing his power over Maria, he and Fanny would have been a happy couple.

Of course, he does succumb, so Austen treats it pretty realistically, acknowledging how difficult it is for people to reform.

I agree that Greg Wise is the better Willoughby, and I do feel that he understands fully what the loss of Marianne will be in his life.

I have a soft spot for Henry Crawford and think that he and Fanny might have had a good marriage after all.

Fingers crossed for the Annotated Persuasion.

I have to say that I kind of liked Nivolas Henry Crawford. I always felt sorry for him in the movies, when she first excepted his proposal and than refused it.

I agree that Frank Churchill is little league compared to the rest. I like to think he will improve.

I guess I’m not alone in liking Greg Wise’s Willoughby, or thinking that Crawford approaches reformable.

Just to clarify, I did enjoy the 1999 Mansfield Park as a film, but I’d like to see a version that is more faithful to the book.

Elena, I think your assessments of Jane’s bad boys are spot on, with the possible exception of Frank Churchill, who has always seemed more mischievous than bad. In my opinion, Jane’s bad boys aren’t as well drawn as her heroes, which may be why the villains vary so dramatically in the movie versions.

This was an interesting comparison study. For me, no matter who acts the part, there is just no sympathy for Wickham since he schemed against two 15 year old girls. Frank Churchill has always been an annoying immature trickster that I never understood how Jane could be fascinated in him. Walter Elliot is just a cold schemer no matter what. Its Henry Crawford and John Willoughby that have me at a sticking point because in the upper circles their behavior would not be all that unusual. Crawford’s indiscretion was caught out, but it was common for married women to have lovers back then. Willoughby is reprehensible for seducing a virgin, but marrying a rich gal- again not that uncommon. I think the Greg Wise Willoughby helps me overlook that seduction a teensy bit, but not much. As to the man portraying Henry Crawford, he did make me sympathetic to his frustration in being unable to move Fanny. That was fun to think about.

Thanks for the giveaway opportunity. I would love the chance for an annotated version of the novel.
sophiarose1816@gmail.com

Congrats to the winners of their books.

Great recap of the film versions of Jane’s Bad Boys. (Sounds like a great name for a rock band.)

My two favorites are Friend’s portrayal of Wickham and Wise’s portrayal of Willoughby. I like my “villains” multi-faceted, with shades of dark of and light. These two actors do fabulous jobs of that.

I agree with Courtney here — I think Henry Crawford is very like a classic Regency rake. So…why did he go to the bad? Was it because Austen didn’t believe his sort were really reformable? Or was it because Fanny didn’t love him back? Interesting question…

My entire adult life I’ve wanted to have two dogs and name them Wickham and Willoughby.

I like Greg Wise’s Willoughby, and the best part is that he and Emma Thompson wound up a couple in RL. Also preferred Rupert Friend as Wickham to Adrian Lukis, but that is simply a matter of personal taste. Wickham is supposed to be so handsome that he fools everyone; they assume his good looks mean he is a good person. I think Friend is far better looking than Lukis, so in that sense he made a more believable Wickham to me. OTOH, Wickham had so little screen time in the 2005 movie, that it’s a bit hard to say that Friend’s portrayal was better.

Agree with those who think Henry Crawford would have made an interesting romance hero. I liked that he made the effort to be a better person with Fanny, and over time I think the transformation could have worked its way deeper into his soul. Not to mention that perhaps he could have made Fanny less of a prig.

Congratulations to the winners.

You did an excellent job of comparing Jane’s rakes. The difference in definition makes a big difference. Today’s romances with the reformable rake wouldn’t quite fit.